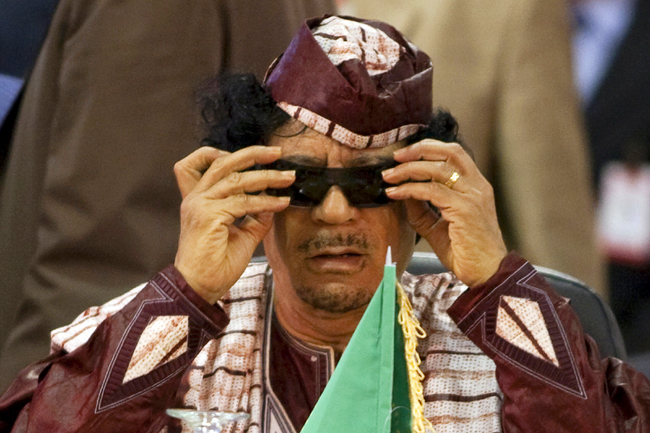 Gaddafi calls for jihad against Switzerland

A top UN staffer in Geneva says Libyan leader Muammar Gaddafi’s call for a jihad, or holy war, against Switzerland is just not on in the context of international relations. It sounds as if Gaddafi’s reverting to his old ways, after the West spent years trying to rehabilitate his country from being a “chief sponsor of global terrorism”. Gaddafi and the Swiss have been at loggerheads over numerous issues. Recently the Swiss voted against the building of minarets on mosques in their picturesque country, and one of Gaddafi’s sons was arrested in Geneva on charges of assaulting two servants. The Libyans later arrested two Swiss businessmen, one of whom has now been jailed. The Libyan leader made his jihad call while marking the birthday of Muhammad, saying that apart from fighting Zionism and foreign aggression, any Muslim who supports Switzerland is against Muhammad, Allah and the Koran. That sounds just like the man the world knows and loves. As part of its ongoing battle with the Swiss, Libya stopped issuing visas to citizens from Schengen nations in Europe, after the Swiss banned young Gaddafi and nearly 200 other Libyan officials from entering their country. Photo: Reuters.

Many killed in Timbuktu mosque stampede

At least 26 people, mostly women and children, have been killed in a stampede at Mali’s largest mosque in Timbuktu. A local tour guide told the BBC that up to 25,000 people walk three times around the Djinguereber mosque each year during a festival to mark the prophet Muhammad’s birthday. Reports say an elderly woman fell down and dozens of others were then trampled to death at the 14th century building.

The radical Islamist group al-Shabaab has ordered the UN’s World Food Programme to stop all operations and leave Somalia. This is a step-up from an earlier al-Shabaab statement that ordered the agency to stop importing food aid and source it from Somali farmers instead. The WFP has also had to dismiss accusations that some of its employees diverted food to militants, so things are really out of control. Al-Shabaab says food aid has negatively impacted on local farmers, accused the UN agency of handing out expired food and helping its enemies in neighbouring Ethiopia. The group says anyone found working with the agency will be guilty of aiding in the destruction of the economy. That’s a nasty injunction devised to give al-Shabaab even greater control over the central and southern regions of the anarchic country. It’ll be interesting to see how the UN responds.

Comments from Nigerian information minister Dora Akunyili in a local newspaper indicate just how much of a power struggle is going on in that country. She says a “cabal” around President Umaru Yar’Adua is trying to take back executive control after his return from a three-month stay in a Saudi Arabian hospital where he was treated for heart problems. Parliament recently transferred power to Yar’Adua’s deputy, Vice President Goodluck Jonathan, in a move that has been condemned as unconstitutional in many quarters and is now the subject of numerous court cases. Yar’Adua’s absence from office earlier divided the nation’s cabinet and senate, and state governors and media barons called for him to step down. His continuing absence from office may now have divided even the cabinet. Akunyili is the first minister to openly criticise the perceived bureaucratic paralysis which has threatened an amnesty for rebels in the oil-producing Niger Delta, among many other issues, at a time when the country is preparing for elections.

Ivory Coast’s opposition groupings now say they’re ready to join a new unity government, after earlier criticising President Laurent Gbagbo for dissolving both government and the country’s electoral commission, which he claimed was illegally registering non-Ivorian citizens as voters. Gbagbo’s actions further delayed elections that should have been held in 2005, sparking deadly riots across the nation. Critics say Gbagbo’s actions were calculated to stop people voting against him, after he accused the commission of fraud and being controlled by the opposition. Authorities have now named a new election commission, also headed by the opposition – so it’s not certain if the politicking and accusations of fraud will stop. But opposition groups have now agreed to take 11 seats reserved for them in the 27-member cabinet, and say they’ll suspend all protests. The country was split into a largely Muslim rebel-held north and ruling south after a 2002/03 civil war. Ethnicity was at the heart of the fighting.

Sudan’s fractious first multiparty elections in 24 years are drawing nigh, so a deal that gives an extra 40 seats in parliament for parties from the oil-rich, but far-less-populous south of the country, could be a boon for democracy and help promote stability. Under a 2005 peace deal that ended a 22-year civil war between the north and south of the country, the April election is due to be followed by a referendum on secession for the south of the country. But the parties were deadlocked after some in the south feared the north could use its majority to block this. Until now, parliamentary seats reflected population distribution, which meant northern MPs would be able to change the constitution at will. The extra seats mean southern parties now have the power to veto constitutional changes, despite the new seats only being allocated after the election. But the referendum will only go ahead if 50% of the people plus one vote in favour of it in the poll.

Ugandan president appoints son as head of his security

Ugandan President Yoweri Museveni has placed the presidential guard under an elite army unit commanded by his son. The opposition now fears he’s grooming his progeny for a dynastic succession after some 24 years in power. The army says the unit is also responsible for preventing terrorist attacks and providing security for recently discovered crude oil reserves on the border with the chaotic Democratic Republic of Congo. The opposition says the president has a habit of putting his relatives in influential positions and sees his latest move as just one more act of nepotism. Museveni is expected to stand for re-election in February next year, having shown signs of wanting to remain in power for life.