Die Antwoord pays its dues for the last time, but Inter... 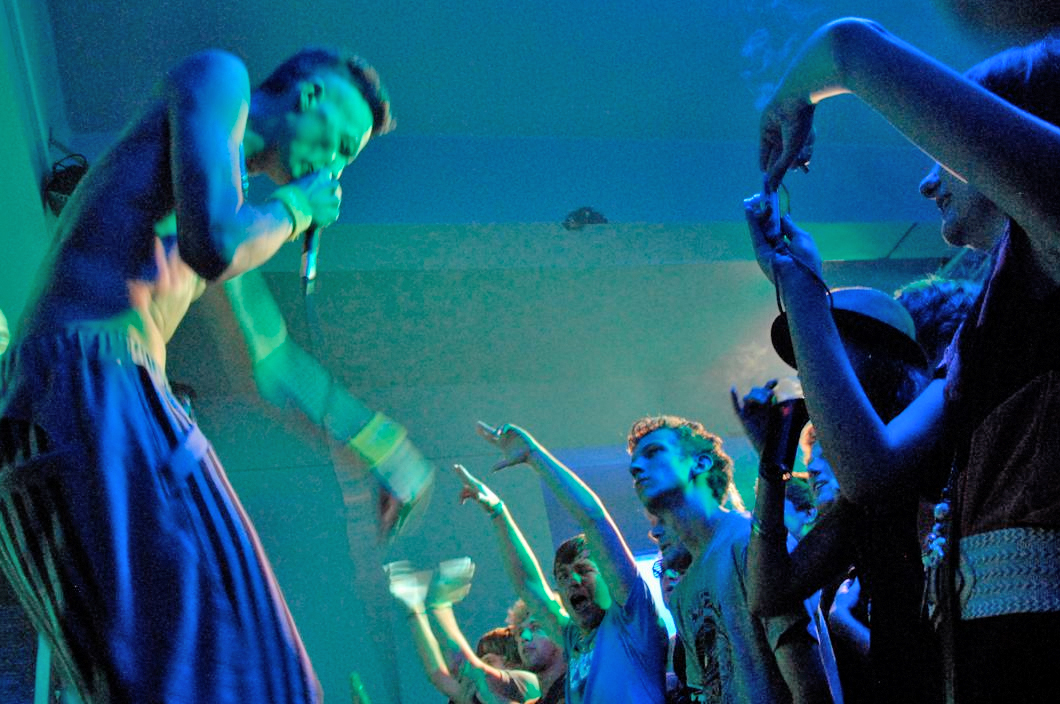 The mostly Afrikaans, mostly rap group fronted by musician Watkin Tudor Jones (in the persona of a dude called Ninja) and his classically-trained partner, Yolandi Visser (in the persona of Ninja’s white-trash neighbour Yo-landi) went from fringe to mainstream in the blink of an eye. But even though monetary success now seems inevitable, the transition from online hype to real-world results isn’t immediate.

Kunskafee, Durbanville, Cape Town, early Friday night. In Durbanville, on the outskirts of Cape Town, 30 young people hang about on the pavement outside a tiny music venue of no particular charm, waiting to find out when the doors will open and whether the gig will still be cancelled now that a new sound engineer has been summoned. Over the course of the next four hours the crowd will swell to a respectable 200 or so, and Die Antwoord will indeed play a memorable set. Over the same period of time tens of thousands of people from all over the world will discover the band online, through Facebook, Twitter and an ever-growing number of blog posts. Thousands of those will declare themselves fans and spread the word to thousands more, using those same tools. The true fans will start clamouring to buy CDs and merchandise, and to otherwise spend money in order to have some relationship with the group. Back in the real world, at the door of the venue, the first batch of arrivals get a free, hand-made copy of the upcoming album in return for their R50 cover charge.

You can’t blame the real world for not keeping up with what was going down online. On Monday Die Antwoord was an interesting experiment being watched closely by a small fan base and a smaller group of music journalists and other cultural observers. By Friday it was polarising opinions from New York to Moscow, with both expressions of disgust and offers of gigs all over the world flooding in. The numbers were astonishing. For a South African outfit, anyway. “Something fucking strange has fucking happened,” Jones tells the crowd in Durbanville, explaining that the group’s server (which hosts its entire upcoming album free for the listening) had served more than a terabyte of data in the previous two days. “If it was a Souf Efrican server I’d have to sell my father, sell my mother’s house,” he says, in reference to the high price of bandwidth in South Africa.

The group won’t be bearing the cost of its sudden popularity; that is being taken care of by companies like Google. Its music videos are streamed by Google-owned YouTube, and most of the discussion about it happens on Facebook and Twitter or third-party blogs and news websites. Its own server is hosted in the USA, the land of milk and honey and bandwidth so cheap it’s nearly free. Its demo CDs are created on a home computer at a price that can be measured in cents per unit, and even its very slick and highly stylised videos were made for next to nothing.

But neither is the group making any money out of the phenomenon. All its music is free for the taking and it has no merchandise to sell. It runs no advertising on its website, and doesn’t get a cut of whatever revenues Facebook or Google generate. While millions of people were enjoying their music, they were splitting the door take at the house. At a couple of thousand rands a piece for a couple of hours work that is money many starving artists wouldn’t sneer at, but it’s hardly the big time. The days of living off small change is almost certainly over, however. If the trend of online popularity continues – and there’s no indication of burnout yet – then Die Antwoord won’t be playing a venue with a capacity of less than a thousand people again until MTV comes knocking to record an unplugged session. When the album does hit stores in South Africa, which is due some time in February, it will also become available online through retailers that will ship anywhere in the world. There is already an endorsement deal with Puma in place, and other sponsorships will come. Then there are the ringtones, and the wallpapers, and the posters, and all the rest. The money will roll in, and the opportunity to expand the brand and leverage the success will be there – as long as the music continues to resonate with the new fans.

What those fans will look like once the dust settles, that we don’t know. On Friday the crowd was young, white, suburban and Afrikaans, with good shoes and better hair. The venue wasn’t particularly ghetto either; just a stone-throw away from a Woolworths food store where, as Visser’s character would put it, the rich bitches shop.

The inspiration for almost all Die Antwoord’s music is drawn from coloured culture, both from the drug-plagued Cape Flats and the Western Cape’s prisons, where rival gangs rule through violence and intimidation. The lyrics are almost unbelievably outrageous; if it were directly translated into images it would be banned in most parts of the world for associating sex with extreme violence, just for starters. But for all their adoration of this music, the audience isn’t particularly rough. At the Durbanville gig, as the beat got more thumping, two teenagers had a quick, shouted discussion. They grinned at each other, took a short run-up and executed a slow but passable chest-bump. As they shot apart, one knocked into a girl standing nearby, making her stumble. Both young men immediately apologised profusely, and for the rest of the set they danced demurely on the spot, taking care not to invade the personal space of those around them despite the crush.

Those two were probably attracted to the gig by the superficial hard-case persona of Ninja, who threatens violence with his every expression. The older members of the audience further back, the ones who were smiling with tolerant amusement at their antics, may have been there because the intriguing dichotomy lurking behind that facade, and the sheer brilliance of Jones’ method acting. Others were happy to admit that they’d come purely for the sake of the strange white-trash sexuality that Yo-landi oozes out of every pore. These different elements each attracts a different audience segment, but they have some things in common. One is a much, much higher level of disposable income than most people who hail from the Cape Flats could ever dream of.

Jones doesn’t grant interviews these days, and the Ninja character is either too cool or too stupid (or possibly both) to answer any meaningful questions. Even so, one can’t help but get the sense that, while Jones realises he’s on the brink of enormous commercial success, it scares the hell out of him. Backstage, after the show, I ask him whether it marked the end of an era, whether it will be the last time Die Antwood will be paying dues rather than rolling in the money. He nods a couple of times, nervously and distractedly. Then he gets up and writes “NINJA wa5 here” on the wall, finishing off the message with a crudely rendered penis half a meter long, taking particular care to ensure that the testicles are hairy.

(Interested in South African media and culture? Then you may want to read how Charlize Theron kissed a girl but couldn’t swing a meeting with Nelson Mandela, about the trouble with a biopic on Winnie Mandela, how locals felt about the movie Invictus, and how Tim Rice is involved in a movie about South Africa’s most famous dog.)