Editor of the Guardian sees bright future for journalis...

Editor of the Guardian sees bright future for journalism 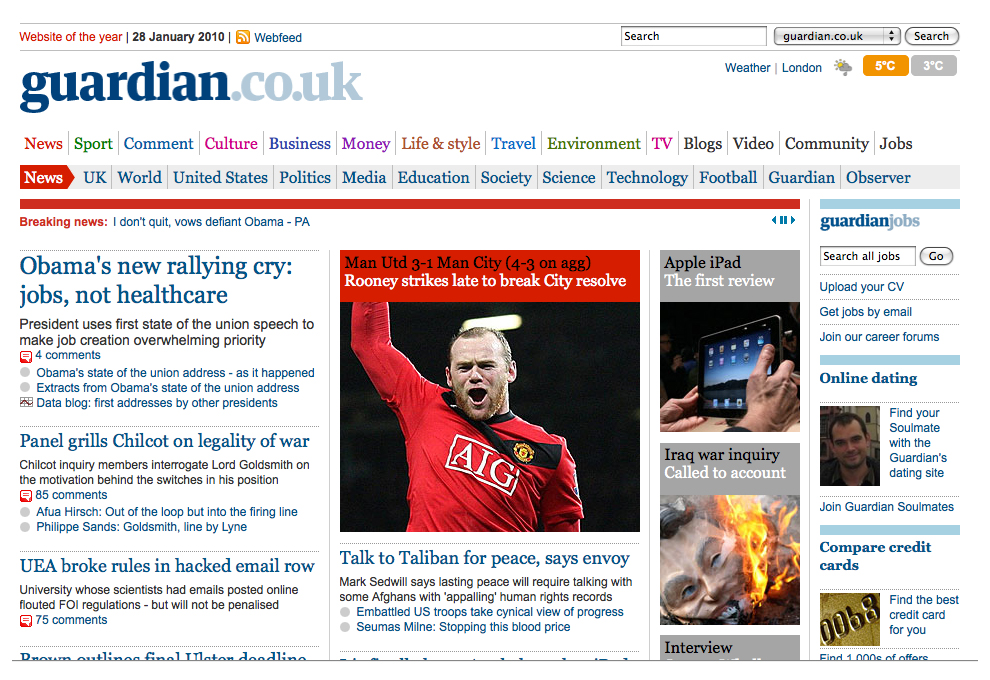 The end may no longer be nigh. Alan Rusbridger, editor of the Guardian, the newspaper with the second-largest reach in the English-speaking world, gives journalists a reason to stop kvetching.

If recent history is anything to go by, the question of online pay walls can be answered two ways: simply, or via an exceedingly complex maze of further questions. Guardian editor Alan Rusbridger, during a lecture delivered last week to a roomful of heavyweight media types, used both methods. It was arguably the most insightful riff on the dilemma since Clayton Shirky’s seminal “Newspapers and thinking the unthinkable”, and it had a title that seriously upped the ante on provocation: “Does journalism exist?”

On the simple level, Rusbridger’s response to the problem of pay walls went like this – at his newspaper, it’s not gonna happen. He used an editorial example to explain why. On January 12th, he said, the Guardian scooped the world with the momentous story that Google was about to drop censorship in China. The story, which blanketed the planet in seconds, would have been a non-starter if the Guardian’s website wasn’t “open”.

How so? Firstly, said Rusbridger, because it wasn’t the sort of story that editors could have waited to publish in print – Google was set to post the news to its own blog a few minutes after the Guardian’s exclusive. And secondly, because it would have been plain dumb to publish digitally in the hope that people would buy a day-pass to read it – by then, according to Rusbridger, “the story would have been Twittered into global ubiquity.”

In commercial terms, Rusbridger’s argument was that charging for online content is just as counter-productive. He repeated the observation of Sir Martin Sorrell, a man who “makes weather in advertising, the same as Rupert Murdoch does in print,” that by 2014 forty to fifty percent of WPP’s total advertising spend would be online (WPP, incidentally, operates in 106 countries and is responsible for US$60-billion a year in advertising billings).

It’s in this belief that online advertising is set for huge growth that men like Rusbridger – as opposed to men like Murdoch – find their confidence. “My commercial colleagues at the Guardian,” said Rusbridger, “are very focused on that, want to grow a large audience for our content and for advertisers, and can’t presently see the benefits of choking off growth in return for the relatively modest sums we think we would get from universal charging for digital content. Last year we earned £25m from digital advertising – not enough to sustain the legacy print business, but not trivial. My commercial colleagues believe we would earn a fraction of that from any known pay wall model.”

Of course, to argue that the Guardian is exempt from the paid-vs-free debate because it’s a loss-making entity supported by a rich trust is easy. More difficult is dealing with Rusbridger’s anticipation of the critique. “[All] the Scott Trust does is to enable the Guardian to compete on the same more or less level playing field as a host of other loss-making papers, whether their own cross-subsidies come from large international media businesses, Russian oligarch billions or unrelated companies within the same ownership or group.”

As Rusbridger well knows, if the competition is the benchmark, it doesn’t get much better than the Guardian. It’s the second-best read newspaper in the English-speaking world, and may soon take over first place from the New York Times, which just last week announced its intention to start charging for online access. In December 2009, said Rusbridger, his paper’s journalism was read by a staggering 37 million people – a third from the US, a third from the UK, and a third from the rest of the globe.

That, then, is Rusbridger’s simple answer to the problem of online pay walls: if you’re a good newspaper with the sort of journalists that people around the world want to read, you’d be stupid not to wait a few more years for the real advertising to kick in.

So what was his complex answer? It was a bit ambiguous, a bit sentimental and fuzzy, which was probably unavoidable – as Clay Shirky himself said, the nature of a revolution is that nobody knows what’s coming next. But it was also generous and expansive, a far cry from the suicidal mutterings we’re used to from the newspaper sector.

Rusbridger referred to his idea as the “mutualised news organisation” and, yes, journalism as we know it – or the best examples of this thing called journalism – does exist within the framework.

“We are edging away from the binary sterility of the debate between mainstream media and new forms which were supposed to replace us,” Rusbridger said. “We feel as if we are edging towards a new world in which we bring important things to the table – editing; reporting; areas of expertise; access; a title, or brand, that people trust; ethical professional standards and an extremely large community of readers.

“The members of that community could not hope to aspire to anything like that audience or reach on their own; they bring us a rich diversity, specialist expertise and on the ground reporting that we couldn’t possibly hope to achieve without including them in what we do.”

It’s sentimental, granted, but it’s about time we got some romance to offset the tragedy.