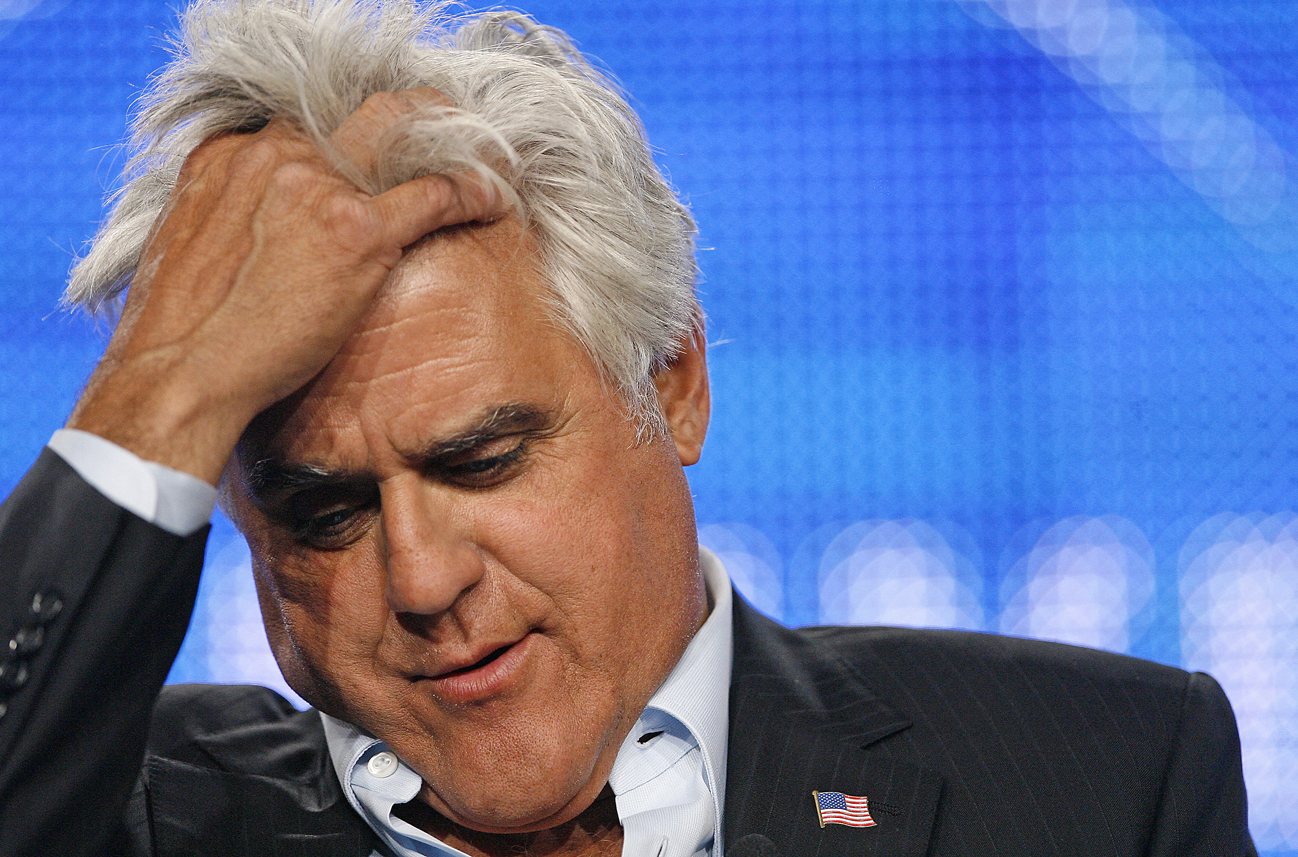 While millions of desperate Haitians cling to life and Nigeria is breaking out in inter-religious rioting, many Americans are hypnotised by a titanic struggle over who will be on the NBC TV airwaves “right after your local news”. That should clarify what is really important on this planet.

The Tonight Show has been a fixture on American television since there was light on the screen. In the beginning there was Steve Allen (who sometimes played the piano and who interviewed the chimpanzee, Jay Fred Muggs, on TV). Then Steve Allen begat Jack Paar (the host who sometimes cried at his guests’ stories). Jack Paar begat Johnny Carson, who ruled the electronic landscape for nigh unto thirty years, aided by his intensely loyal second banana, Ed McMahon. And it was good, very good – for NBC, its stockholders, the show’s advertisers, and its affiliate television stations throughout the land, unto all the inhabitants thereof.

Johnny Carson then begat Jay Leno. And Leno’s 17-year rule was almost as fruitful as that of the sainted Carson. And thus, in the fullness of time, Jay Leno, himself, begat the red-haired Conan O’Brien, whose off-beat humour had charmed insomniacs for more than a decade. And it was good too. Or so it seemed at first. But there was trouble in the electronic kingdom and brother rose up against brother, and no man was comfortable in his own house as husband, wife, children, fought over who would hold the remote control. And this was not so good after all. Photo: Conan O’Brien ruled the US late night scene for 16 years before getting the Tonight gig. REUTERS/Mike Blake

Over the years, numerous pretenders have attempted to seize the airwaves during those late night hours. There was (and still is) David Letterman at rival CBS. Dick Cavett and Charlie Rose have been niche tastes for those who read thick books without pictures (or would like to), and for a while, at least, Arsenio Hall was the with-it viewer’s choice. Hall helped launch some guy named Bill Clinton into the American national political arena when Clinton wore Ray-Bans and played the saxophone on air to demonstrate that he was daddy cool for a new generation of voters. Of course, Oprah Winfrey owns the daytime – but that’s a different thing altogether.

Over half a century, the American television evening schedule clock has come to have a nearly fixed-in-stone flow to it. First up, there is the local, city-by-city evening news. This leads into the national news broadcast. Next are locally syndicated shows for a half hour (a segment sometimes derisorily termed the dog-walk slot because of what so many people do at that hour). Then there are several sit-coms in a row, then a more serious drama show. Next up is late evening news/weather/sports that, finally, lead into the Tonight Show (or its rivals) from 11:30pm onwards. After that there might be late movies or a follow-on clone of the Tonight Show.

Looking back, the television landscape of the early 1990s seems almost like an alien landscape now – a sort of specially nurtured garden, just before a tumult of opportunistic species invaded the greensward. For decades, there were the three networks, ABC, NBC and CBS, and the occasional independent station in a few of the biggest markets. There was also the Public Broadcast Service. PBS captured a few percent of overall viewers with its mix of highbrow music, dance, opera, imports from the BBC and so forth. But, basically, the three main networks owned it all.

Then came the deluge. The Fox and WB networks signed up independent stations and opened new ones, cable TV came into being and suddenly almost every house could get 500 programme choices (CNN, MSNBC, Fox News, the cooking channel, the sci-fi channel, Spanish language Telemundo, sports, sports and more sports). Now, most recently, television via broadband computer access is rapidly gaining ground. An increasing number of Americans are actually giving up on the schedules of broadcast TV entirely, taking only the shows they want to watch from the new broadband distributions or using a TiVO to record the shows they want to watch, when they want.

The result for the so-called big three networks has become increasingly and depressingly similar to what has happened to Detroit’s big three car manufacturers. Fifteen years ago, like GM, NBC nearly ruled the electronic landscape with its stellar line-up of sitcoms such as Seinfeld, Friends, Frasier, and Will and Grace, and then the drama serials such as Law and Order and ER. This passed a tidal wave of viewers on to the Late Show with Jay Leno. But, once the crumbling of the big three began, niche audiences were the happening thing. A show such as ER, that drew 15 million to 16 million TV sets in its prime (there is a semi-theological argument about counting viewers or numbers of sets on, but we’ll leave that for another time), was only drawing 5 million or so towards the end of its run.

Then, in the fullness of time, NBC–Universal head (NBC had been sold and resold to various conglomerates from its origins as the broadcaster of manufacturer RCA), Jerry Zucker, wunderkind programme developer became head of the whole NBC pea patch. In an effort to keep Jay Leno under contract and on NBC’s now-crumbling airwaves and stop Conan O’Brien jumping to another broadcast or cable network, Zucker appointed O’Brien as Leno’s successor for the coveted title of Tonight Show host. And he created a new programme from 10pm to 11pm for Jay Leno that would essentially be the same thing he had been doing later in the evening. For Zucker, this would be a two-for-one deal – he’d keep both stars happy, keep the advertisers reasonably happy and allow for the different audience categories to find their favourite host – or learn to love a new one.

Photo: NBC-Universal boss, Jerry Zucker, will have to explain to his new bosses at Comcast just how exactly he lost couple of hundreds of millions on shuffling the NBC’s evening line-up. He better come up with a solution fast. REUTERS/Shannon Stapleton

Couldn’t fail. Except that it did. It seems people don’t like to watch a talk show that early in the evening – that the pattern of news, comedy, drama, news, talk show is so ingrained that this new great idea turned them off – and they turned off the network. Now Zucker was in big trouble. Bigger trouble followed. Not only had he not found new comedy and drama replacements for the old reliables that used to be NBC’s gold standard, but his shake-up of the late night system didn’t work either.

What to do? It seems the answer was: when in doubt, make it worse. NBC decided to put Jay Leno back on after the news and ask (rather, tell) O’Brien to go back to the midnight hour. Well, Leno was happy enough, although the Internet and blogosphere were crackling with criticism of him for throwing his weight around and taking back his old spot. But O’Brien rebelled at the switcheroo, and was poised to take his contract buyout/severance money and jump to another network, especially now that he had public opinion in his corner.

The irony is that between Leno and O’Brien – and Letterman as well, sniping from the CBS sidelines – a three-sided “war” of jokes and wisecracks about this situation has been raging. And their ratings, all three of them, have been better than they had been in years. A cynic might be forgiven for suggesting they planned the whole thing to boost ratings.

Amazingly, literally as I was typing this sentence, I received an email from The New York Times that reads: “NBC says it has reached a deal with Conan O’Brien to leave ‘The Tonight Show’, allowing Jay Leno to return to the late-night program he hosted for 17 years. The deal is worth a reported $44 million. A network spokeswoman confirmed the deal to The Associated Press early (on) Thursday, but did not offer any other details.” Really. The only problem now is where O’Brien will end up on air – and will enough people decide to watch him on his new network to make a difference.

As for me? I’d take the money, go buy a bodacious home in the Seychelles and write my book.

Main photo: Jay Leno emerged as the winner of the battle of comedic titans. REUTERS/Mario Anzuoni

Watch: Jay Leno and Conan O’Brien take shots at each other: