Bafana’s lucky charmer is back

Bafana’s lucky charmer is back 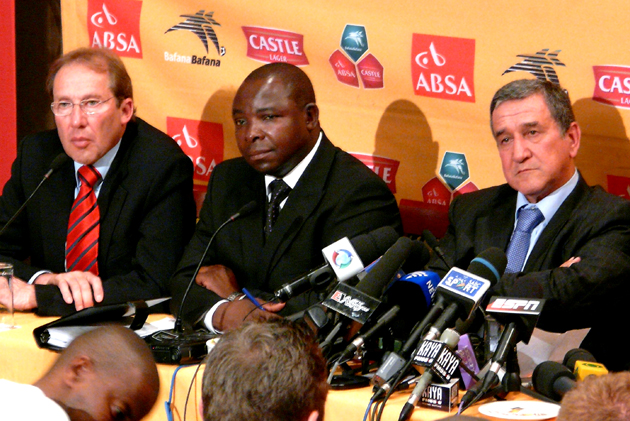 Bafana Bafana coach Carlos Perreira is glad to be back. And by all accounts, “The Boys” like him too, so expect some samba in outings against Japan and Jamaica later this month.

Soccer body Safa hauled the Brazilian 1994 World Cup winner in front of the media on Friday, a day after he landed back in the country. First up he spoke about the worry of his wife’s battle with cancer, but now she will join him as he finishes the job.

He immediately made it clear he wasn’t here for the money, having had plenty of employment offers in the time he was away. Instead he spoke in plain English about the honour of leading the home team in 2010: “In terms of reality, the World Cup is a war. You have to be a warrior. We’re ready to fight against lions and tigers.”

Perreira took charge of 21 games his first time around; winning nine, drawing six and losing six. His successor Joel Santana played 27, won 10, drew three and lost 14 – losing eight of his last nine friendlies on his way out the door. Perreira appears confident that he can assemble the best on offer and turn the ship around. He and Santana have used 140 players since 2007, so expect him to speak in his native tongue to the former coach, and whittle away the wheat from the chaff.

“I would not have accepted this position if I did not think Bafana had the ability to get past the knockout stages,” he said. “After that the sky is the limit. A quarterfinal place is achievable.” But there’s residual cynicism as to why Safa would appoint the man who bequeathed the country a lemon, albeit maybe Bafana was the one that needed squeezing.

“I didn’t want to leave Rio except for a very special reason, which is this one,” a beaming Perreira said. But he’s not really leaving the Copacabana behind. The South Africans will spend time training in his native land, where he will implement the philosophy behind the Brazilian game. Many teams and players have done this, he says. “Bafana Bafana are going to play at least ten games in Brazil. There’s no better way to get the feeling for Brazilian football.”

Superstar Ronaldo says Bafana is a good team. And there is ability behind the celebrity shenanigans of a bunch of charmed and spoilt young men. Perreira says he will use all the talent at his disposal, and even Blackburn Rovers bad boy Benni McCarthy is back in the mix. “We will get him fit, and fight to have him,” Perreira said. But he won’t use psychologists to get the team back on a winning streak. Instead, he says, it’s about instilling confidence in the players and, unlike Santana, winning every friendly.

“I want to win every game. I wouldn’t have come if I thought they wouldn’t do well,” he said. “Every one of the players is a celebrity, each living in his own world. We have to work to find people who can win games.”