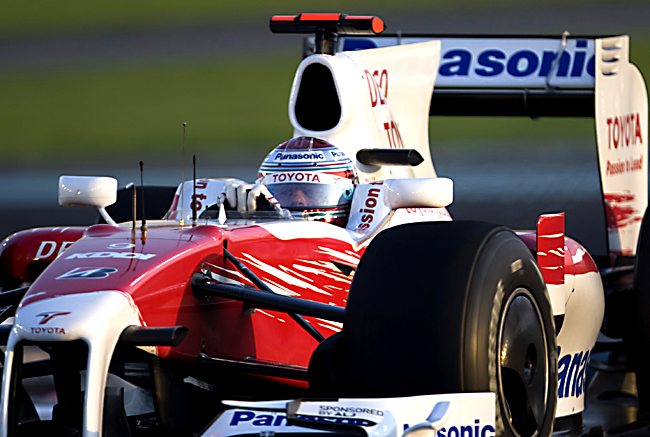 The recession is biting deep enough that manufacturers are abandoning motorsport in droves, opting for more direct forms of marketing. Now the biggest carmaker in the world has left the most glamorous racing competition of them all.

Toyota’s decision to quit Formula One because of the severe global economic downturn will have international racing body FIA chewing at its collective fingernails. Despite Toyota not having won a Grand Prix since its 2002 debut, and finishing a lowly fifth in the 2009 constructors championship, its exit  leaves no Japanese carmaker participating in the world’s number one glamour sport. Days before Toyota left the track, Japanese tyre manufacturer Bridgestone pulled out of F1, fuelling fears over its future. Honda and BMW have also departed.

Akio Toyoda, the grandson of Kiichiro Toyoda, who founded Toyota Motor Corp in 1937, even ruled out supplying engines to other F1 teams, saying the company will make a complete withdrawal from a sport

With many international carmakers on the ropes, sponsoring their brand in the ultra-competitive world of motor racing is obviously becoming a drag. Toyota had got into F1 to boost sales in motorsport-mad Europe, but says the impact on its brand seems to have been smaller than expected.

Motorsport, especially F1, has gone from one crisis to the next in recent years. In 2007, McLaren was stripped of all its constructors’ points and fined $100 million for spying on Ferrari. Earlier this year Ferrari, McLaren, current champion Brawn and five others, threatened to establish a rival series following a row over a “voluntary” $60 million budget cap in 2010. That was meant to cut spiralling development costs, and runaway technology gaps between various manufacturers. The showdown forced long-time FIA chief Max Mosley to step down. In December last year, Honda announced its withdrawal from F1, selling the team to former principal Ross Brawn, whose driver Jenson Button has since been crowned the new F1 champion, with team Brawn claiming pole position in the constructors log. And before it pulled out of F1 altogether, Toyota had already killed off its hosting of the Japanese Grand Prix in 2010.

In 2008, Toyota overtook bankrupt US rival General Motors as the world’s top selling carmaker, but such is the impact of the recession that it lost money for the first time ever in the year to March 2009. Before it quit F1, its Japanese motor manufacturing cousins Suzuki and Subaru had already withdrawn from the World Rally Championship (WRC), with motorcycle maker Kawasaki exiting the MotoGP, and Mitsubishi quitting the Dakar Rally, despite a dozen wins. For The 2009 season, the WRC only has manufacturer teams from Citroen and Ford.

The F1 season has also been challenged by the FIA-backed A1 Grand Prix, where competitors represent a nation rather than a team and themselves. Races are held in the traditional F1 off-season, but along with ever-growing TV and online audiences, the marketers will no doubt continue to expand the number and scale of events. Toyota’s exit fom F1 may be an opportunity for one of the wannabes waiting in the wings.

WATCH: Toyota pulls out of Formula One