Michael Settas is a member of the Free Market Foundation’s Health Policy Unit. He has provided strategic consulting to health funders and managers, and currently runs his own health insurance business.

Where the rubber hits the road, it is clear that in every one of the more than a dozen socialist experiments ever attempted – from Mao’s China to Pol Pot’s Cambodia, to Hoxha’s Albania, Kim Il-sung’s North Korea, Castro’s Cuba and, more recently, Chavez’s Venezuela – financial immiseration and oppressive cruelty are the only certain outcomes of governments committed to socialism.

In a recent article in Daily Maverick, “Health budget slashed despite vaccine commitments” (26 February 2021), authors Daniel McLaren, Mbali Baduza, Sasha Stevenson and Julia Chaskalson from Section 27 rightly lament the slashing of the latest public health budgets, forced upon Treasury under the weight of the precarious prospects the country now faces.

Their concerns about inadequacies in providing access to quality healthcare for the poorest and most vulnerable in our society is without any doubt laudable and they deserve commendation for their continued efforts.

As a cure for these funding problems, they fervently call for the advancement of the National Health Insurance (NHI). The problem, however, with supporting the government’s NHI policy is that it remains, as it has from when the green paper was published in 2011, a red herring.

The NHI will not deliver improved access to quality healthcare services for poor citizens; it is fundamentally a tool to be used to further the failed socialist ideology of the ANC – their euphemistically dubbed National Democratic Revolution (NDR).

As Paul Hoffman from Accountability Now argues in his excellent Daily Maverick article:

“How to kill the goose that lays the golden eggs: Elevating the National Democratic Revolution above the Constitution” (1 March 2021), “the ANC NDR aims to establish an order in which the dominant political party asserts its hegemony; the party and state collapse into one; and a pure socialist revolutionary nirvana emerges in a manner not beneficially established anywhere in the world in any country in which it has been attempted”.

Do not rest your judgement on the validity of the NDR on Hoffman’s comments only – consider this quote below from an article by the ANC’s deputy secretary-general, Jessie Duarte, and provincial secretary of the ANC Youth League in the Western Cape Silas Rataza from November 2019:

“Cubans are suggesting that Africans, and South Africans in particular, must be focused to get rid of the remnants of colonialism and reject imperialist thinking as propagated by institutions such as the World Bank and the International Monetary Fund. If anything, Cubans are entreating us to make sure that the economy is in the hands of the people and that we must push for radical economic transformation that will deliver an inclusive economy.

“Many fear the word ‘revolution’. Yet what the short Cuban experience has certainly taught is that this process, which we call the revolution, is not something static but fluid. The Cuban people are warm, kind, healthy, educated and practice what they teach.

“Yet above all, they are truly free!”

The dizzying rhetoric, the call to place the economy in the hands of the people and the assurance of freedom raise powerful nationalist notions. But, where the rubber hits the road, it is clear that in every one of the more than a dozen socialist experiments ever attempted – from Mao’s China to Pol Pot’s Cambodia, to Hoxha’s Albania, Kim Il-sung’s North Korea, Castro’s Cuba and, more recently, Chavez’s Venezuela – financial immiseration and oppressive cruelty are the only certain outcomes of governments committed to socialism.

Every socialist experiment starts with emotive, lofty notions such as those outlined by Duarte and Rataza. The common opening gambit from those steeped in socialism, and the typified response to criticisms like mine above, are that “this time our social experiment will be different – because real socialism has not yet actually ever been tried”.

But again, these rosy arguments are a red herring. Their purpose is to lull the working class into a mythical notion that uniformity, compliance, the loss of civil and economic liberties and the concentration of unchecked power of the state will bring about prosperity and happiness. All the while, the control of every facet of the economy – and people’s lives – is increased. Nationalisation becomes commonplace, as we see now with land and assets under expropriation without compensation and, equally so, with the NHI which will mete out the same treatment to the private healthcare sector.

Hoffman’s article further elegantly outlines his disagreement with exactly this component of socialism:

“It is difficult to imagine a functioning constitutional democracy in which hegemonic control of all the levers of power in society (society, mark you, not just government) is put in place by the dominant alliance in politics.”

If we are to follow the road of socialism, then it bears considering that the only other developing economy that has built an equivalent system to the NHI proposal is Cuba. And, importantly, the only manner in which they are able to sustain their health system and subsequently their economy, is through the trafficking internationally of their doctors, often with horrendous stipulations and coercions. Human beings are Cuba’s second highest-grossing export next to cigars but, most importantly, the treatment of Cuban doctors amply reflects the hallmark of socialism – the stripping away of basic human rights.

If we want to have better funding for healthcare, and in fact for any other social good, then the experiments like socialism and NHI-style healthcare systems are not the way to go. 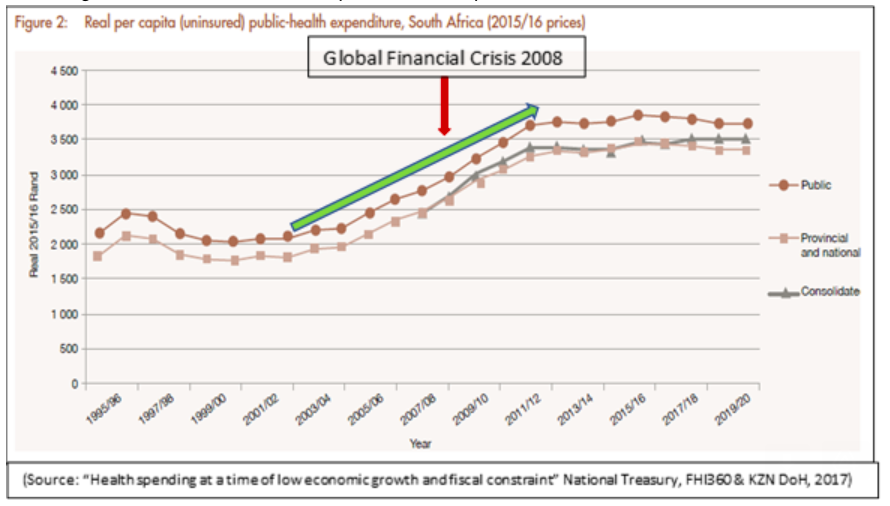 And there is one simple reason this was possible – after the long years of responsible fiscal management under then Finance Minister Trevor Manuel, our national debt had steadily declined to a very healthy level of 26% of GDP. This gave us latitude to absorb the next few ensuing years running at deficits – and most importantly, those people most reliant on social services did not suffer further because of the financial crisis.

At the time, we did not have clear socialist policies such as expropriation without compensation and NHI, we did not have attacks on the judiciary and we certainly did not have the almost daily assaults on the value of our constitutional democracy.

We had a relatively open and free economy, and this enabled the government to improve the lives of South Africans – and for those who could, to create wealth for themselves and not have to rely on the state. It will only be a free and open market economy, along with policy certainty and the removal of structural impediments, that will enable our economy to deliver more essential services to the people.

The National Democratic Revolution is a perfect instance of socialist ideology and will only deliver misery and poverty. DM