Economic freedom will save the planet

Free-market capitalism benefits people in many ways. It makes people more prosperous and happier. What activists won’t tell you, however, is that it also benefits the environment. Those who advocate socialism for the sake of the environment are sorely misguided.

Many journalists and activists routinely blame free-market capitalism for the world’s environmental ills and just as often promote left-wing “solutions” that greatly reduce freedom, increase taxes and extend government control over the economy.

The Green New Deal championed by the US congresswoman Alexandria Ocasio-Cortez, a self-described socialist, is “the best [answer to climate change] humanity has right now”, according to Daily Maverick’s Our Burning Planet series.

The Green New Deal, according to CNN, “isn’t a simple fix for what ails the US. It would equal taking American society back to the drawing board and rebuilding it from the safety net up.”

But it ain’t done, no sirree. It goes far beyond mere “green” ideals. It also demands “guaranteeing a job with a family-sustaining wage, adequate family and medical leave, paid vacations, and retirement security to all people”, “strengthening and enforcing labor, workplace health and safety, anti-discrimination, and wage and hour standards across all employers, industries, and sectors”, “providing and leveraging, in a way that ensures that the public receives appropriate ownership stakes and returns on investment, adequate capital (including through community grants, public banks, and other public financing), technical expertise, supporting policies, and other forms of assistance to communities, organisations, government agencies, and businesses working on the Green New Deal mobilisation”, “providing resources, training, and high-quality education, including higher education, to all people, with a focus on frontline and vulnerable communities, so those communities may be full and equal participants in the Green New Deal mobilisation”, “strengthening and protecting the right of all workers to organise, unionise, and collectively bargain free of coercion, intimidation, and harassment”, “enacting and enforcing trade rules, procurement standards, and border adjustments with strong labour and environmental protections”, and “providing all people with high-quality health care; affordable, safe, and adequate housing; economic security; and access to clean water, clean air, healthy and affordable food, and nature”.

Whew. We want all the things, we want them now, and we want them for free! The public must own everything, and the government must run everything. It’s an extreme socialist manifesto of considerable audacity.

Others wrote about the “ecocidal logic of capitalism”, from which we need a “systemic exit”, which “includes the ‘common-ing’ of life-giving resources”. That is, he thinks we need to overthrow capitalism and establish socialism.

Globally, activist Naomi Klein thinks the Green New Deal offers a “game-changing promise”. She has argued that climate solutions will “require shredding the free-market ideology that has dominated the global economy for more than three decades”, in favour of central planning, complete with “reining in corporations”, “taxing the rich and filthy”, “ending the cult of shopping”, “relocalising production”, and “reviving and reinventing the public sphere”. She, too, thinks we should ditch capitalism in favour of socialism.

Numerous other writers believe that free-market capitalism and environmental degradation are two sides of the same coin and that the environment can only be saved by larger governments with more power and stricter regulations.

There are easy ways to test if they’re right, however. First, we can examine what the environment looks like under powerful central-planning governments. Let history be a guide. Second, we can examine real-world data, to see if environmental degradation and economic freedom really are correlated.

“Across Eastern Europe, a crisis of the environment is eroding the natural and cultural heritage, confronting Communist governments with major pollution problems at a time when economic difficulties are diminishing the financial resources to deal with them,” the New York Times reported in 1987, before the fall of the Soviet Union.

The story is filled with horror stories about water, soil and plant contamination, rivers clogged by industrial waste and sewerage, and sulfur pollution in the atmosphere causing damage to buildings.

“Pollution is widespread in many Western nations as well, but experts consider the crisis more severe and further along in Eastern Europe,” the newspaper said.

And the legacy lives on. In a 2016 paper, William A Suk of the Central and Eastern European Conference on Health and the Environment wrote: “Environmental pollution is widespread, resulting from the consequences of rapid industrialisation during the Soviet Union era… with no industrial, occupational, or environmental controls put into place.”

In South Africa, Eskom is a state-owned enterprise. Yet it is also the largest polluter, by far, in the country. Do the would-be socialists really want to entrust this self-same government with more power and more control over the economy, in the hope that it will somehow curb environmental destruction?

The truth is that socialist-leaning governments have a far worse environmental record than big corporations in free-market societies. But don’t take my word for it. Let’s go to the data.

The Environmental Performance Index (EPI) ranks 180 countries on 24 performance indicators across 10 issue categories covering environmental health and ecosystem vitality, on a scale of 0 (worst) to 100 (best). These include measures of air pollution, water resources, exposure to heavy metals, biodiversity and habitat, forests, fisheries, climate and energy, and agricultural pollution.

According to the authors: “These metrics provide a gauge on a national scale of how close countries are to meeting established environmental policy goals. The EPI thus offers a scorecard that highlights leaders and laggards in environmental performance, gives insight on best practices, and provides guidance for countries that aspire to be leaders in sustainability.”

A simple map is already suggestive of who does and doesn’t do well on protecting the environment: 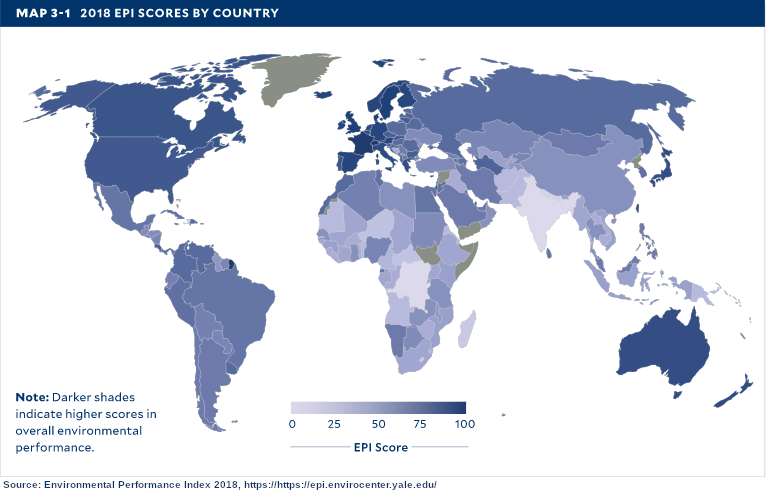 Then I looked up per-capita GDP and created a scatter-plot with a trend line. And would you believe it, richer countries perform better on environmental criteria than poorer countries: 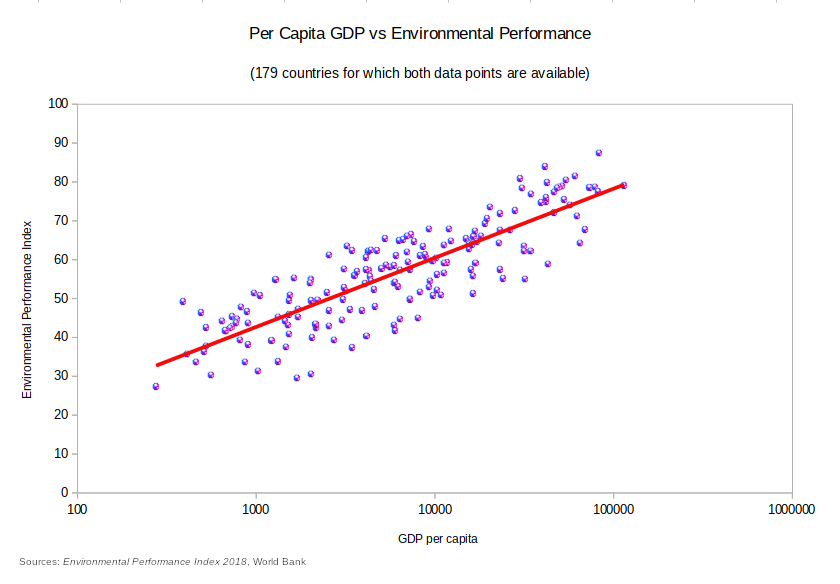 In the Fraser Institute’s Economic Freedom of the World: 2019 Annual Report, the authors rank countries based on a range of measures of economic freedom. These criteria are grouped into five categories: size of government, legal system and property rights, sound money and low inflation, freedom to trade internationally, and regulation. The higher the ranking (out of a possible 10), the freer an economy is.

Here’s the map representation. Note the superficial similarities between this map and the EPI map above: 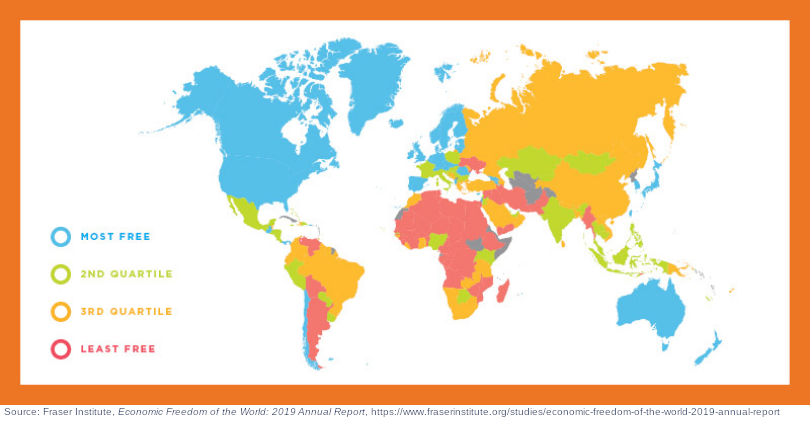 Right at the outset, the report points out that greater economic freedom is associated with better performance in various indicators of well-being. In free countries, average per-capita GDP is higher, the average income of the poorest 10% is higher, far fewer people experience extreme poverty, infant mortality is lower, life expectancy is higher, citizens enjoy greater political and civil liberties, gender equality is better, and happiness levels are higher.

But what about environmental performance? Is the superficial similarity between the two maps real? To answer that, I drew up another scatter-plot, complete with trend line. 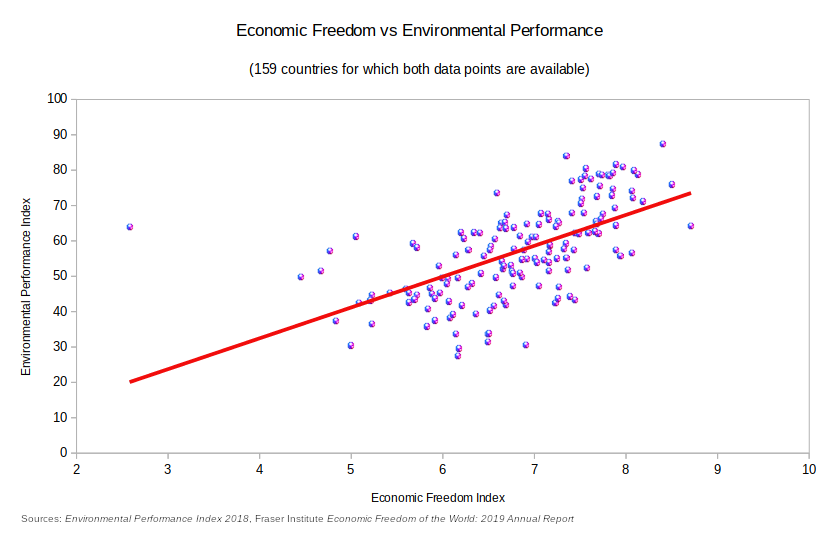 Clearly, there is a strong correlation between government policies that establish economic freedom (and hence cultivate free-market capitalism), and environmental performance. Conversely, as governments get bigger, property rights get weaker, inflation gets higher, free trade is curtailed, and regulations get stricter – which is what the advocates of “Green New Deals” desire – so environmental performance gets worse.

But free-market capitalist economies “externalise” their “carbon pollution”, argue some. But do they?

Since my scatter-plot skills are now clearly undeniable, let’s test that theory too. It would be tempting to simply plot total CO2 emissions by country against economic freedom, but that would be deceptive since this measure would be dominated by population size and economic prosperity.

Instead, I calculated countries’ carbon intensity, which is a measure of CO2 emissions per dollar of GDP produced. The higher the carbon intensity, the more CO2 a country emits for the same level of production.

I plotted this against the Economic Freedom Index. 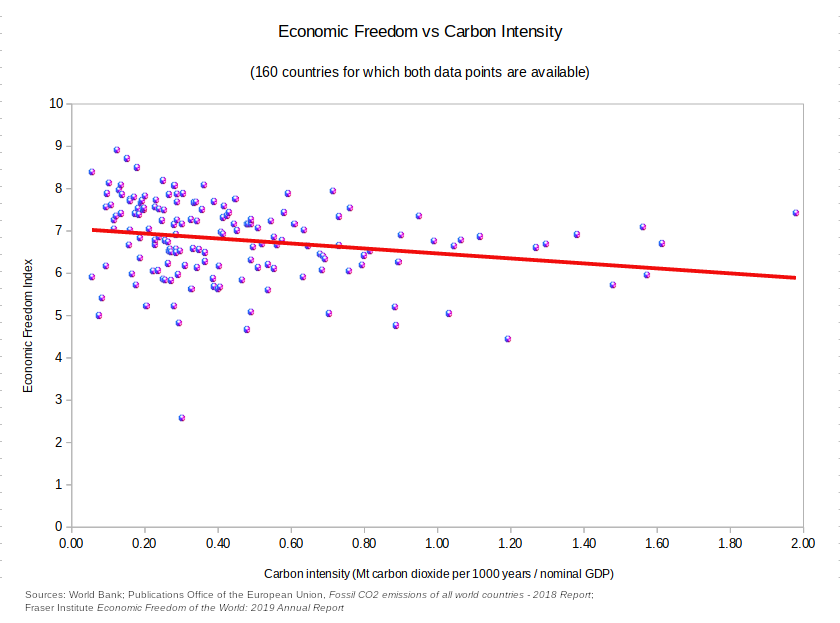 Again, there is a trend that shows freer economies tend to emit less CO2.

Greta Thunberg is a privileged 16-year-old from a very rich country, stamping her feet at the adults, just as all generations of teenagers have done before her. I did it. You did it. The punks did it. The hippies did it. We all did it, and then we grew up.

She is also the new face of environmentalism. This is a great strategy because if you challenge her, you’re automatically denounced as a bully, a sexist, or some other brand of bigot.

Thunberg told the United Nations: “We are in the beginning of a mass extinction and all you can talk about is money and fairytales of eternal economic growth.”

Well, sure, Greta. That’s because one day when you’re old enough to master scatter-plots, you too will discover that higher per-capita GDP and greater economic freedom actually improve environmental outcomes.

If you want to solve the world’s environmental problems, first focus on helping poor countries to become rich, by reducing their size of government, lowering barriers to trade, protecting property rights, printing less money, and cutting back on overly onerous regulations.

Turning to socialism, central planning, or idealistic Green New Deals would not only be the wrong policy, but it will make things worse. DM