Education: In SA, Children’s rights die one PowerPoint at a time

When the history of the cruel early years of the 21st Century comes to be written, it will be found that South Africans, especially our politicians and policy-makers, were a nation of ditherers. We dithered as Rome burned. We held conference after conference about the plight of the poor, in fact we made an industry out of it, instead of having conversations with the poor and getting our hands dirty in trenches of social injustice.

One area where our dithering outdid itself will be said to be what we didn’t do about the crisis facing every child in South Africa: every child’s rights to a basic education and equality seems to have fallen to the bottom of our state’s list of priorities.

In fact, so low have we fallen that we now beg the private sector to build school toilets.

It’s not that we don’t know there’s a crisis. On 16 June 2018 at the Kgalema Motlanthe Foundation’s inaugural conference on “inclusive growth” three of the plenary speakers appealed passionately for concerted action on basic education. One-time deputy finance minister Mcebisi Jonas called for “a new national obsession with fixing our broken education and skills pipeline”.

“Suicide” was the term he used to describe what we are doing to “our kids in schools and townships”.

Pali Lehohla, the former Statistician-General, echoed him. He used slide after slide of statistics to show how inequality in education was widening inequality between the races and impacting negatively on employment prospects, income and many other things beside.

Shaeera Kalla, one of the inspirational leaders of the first wave of the #FeesMustFall movement, tried to rally the older audience, imploring that “when almost four out of five 10-year-olds can’t read to understand, it should inspire all of us to act”.

Kalla was referring to the results of the 2016 Progress in International Reading Study (PIRLS) which revealed that by Grade 4 (age nine or 10) 78% of South African children cannot read for meaning. We were bottom of a class of 50 countries.

That the education system fails our children is not surprising. The government is now on its way to the Constitutional Court to argue that it cannot afford to provide children with even minimal requirements for their education: safe and dignified toilets, desks and school libraries. “Nothing shows the entire collapse of our social pact than the story of Michael Komape” says Kalla.

In another part of the country on that same 16 June Day that the Motlanthe Foundation gathered in shadow of Champagne Castle, there was a meeting in Soweto of Literacy in our Lifetime, a group of concerned citizens who hoped to catalyse a new alliance on reading. Among them was Nic Spaull, an academic voice going hoarse trying to draw attention to the most frightening implications of the education crisis.

Spaull points out that if the majority of students fail in their foundation phase efforts to “learn to read” they are never able to “read to learn”. They need a basic ability to read in order to understand all their other subjects – if they cannot read, they will not grasp concepts in life sciences, history, geography, computer literacy or business sciences. Thus, by Grade 4, that is the tender age of nine, the die is cast for most of our children – eight of every 10 in this country.

The table below, one of many in Spaull’s armoury, graphically depicts this. 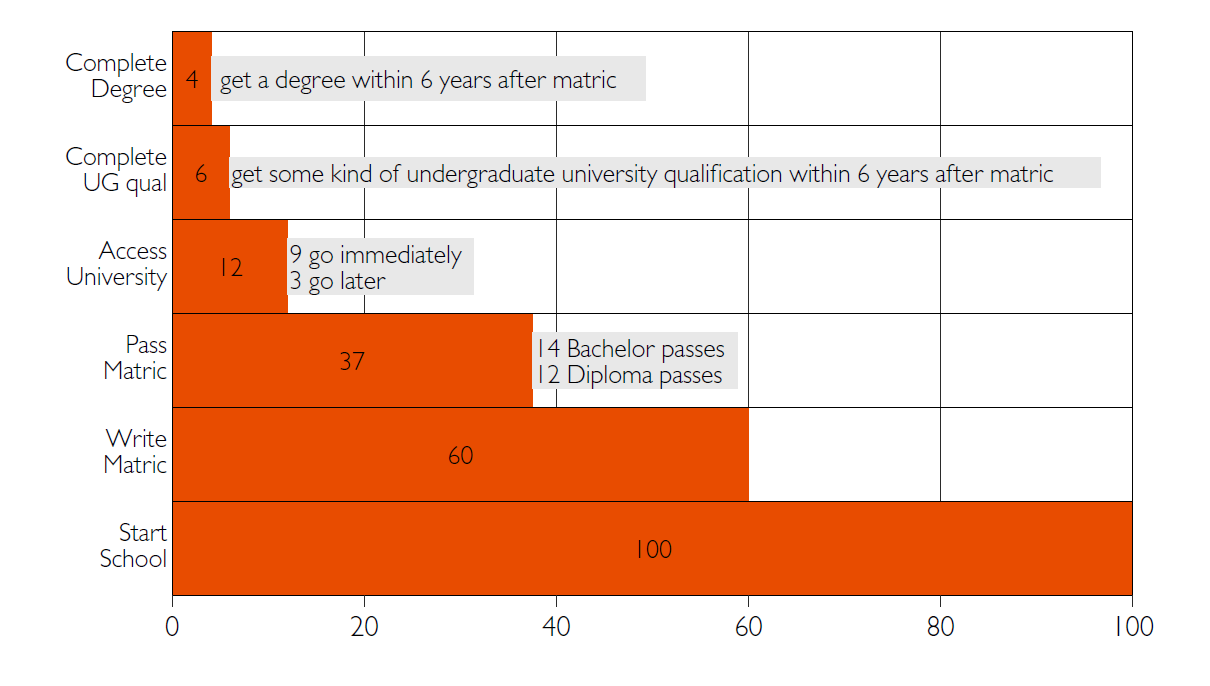 When we break this table down further, not surprisingly we find that white and well-off children do far better than their black counterparts: only eight out of every 100 black children complete a university degree compared to 22 of their white male peers and 33 of their white female peers.

Pause for a minute and suck the meaning of that up.

To address this crisis the Research on Socio-Economic Policy (RSEP) unit at the University of Stellenbosch (of which Spaull is a part) has called for a “radical prioritisation … on developing the skill of reading in primary school” and identified four “binding constraints” that must be overcome to do this.

Their report also carries the imprimatur of the Department of Planning, Monitoring and Evaluation. But that matters little when our state has lost the capability and will to act on evidence; and when the comfortable classes prefer conferencing to acting. There’s no sense of urgency. So nothing, yet, has come from these appeals. Consequently, despite much hand-wringing and sugar-coated promises, the education crisis deepens.

Children’s rights die one PowerPoint at a time. So do their futures.

In this context, one can’t but think that appeals that are premised on adults being willing to act in the best interests and rights of the child are falling on deaf ears. So, let me try a more utilitarian argument.

Generations of children were denied a quality education by apartheid. But 25 years after its end, the legacy of “bantu education” still bedevils our state. Many of the over 1.3-million people now employed as public servants were educated in the 1980s and early 1990s, the time of “bantu education” and its rejection by the disruption of schooling.

Running a modern state is a complex business. It requires a high degree of skill at every level, be it in the police, clinics, or the bureaucracies that sit in buildings in Tshwane and are meant to oversee everything from municipal government to state-owned enterprises. The problem is that because of apartheid education there is a dire shortage of public servants with the skills to manage that complexity. Hence our dysfunctional state, hence our inability to protect the public purse from corruption and capture.

One result is that we farm a lot of the business of the state out to private consultants. Their motive is solely to profit. Despite their exorbitant cost they seem to bring little improvement to service delivery. They also bring with them an even higher risk of corruption, as we have now seen with McKinsey KPMG and many other consultancies yet to be directly fingered.

Post-apartheid basic education should have equipped the born-frees with the skills needed by modern economies and states. Perhaps that was one reason why as a constitutional right, basic education is meant to be immediately realizable, unlike health or housing. But today although equal in law, children are discriminated on the basis of their class and geographic location. So, tragically, for the generations to come, basic education is doing little better than apartheid to equip a capable state.

The bottom line is that unless we urgently fix literacy and basic education we will never have a capable state.

Without a capable state we will have more corruption, less democracy and more inequality.

Without a capable state we will have more dependence on McKinseys and KPMGs, more privatisation at huge cost to our resources and accountability.

But fixing education needs more than money, statements and endorsements. It needs a vision, political will and a sense of urgency. It needs collaboration and belief in a dream. In the words of Shaeera Kalla:

“When the state, private sector and civil society join together the ability to dream and to dream big is tempting. Why can’t .. we have an agreement that we will develop an intervention to solve this reading crisis. An Idea: the public sector must admit to its failings but also be willing to provide access to the learners and schools. The private sector must give its best programmers, market experts, gamification designers and capabilities to design an innovative, engaging tool tailored to the individual learners reading skills with a roadmap towards full comprehension. Civil society, education experts and teachers must act as the catalyst to co-ordinate the public and private sectors. Just an idea…”

So we should heed Jonas, Lehohla, Kalla and Spaull. More importantly we should heed the millions of kids we are failing. This is one issue on which our society ought to be able to find common purpose.