All Blacks angst doesn’t make them any less of a thre... 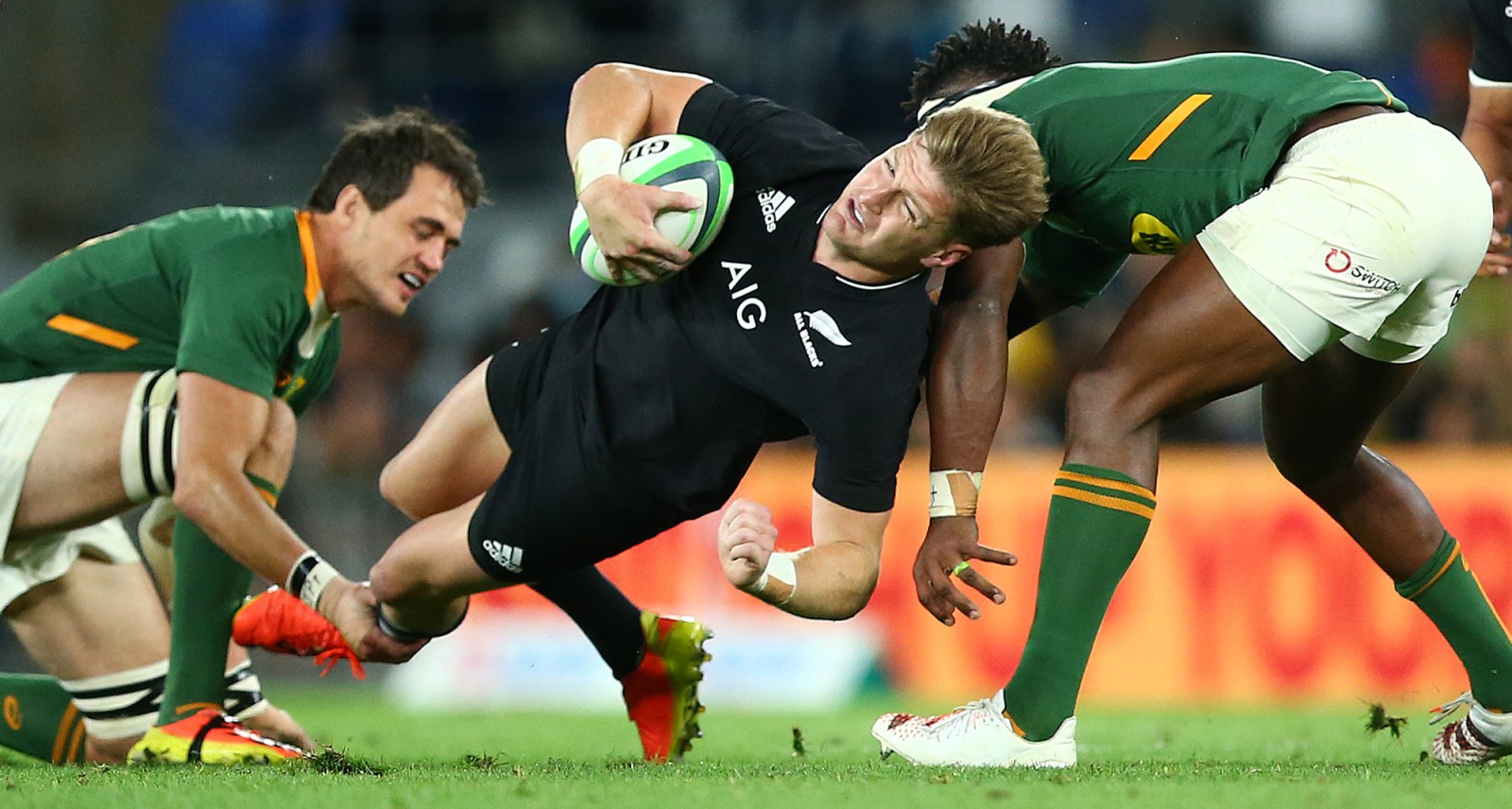 Jordie Barrett of the All Blacks is tackled during The Rugby Championship match against the Springboks at Cbus Super Stadium on 2 October 2021 in Gold Coast, Australia. (Photo: Jono Searle / Getty Images)

Regardless of the All Blacks’ recent form and shortcomings, they will still pose a major threat to the Springboks over the coming fortnight.

It feels as if everyone has climbed into the All Blacks team after their July home series loss to Ireland, which came so soon after two defeats on their European tour in November 2021. Four losses for the All Blacks out of seven Tests in eight months — it’s sent New Zealand into a near state of meltdown.

These are stressful times for a rugby team whose results, especially in the professional era, have almost always oscillated between excellent and magnificent. The All Blacks aren’t supposed to have poor teams. They barely have a poor half of rugby.

The class of 2022, by the way, is not a poor team. Neither is it an excellent one. It hovers around the merely good mark. It probably has the potential to go from good to excellent, which is why the Springboks — who meet their arch-enemy in Nelspruit on Saturday — have to be the very best version of themselves.

After all the angst, the All Blacks could not have asked for a better opponent to regain their reputation of invincibility. If playing against the world champions on their own patch doesn’t bring out the best in the All Blacks, nothing will.

As South Africans looking on, it’s equally bemusing and amusing to watch the All Blacks in such a frayed state. Not so long ago, South Africans were — with much better reason than New Zealanders — wondering if the Boks should just stop playing rugby.

The 57-0 loss to the All Blacks in Albany in 2017 was the low point of a period of Mariana Trench depths of misery. But things change quickly. Just ask any South African.

All Blacks coach Ian Foster is standing on the edge of a cliff with an angry mob behind him. If his team lose to the Boks, he will be pushed over the edge and into ignominy. If his team redeems itself and topples the world champions, Foster gets to take a few steps back from the brink. But it still might not be enough.

It genuinely feels that Foster’s tenure is numbered in days rather than months. The level of national angst over the 2-1 series loss to Ireland has bordered on insane. New Zealand Rugby (NZR), the organisation that employs Foster, has hardly been supportive.

Foster’s two main assistants. Brad Mooar (attack) and John Plumtree (forwards) were axed before the South Africa tour. Foster survived the cull, but it only succeeded in weakening him in the eyes of the world and probably his own team.

How can the players be sure the coach has their back when he stood by and let two of his assistants, whom he brought into the set-up in 2020, take the fall, and then have two new coaches — Jason Ryan and Joe Schmidt — foisted on him? It’s not a good look.

NZR’s chief executive Mark Robinson’s almost comical silence for more than a week after the third Test against Ireland was instructive. There was no show of public support for the coach — only emasculation. And even when Robinson did finally front up, he did not back Foster beyond the South African tour.

Everyone, from former coaches Steve Hansen and Graham Henry to former players and current pundits, has piled in on NZR or Foster.

Crusaders coach Scott Robertson, seemingly everyone’s favourite candidate to save All Blacks rugby, subtly added to the pressure by saying he’d like to lead another side, other than the All Blacks, to World Cup success. He said he was “open” to offers. It was a clear message to the NZR that he is not prepared to wait around forever for the All Blacks job.

Having led the Crusaders to six Super Rugby titles — three in the old format and three in its Covid-affected incarnations — his position might appear understandable.

But Robertson’s veiled threat came from a place of frustration and at a time when the All Blacks are at a low ebb. Obviously he was musing aloud: what more does he have to do to get the top job in New Zealand? But publicly kicking Foster while he’s down demonstrates a certain lack of EQ.

Another factor in this great All Blacks bout of hand-wringing is that the players — you know, the guys who actually play — have emerged from the fallout almost unscathed.

It’s as if the 23 members of the team that lost two home Tests to Ireland were somehow innocent bystanders in this All Blacks version of a rugby car crash.

Read in Daily Maverick: “Is the lack of exposure to South Africa’s physicality behind the All Blacks’ slump?”

All the knock-ons, botched lineouts and missed tackles can be dumped on the coaches only to an extent. At some point, highly paid athletes from the consistently best rugby nation on earth have to take responsibility.

So as the All Blacks hunker down in White River to prepare for Saturday’s Rugby Championship opener against the world champion Springboks at the Mbombela Stadium, there is a lot going on — and very little of it is good.

Winning one Test against the Boks might not be enough to save Foster’s job. It’s clear the New Zealand public has had enough of the Foster era. His side has lost seven of the 24 Tests he has presided over — a win rate of 67%.

The All Blacks, even with Foster’s below-standard return, have won 81% of their Tests in the professional era. By that yardstick, Foster’s All Blacks are failing badly.

Although the players are also culpable, Foster is the one who picks them. After the Ireland series, he made minimal changes to the touring squad. While Foster wouldn’t or couldn’t stand up for the axed Plumtree and Mooar, he certainly stood up for the players. Now it’s payback time.

Which, oddly, is what makes the All Blacks dangerous. The All Blacks have only ever lost four Tests in succession three times in more than 100 years of Test rugby. And not since 1998.

Everything is on the line over the next two weeks. Foster might be axed in due course, but these All Blacks still have long careers ahead of them. They are not only playing to beat the Boks this week and next. They are also auditioning for their futures in the black jersey, regardless of who coaches the team.

In short, there are many desperate and highly motivated men in that setup. As the cliché goes, you’re only as good as your last performance. The converse is also true. The Boks have been warned. DM