Burgeoning Boks still face a threat by declining All Bl... 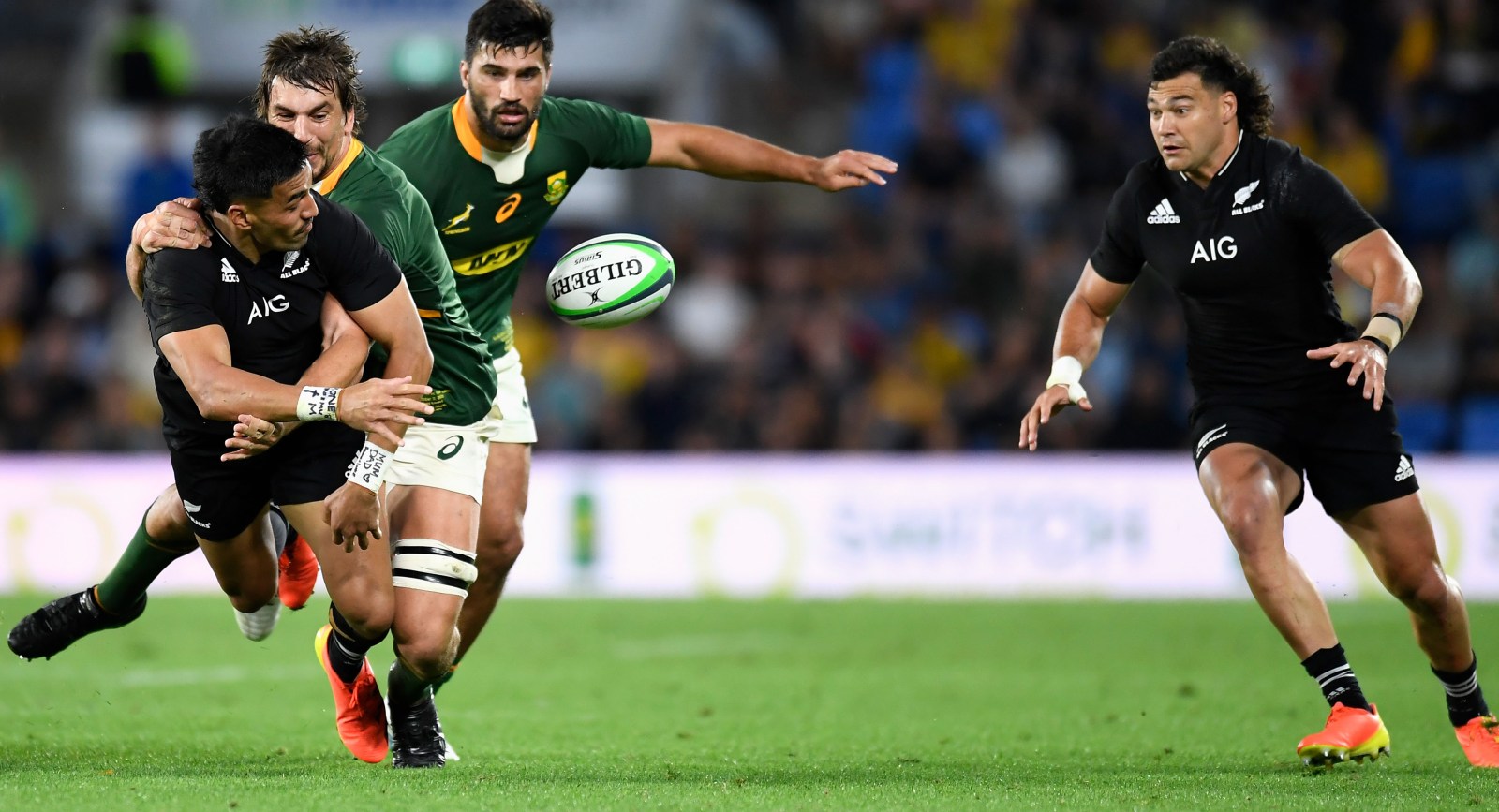 Rieko Ioane of the All Blacks is tackled during The Rugby Championship match between the South Africa Springboks and New Zealand All Blacks at Cbus Super Stadium on October 02 2021 in Gold Coast, Australia. (Photo by Albert Perez/Getty Images)

The Springboks have some way to go in emulating the All Blacks – and it would be foolish to treat two wins in the coming series as a done deal.

Rassie Erasmus recently shared a video on social media that summed up the Springboks’ respect and admiration for the All Blacks. The clip shows Erasmus accepting the 2019 World Rugby Coach of the Year award shortly after guiding the Boks to the World Cup title in Japan.

Erasmus tells the MC that the World Cup title is only the beginning, and that the Springboks are on a quest to emulate the All Blacks and build a dynasty. The camera pans to All Blacks coach Steve Hansen in the audience, who is listening  with interest.

Between 2010 and 2018, the All Blacks won 108 out of 122 Tests, seven Rugby Championship titles as well as back-to-back World Cups. It’s not hard to understand why many have hailed that group as one of the greatest in all of sport.

In addition to sharing the clip, Erasmus provided a message that speaks to the mindset of the Boks ahead of the coming Tests against the All Blacks in South Africa.

New Zealand may be reeling after losing four of their last five matches, and some critics have predicted that the Boks will win the Tests in Nelspruit and Johannesburg at a canter. Erasmus, however, has insisted that the Boks have a healthy respect for New Zealand rugby and the standards that they set.

Any success in the coming weeks will be hard-earned.

Assessing the All Blacks

The All Blacks’ present decline needs to be viewed in perspective.

Hansen boasted an 86% win record during his eight-year tenure as head coach. Ian Foster was expected to maintain that momentum and to add to the legacy when he took the reins in 2020.

The All Blacks, however, have stalled in the ensuing years, and have won 67% of their matches. More on this win-rate and what it means in a broader context later.

Foster’s tenure includes a first-ever loss to Argentina, as well as defeats to Australia, South Africa, France and Ireland (thrice). Losses in Nelspruit and Johannesburg this August could stretch the All Blacks’ rotten run to four defeats – their worst losing streak since 1998.

The New Zealand Rugby Union has described the All Blacks’ results as “unacceptable”, which they certainly are, at least by New Zealand rugby’s lofty standards.

How New Zealand built an empire

Back in 2009, the All Blacks lost three consecutive games to the Boks, and surrendered the Tri-Nations and Freedom Cup titles.

Coach Graham Henry still managed to guide the team to a 71% win record that season – though the hat-trick of defeats to the Springboks led to an overhaul across the structures of New Zealand rugby.

The brains trust noted how the Boks were controlling big Test matches via their line-out, defence and kicking game and endeavoured to bolster those departments at national and franchise level.

A year later, the All Blacks got their revenge, claiming three consecutive wins against the Springboks – and ultimately a six-from-six return in the 2010 Tri-Nations.

Hansen succeeded Henry after the All Blacks’ triumph at the 2011 World Cup. In the next four-year cycle, the team powered their way to 49 wins in 54 Tests.

Some of the All Blacks’ stats have been inflated over the years due to games against weak opposition – as was the case in 2021 when they thrashed Tonga, Fiji and the US.

But, in 2016, Hansen’s team took their game to the next level, racking up phenomenal numbers when competing exclusively against tier-one nations.

Thereafter, the All Blacks began to gradually decline.

Chink in the armour

The year 2017 was a watershed season. The Lions delivered a blow for the rest of the rugby world when they became the first side to win a Test in New Zealand in eight years.

Most Test teams would kill for a return of 11 wins, one draw and two losses. The high-flying All Blacks, however, had no cause to celebrate a 79% win record. For the first time since 2011, they finished a season with two defeats.

In 2018, the Boks and Ireland exploited the chink in the All Blacks’ armour.

After turning things around at SA Rugby and guiding the Springboks to a morale-­boosting win against England, Erasmus masterminded a landmark victory against the All Blacks in Wellington.

That result proved the Springboks were headed in the right direction, while simultaneously highlighting several flaws in the All Blacks’ approach.

Ireland followed up a Six Nations Grand Slam title with a series win in Australia. After Ireland beat the All Blacks in Dublin later that year, Hansen declared that the Irish – rather than the top-ranked All Blacks – were the leading team in world rugby.

The All Blacks lost to England in the 2019 World Cup semifinal to relinquish their hold on the Webb Ellis Cup – and the No 1 ranking. The team’s decline accelerated under Foster, who struggled to prevent a series of losses to tier-one opposition.

Boks at the crossroads

Much of the criticism of the All Blacks is warranted. As was the case in 2009, New Zealand rugby is in dire need of a shake-up.

That statement, of course, is made with New Zealand’s high standards in mind. A win record of 71% in 2009 prompted a structural overhaul. A return of 67% between 2020 and 2022 may lead to similar changes.

But how does Foster measure up to other Test coaches? The answer says a lot about the standards of New Zealand and those of other rugby nations.

Historically speaking, the Springboks are a team that wins 63% of its matches. Erasmus may have delivered the Rugby Championship and World Cup to South Africa, but only managed a 65% win record across the 2018 and 2019 seasons.

Jacques Nienaber has been in charge for 16 games. Although he deserves recognition for his contribution to a Lions series victory that will echo into eternity, his overall win record is hovering at 63%.

The All Blacks are in decline, and it’s not hard to understand why Foster is under so much pressure from a demanding New Zealand public.

At the same time, it’s important to remember – as Erasmus suggested via his video and tweet – why teams like the Springboks have some way to go in emulating the All Blacks, and why it would be foolish to treat two wins in the coming series as a fait accompli. DM