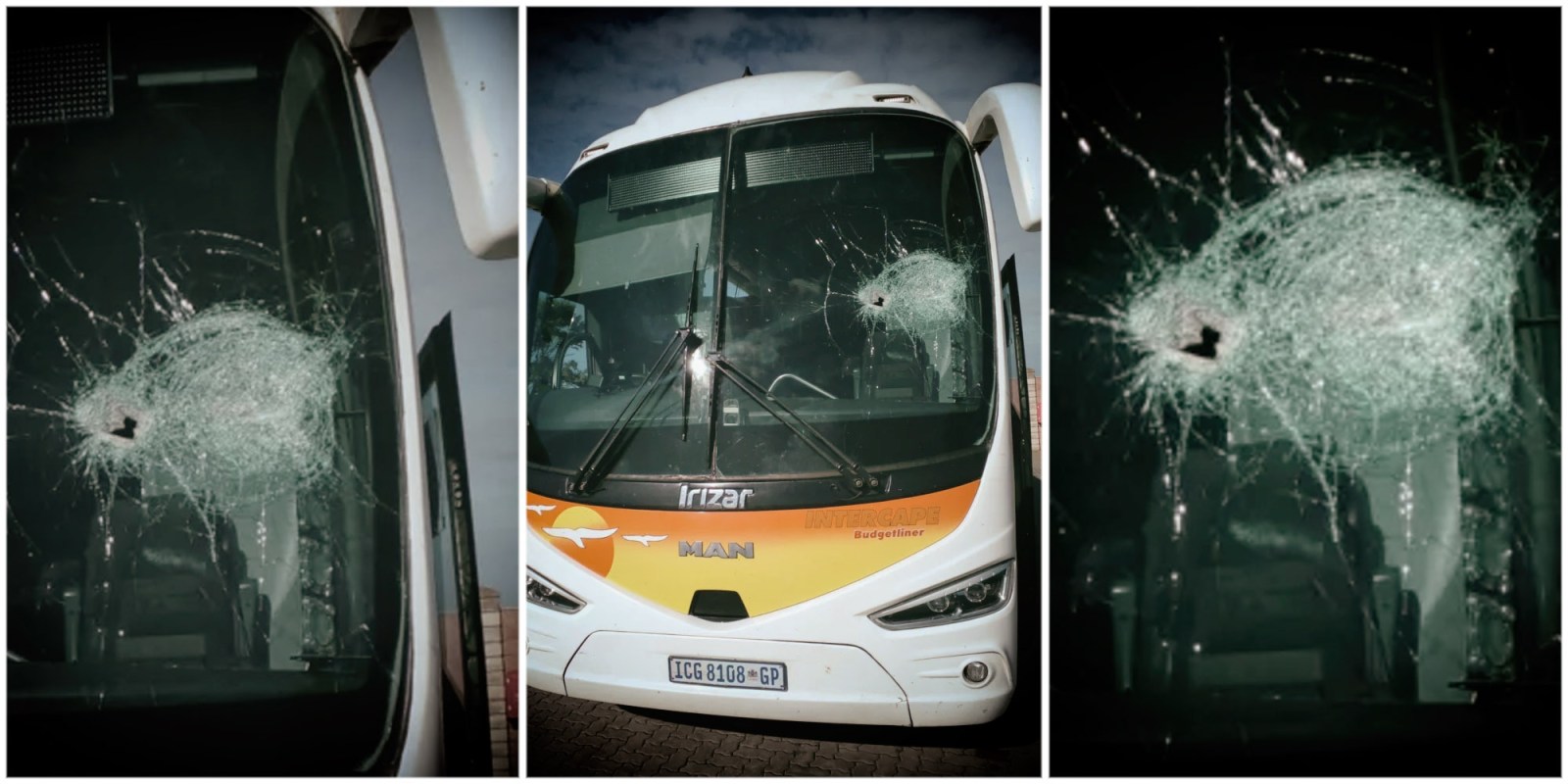 Bus operators allege that minibus taxi associations are behind the violence that has escalated in recent months. These images depict the results of incidents in the Eastern Cape and Cape Town. (Photo: Supplied)

Intercape long-distance bus operators are a vital component of the country’s transport system. The company says relentless attacks on its drivers threaten its continued services and endanger passengers too.

The concerns raised by Intercape follow the latest attack on one of its bus drivers who the company says was shot and wounded outside its depot in Airport Industria in Cape Town on Sunday, 31 July.

It says the driver was rushed to hospital for emergency surgery and is in a stable condition.

This attack came three months after driver Bangikhaya Machana was shot in the left arm and waist at an Intercape depot in Cape Town on 25 April. The 35-year-old father of two young children died from his injuries three days later.

After Machana’s death, the long-distance coach industry called on President Cyril Ramaphosa and Transport Minister Fikile Mbalula to respond to the attacks. Intercape CEO Johann Ferreira said the murder of long-distance bus drivers is part of a “campaign of violence” against the industry.

Between January 2021 and February 2022, more than 150 shootings, stonings and other acts of violence and intimidation directed at bus drivers and passengers were reported to the South African Police Service (SAPS) in the Eastern Cape, the Western Cape and Gauteng. Bus operators say police inaction has led to further bloodshed.

Western Cape mobility MEC Daylin Mitchell has condemned the latest attack on Intercape and the attempted murder of its driver.

“When I first heard about the reported spike in attacks on buses on routes between the Western Cape, Eastern Cape and Gauteng, I [took] steps to ensure the matter has been brought to the attention of relevant authorities in the security and enforcement environment for the urgent coordination of investigations and interventions,” he said.

Following a meeting with various role-players in May, Premier Alan Winde wrote to Ramaphosa to request an urgent meeting and coordinated intervention at national level to combat extortion and racketeering in the public transport sector.

However, the matter was referred to the security cluster ministers and according to Mitchell they still await action on the part of the police minister, who was tasked with convening crucial and urgent engagement.

Mitchell will also raise the matter with the transport minister and provincial counterparts in a Ministers and Members of Executive Councils (MinMEC) meeting to address the perception among bus operators that politicians and enforcement officials are failing in their duty by allowing criminal extortionists to hold both the bus and minibus taxi industries hostage to their demands for price fixing by flooding routes with illegal operators while preventing legal operators from operating in certain areas.

Mitchell has also repeated his instruction to provincial traffic officials to monitor long-distance bus operators and, with the support of the SAPS, to be on the lookout for any “patrol vehicles” that illegally stop and extort buses and other private vehicles along key routes between the Western Cape and neighbouring provinces.

“The Western Cape government will not condone criminal acts of extortion, will not negotiate with nor try to appease criminals and will not allow the rule of law to be compromised.

“Our first priority will always be to ensure the safety of communities, and we will support every effort to root out the small criminal element that seeks to hijack the public transport industry for their own criminal agenda.”

‘Not a single arrest’

Meanwhile, Intercape’s Ferreira said that in mere months there have been more than 150 recorded violent incidents, several of which have led to serious injuries to employees and passengers of long-distance bus operators.

“Despite 124 cases opened with police, especially in the Eastern Cape, there has still not been a single arrest made linked to this campaign of violence, which we find completely unacceptable,” he said.

No arrests had been made at this stage and the investigations were continuing.

By the time of publication, Cele’s spokesperson, Lirandzu Themba, had not replied to Daily Maverick’s inquiry. DM