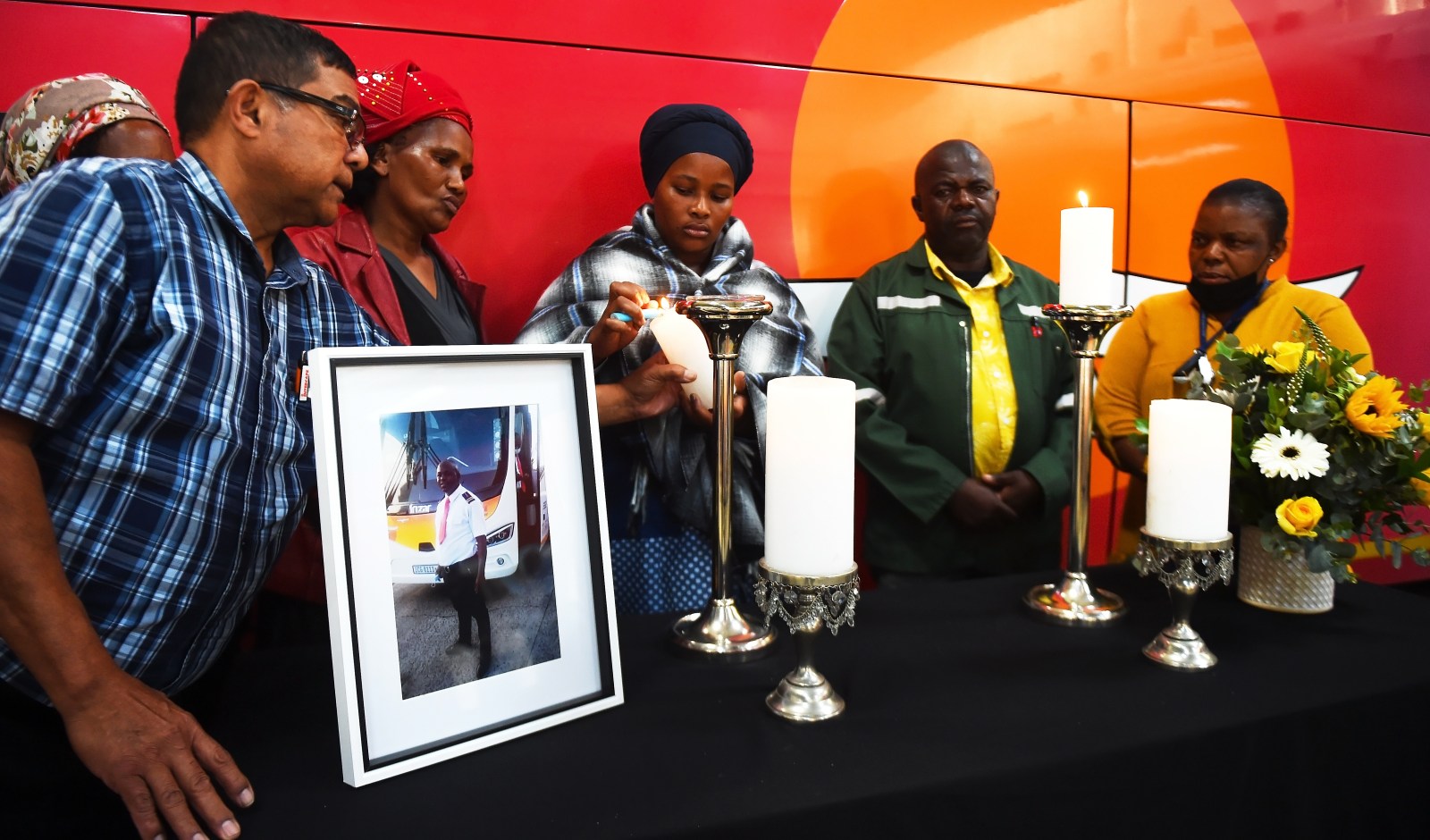 Asange Mchana (centre), the widow of murdered long-distance bus driver Bangikhaya Machana, lights a candle during memorial service at the Intercape Depot in Cape Town. Standing next to her on the right is Machana’s father, Nkululo Mchana. Mchana died after being shot outside his workplace. (Photo: Xabiso Mkhabela)

Long-distance bus driver Bangikhaya Machana will be laid to rest on Saturday after being shot at a depot. While his colleagues and loved ones mourn their loss, his employer, Intercape, has appealed for government intervention and raised the alarm about the rising danger of extortion and violence in the long-distance bus industry.

Bangikhaya Machana had finished his shift as a long-distance bus driver when he was shot in the left arm and waist at an Intercape depot in Cape Town on Monday, 25 April. The 35-year-old father of two young children died of his injuries three days later.

He had been employed by Intercape for 10 months.

During a memorial inside a warehouse at the depot in the Boquinar Industrial Area on Tuesday, attendees sang gospel hymns in isiXhosa and colleagues read poems and Bible scriptures.

“He’s my firstborn child and he was a good child… he took care of us and he treated his sisters well. Nobody has ever complained about his behaviour. His death is a great loss to our family,” said Machana’s father, Nkululo.

“We’re here to set him free because it’s God’s will and there’s nothing we can do about that,” Nkululo told Daily Maverick after the service of the eldest of his seven children.

Machana’s colleague Mfundisi Headman described Machana as a hard worker with a good sense of humour.

Four white candles and a framed picture of Machana standing outside a bus were on display on a table with a black cloth. Nkululo and Machana’s wife Asange lit two candles before the service. Three women comforted her afterwards as she wept.

Machana, who is from Dutywa, in the Eastern Cape, had started driving buses in that province three years ago before he moved to Cape Town last year.

Machana, who will be buried in his home town on Saturday, 7 May, leaves behind his wife and two children, aged six and four.

‘Trying to force us out of business’

His death took place against the backdrop of other attacks on long-distance bus companies.

“I draw my strength from [my staff’s] courage. We’ve been through a lot, including industry strikes, not necessarily from our employees though. We’ve also been through this before, with our buses being shot at and stoned,” said Ferreira.

“[The attacks] are uncalled for. We didn’t do anything wrong, but some people are not happy and now they’re trying to force us out of business.”

Machana’s attack is the latest in a string of incidents against bus drivers and passengers in the long-distance bus industry. A statement issued by Ferreira and Intercape said there was a “campaign of violence” against the industry that included incidents of rock throwing, arson attacks and shootings.

Besides the shooting of Machana, the company listed three other violent incidents against coaches and their drivers over two days last week.

Ferreira said extortion and violence were levelled not only at Intercape, but the broader long-distance bus industry. He said more than 150 violent incidents had been reported over the past year, with more than 60 cases opened at police stations. No arrests have been made.

“These gunmen and the murderers of our employee in Cape Town are out there walking freely and brazenly and think nothing of shooting at innocent people,” Ferreira said.

Intercape made a public appeal for intervention from President Cyril Ramaphosa. Ferreira called the attacks a “campaign” aimed at forcing long-distance coach companies out of business.

He said the attacks were mainly centred on key towns and routes in the Eastern Cape, but there had also been attacks in the Cape metropole and Gauteng as taxi operators appeared to be intent on forcing companies such as Intercape out of business through violent intimidation or extortion.

Police spokesman Warrant Officer Joseph Swartbooi said no arrests had been made in connection with the murder of Machana.

The new head of the Western Cape branch of the South African National Taxi Council (Santaco), Mandla Hermanus, said: “As Santaco we do not subscribe to violence and intimidation.”

Hermanus said Santaco was willing to intervene, “should the bus companies request our intervention”.

The Western Cape MEC for mobility, Daylin Mitchell, said he was aware of the shooting and was “seriously concerned” about attacks on long-distance bus drivers. He called on the police to do “all they can” to bring the criminals to book.

Daily Maverick has asked the Presidency about any interventions to assist the industry, but no response had been received by the time of publication. DM