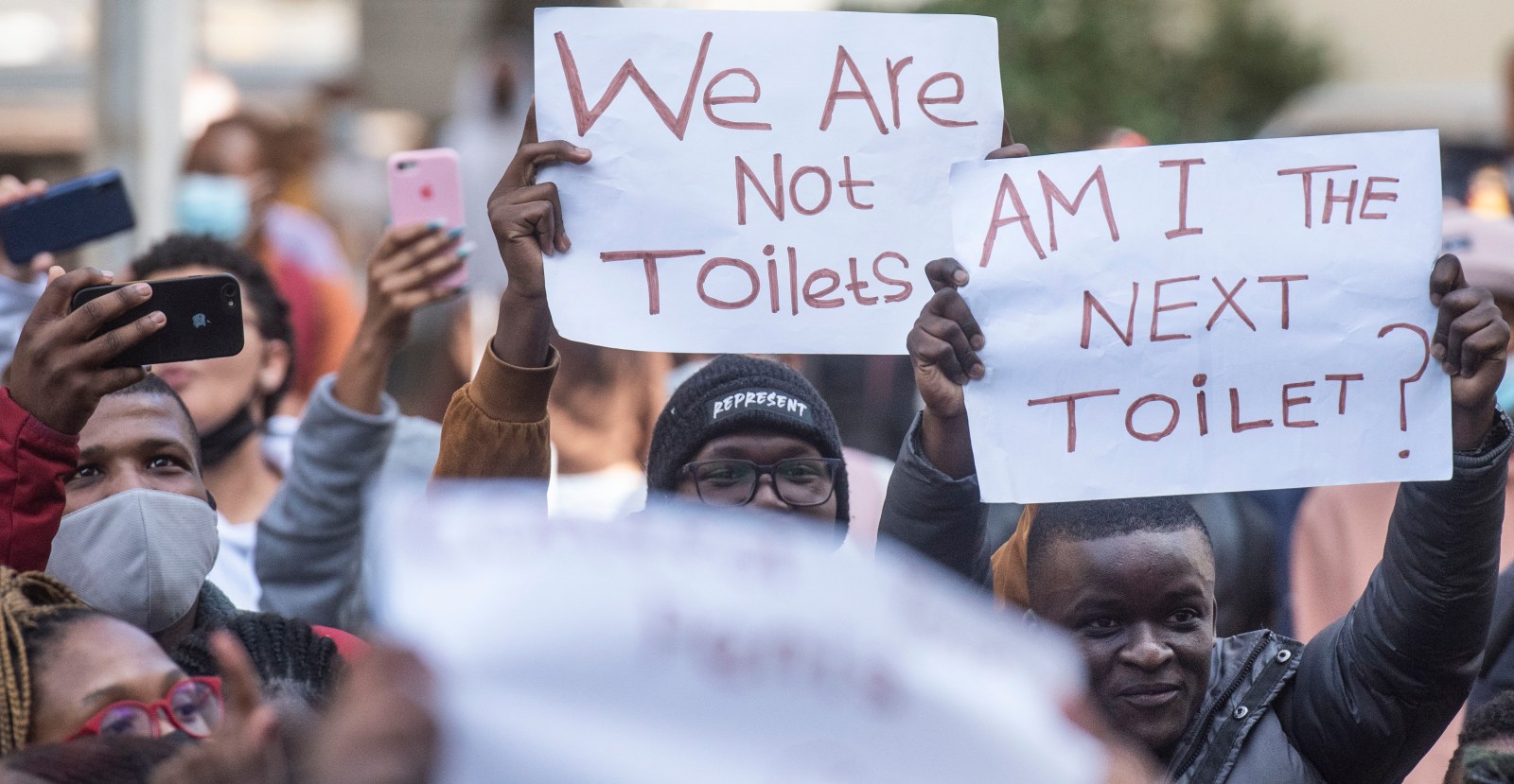 Students march against racism at Stellenbosch University on 19 May 2022, following the urination incident. (Photo by Gallo Images / Brenton Geach)

Unwanted residence culture, alcohol abuse and poor leadership are the result of societal ills plaguing a university community in Stellenbosch.

‘For every year there seems to be protest and an uproar, a protest or a commission” at Stellenbosch University (SU). So reads the expulsion judgment of Theuns du Toit, who urinated on the belongings of fellow student Babalo Ndwayana in the early morning of 15 May.

The widely condemned incident, which took place in Huis Marais, led to one of the biggest protests in the university’s history and affected the June/July exams.

But it was not this single event that led to mass outcry. As it came to the fore, so followed other judgments: the case of a similar urination incident was heard at Eendrag Residence, an accusation of racism at the Law Faculty dance was heard, and a rape case at Majuba Residence was filed with the police.

Just a few days after the Huis Marais incident, the rectorate instituted a commission of inquiry into racism at the university, led by retired Constitutional Court judge Sisi Khampepe. The university awaits the recommendations of this report.

The incidents at Stellenbosch are not specific to the institution.

After all, “Stellenbosch University is not an island”, said Professor Deresh Ramjugernath, deputy vice-chancellor of learning and teaching.

“We must understand that the university comes with a history and that history goes back to all of our spaces on the campus, as we have in society.”

Alcohol abuse, unwanted residence culture, discrimination and poor leadership were integral to the judgment of the urination incident in May.

However, the number of incidents of this nature at Stellenbosch was worrying, Ramjugernath said.

While the university has been in the process of transformation for years, the number of incidents shows that its processes and initiatives for change must be tightened and done a lot sooner.

Before the incident at Huis Marais, the university foresaw the need to strengthen several processes within the institution, said Ramjugernath.

These included tightening outdated residence rules and disciplinary processes, and establishing task teams working to address all aspects of student life on campus.

According to the Central Disciplinary Committee judgment in the Huis Marais incident, it had taken just less than 10 hours for the urination incident to be reported to a staff member.

A lot of focus would be placed on learnings outside the classroom, such as a compulsory module focused on education around shared humanity, said Ramjugernath.

He added that the university was working with NGOs to build a programme that would help to train leaders in addressing the issues that had come up in the recent incidents.

“If we want to produce the citizens [who] this country needs, it needs to start at institutes of learning. Not just higher, but also in basic education,” he said.

There was “zero tolerance” for infringement on human dignity, as it should be in the country, Ramjugernath said.

During his hearing, Du Toit pleaded that his actions were a “drunken mistake”, a result of a drinking habit he had cultivated to fit in.

According to the judgment, Du Toit, who had periodically blanked out during the evening, drank about one-and-a-half bottles of brandy between the evening of 14 May and the early hours of 15 May.

Read more in Daily Maverick: “White supremacy at Stellenbosch University — is anyone listening”

Lawyer William Fullard, Du Toit’s representative, told the panel that expulsion would be “an educational death penalty”. Instead, he asked for a rehabilitative punishment. Du Toit’s plea did not hold.

The student representative council at SU said that the committee’s ruling was a step in the right direction.

Like the other issues prevalent in the case, alcohol abuse is a countrywide concern.

In 2020, the university banned alcohol in residences, which was not wholly accepted.

According to a former house leader from the Eendrag Residence, who asked to be named as Mitchell, banning anything in a university residence is not a sustainable solution.

“[It] only serves to create further discord and disconnect between a residence leadership structure attempting to enforce the ban and the rest of the residence aiming to continue making decisions as autonomous adults,” he said.

Now, residence leaders and their residence heads are allowed to draw up their own alcohol policies in line with the residence rules.

This was the most “effective thing pursued in this time of turmoil”, according to Mitchell.

“This allows student leadership – but more importantly the broader residence community – the opportunity to feel more in control and influential in their current situation.”

He also said it was difficult to think that residence culture could turn an individual with no prior racially discriminatory traits into one capable of disregarding someone’s human rights in that manner.

Change within residence culture was possible through examples of his old residence leaders, who showed that “highly active… and resilient approaches to difficult conversations and creating a nurturing environment alike are leading to tiny incremental steps that might just make the difference to the individual”.

Even so, there were microcosms of undue and out-of-date influence on the campus, he said. These were especially dangerous to susceptible newcomers in their period of welcoming. DM168