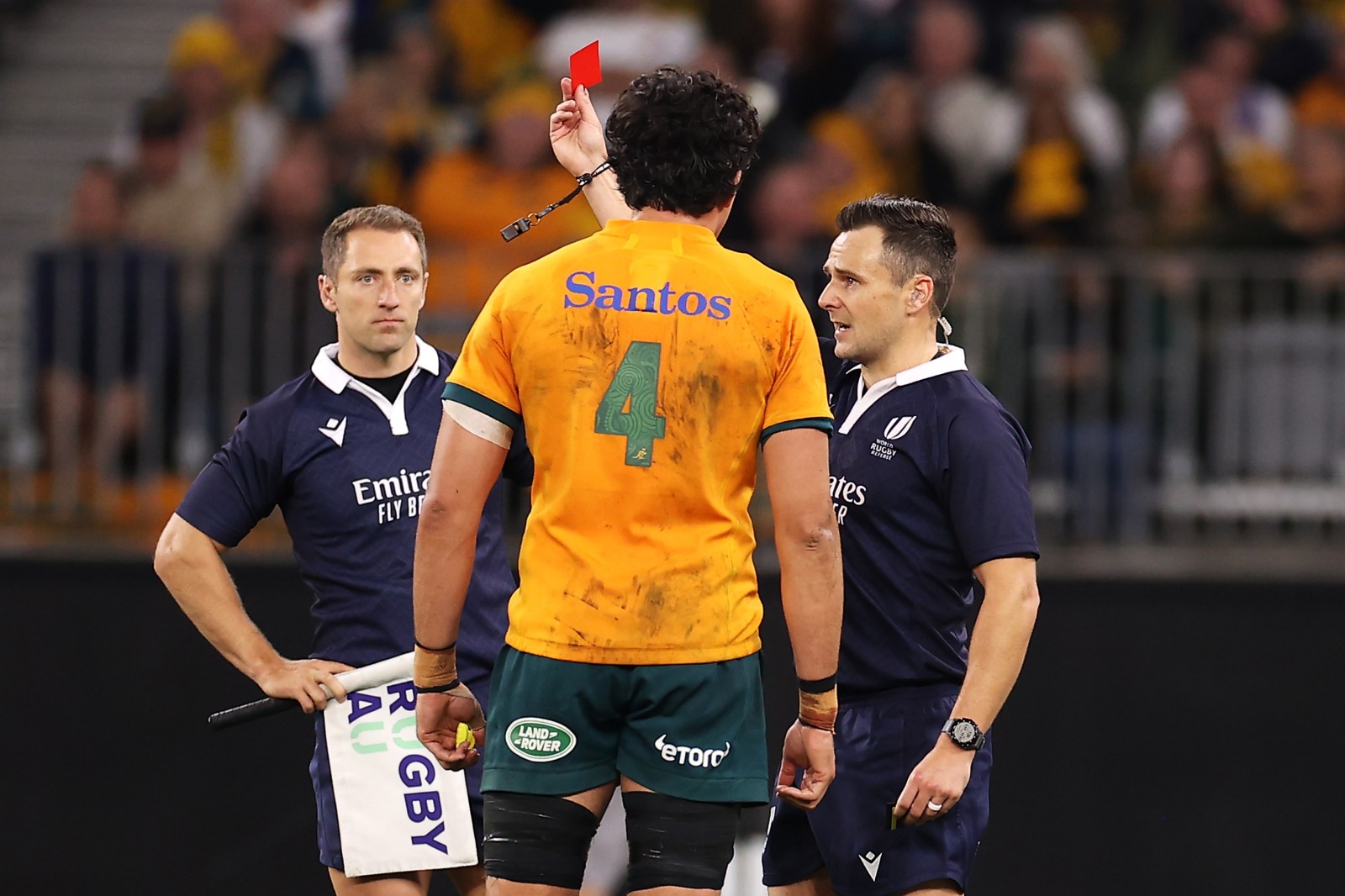 Sanzaar has introduced a 20-minute red card rule for the 2022 Rugby Championships, meaning sides won't be reduced to 14-men for the entire match if a player is red-carded. (Photo: Mark Kolbe / Getty Images)

Sanzaar, the body that governs Southern Hemisphere rugby, has opted to implement the 20-minute red card trial in the Rugby Championship.

In a week where 180 former players launched a class action against rugby authorities because of concussion-related health concerns, Southern Hemisphere bosses decided to reduce sanctions for head-high tackles.

On Thursday morning, to the sound of jaws dropping everywhere, the South Africa, New Zealand, Australia and Argentina Rugby (Sanzaar) alliance announced that it would continue to trial 20-minute red cards in the upcoming Rugby Championship.

Instead of a player who is guilty of a red card offence being ejected for the remainder of the game, his team will be able to send on a replacement once a 20-minute period in the sin bin has been fulfilled.

The same player cannot return, but a reserve can enter the match, to bring the offending team back to a full complement of 15 players (assuming no one else is in the sin bin).

The 20-minute red card policy has been in place for the last two versions of Super Rugby and was used in the 2021 Rugby Championship.

It’s a controversial decision in 2022 though, as the mood has changed. There is increasing evidence of players suffering long-term brain and motor neuron damage from repeated concussions. The obvious position should be to exercise caution and offer the best possible protection in a sport that is, by its nature, brutal.

Being a dangerous sport though does not mean accepting the status quo. Continuing to push the 20-minute red card solution, until more evidence is gathered, appears reckless.

The implication and tone Sanzaar are transmitting is that the integrity of the game (15 vs 15) supersedes punishment for dangerous play. Of course, the statement issued on the subject made all the right noises, but the reality is that the severity of red card sanctions has been lowered.

According to the statement, each of the four nations that make up Sanzaar “fully supported” the move.

The South African Rugby Union, whose provincial teams play in the Northern Hemisphere’s United Rugby Championship (URC) where the full red card punishment applies, have therefore endorsed a move out of step with their European partners.

Sanzaar CEO Brendan Morris said: “This is a great decision for The Rugby Championship and follows on from its application in Super Rugby.

“All the Sanzaar national unions — Argentina, Australia, New Zealand and South Africa — are fully behind the extension of the red card law trial. As a group, we firmly believe the integrity of international matches is very important and that wherever possible matches must be a contest of 15 versus 15.

“Within the context of the games’ laws, Sanzaar believes that a 20-minute red card allows for a significant deterrent to deliberate acts of foul play, while it also protects the contest of 15 on 15, which is what our unions, broadcasters and fans are telling us is important.

“Sanzaar stands alongside World Rugby’s important work on managing foul play and player welfare and will conduct a formal research project across the 2022 Rugby Championship period with all comparative findings to be shared with World Rugby at the end of the season.

“The aim is to gather the necessary information that allows the 20-minute red card trial to be accepted into the full laws of the game in the future.”

Sanzaar’s position can be understood through the prism of commercial value. Games where one player is sent off in the first minute (or later), are unquestionably marred as a spectacle.

That has consequences for fans, broadcasters, and sponsors who spend money on the “product”. By introducing the 20-minute red card, Sanzaar is attempting to mitigate the impact on the game of red cards, which almost exclusively stem from foul play.

And in the modern professional game, with so many cameras on players, the foul play usually manifests in the form of a head-high tackle, more often clumsy rather than intentional.

There are two major concepts at play here: punishment and behavioural change.

The 20-minute red card is certainly a punishment. Playing a quarter of the match with 14 men in a tight Test match is no small matter. If the red-carded player is the team’s most vital performer, it’s an additional punishment.

So, on the face of it, the 20-minute red card will act as a deterrent anyway, because it is a severe punishment.

However, punching, biting and other severe acts of thuggery will also only be punishable with a 20-minute sanction. Nowhere in Sanzaar’s correspondence does it appear to differentiate between types of red card infringements.

However, blatant thuggery is rare, given the possibly severe post-game consequences of it. But with a 20-minute red card, one of the deterrents for would-be bruisers to administer silent and illegal justice has been removed.

The second point though is more important. Will a 20-minute red card be enough of a deterrent to change behaviour? Most head collisions in the tackle situation are the result of poor technique by the tackler.

Leading with the head or being too upright in the tackle are the major reasons for head contact and resultant red cards. But if the tackler is under instruction to stay upright and attack the ball in the carrier’s arms to prevent an offload, that fault must be on the coach.

The chances of head collisions are greater if the tackler is upright and/or leading with his head. That’s indisputable. If the risk of employing this technique is possibly playing an entire game with 14 men, the coach might rethink his strategy.

If the consequence is less severe – 20 minutes in the sin bin – the coach might deem the risk acceptable and therefore behavioural change does not happen.

Only a comprehensive study will show whether full red cards or 20-minute red cards have more of an impact on lowering tackles.

Given the appalling situation involving so many players affected by concussion-related injuries, surely erring on the side of caution was a better way to go for Sanzaar. DM