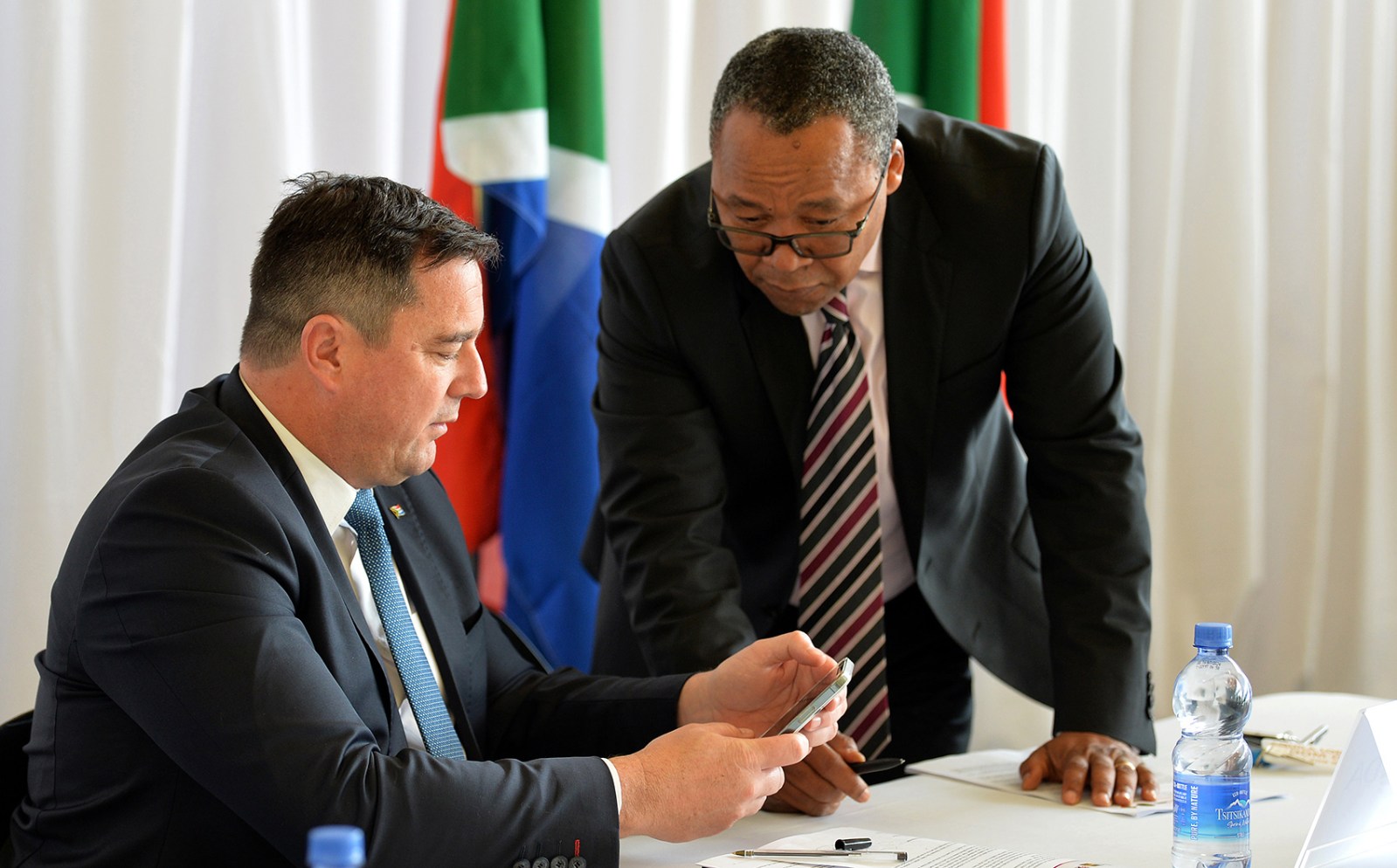 After months of negotiations seven parties in Nelson Mandela Bay have signed an agreement to form a new government in the metro. They will now seek 61 signatures on a petition for a special council sitting in an attempt to unseat mayor Eugene Johnson and her coalition government.

In the first step to unseat the current coalition government in Nelson Mandela Bay, seven political parties signed an agreement on Thursday to form a new local government for the Eastern Cape’s biggest metro.

The DA’s leader in the Eastern Cape, Nqaba Bhanga, called the agreement historic, adding that it had been discussed for eight months.

The parties are the DA, the African Christian Democratic Party (ACDP), the Freedom Front Plus, the Abantu Integrity Movement (AIM), the African Independent Congress (AIC), the PAC and the United Democratic Movement (UDM).

DA leader John Steenhuisen said the door was still open to the Northern Alliance, a small party that has three seats on the council, to join them.

Bhanga said the coalition agreement was based on certain principles.

“Something must be done to save Nelson Mandela Bay,” he said. “This is a very exciting day.”

The ANC and the DA obtained an equal number of seats (48) on the Nelson Mandela Bay City Council after the previous local government elections, with neither having 61 votes.

Read more in Daily Maverick: “The Politics: Bickering continues in Nelson Mandela Bay as taps are set to run dry”

The ANC managed to put together a coalition to govern the city, consisting of the Northern Alliance, the GOOD Party, the AIC, the UDM, the PAC, the Defenders of the People and the AIM, but after a falling-out with mayor Eugene Johnson she appeared to have stopped recognising the councillors from the Northern Alliance as coalition partners.

The Northern Alliance, GOOD and the Patriotic Alliance are not included in the new coalition deal.

Steenhuisen said the DA’s candidate for mayor would be Retief Odendaal, who was the mayoral member committee for finance under Athol Trollip. He is a senior politician in the city and a member of the provincial legislature.

Steenhuisen said the intention of the coalition was to bring hope and transparency to Nelson Mandela Bay, and while the coalition partners had different philosophies they agreed on a programme of action to put the metro on a new trajectory. “This is a city in great crisis,” he added.

However, he warned: “Coalitions are not easy. Nobody else is coming to save Nelson Mandela Bay. There is so little hope in South Africa. These coalitions are providing a silver lining.”

Wayne Thring of the ACDP said he hoped the new coalition will bring much-needed stability and change to the city.

The FF Plus’s Corné Mulder said the ANC had destroyed the city, and promised that a difference would be visible within six months.

Mahlubi Jafta from the AIC said they believed a coalition government should not be about the parties but about the people. “We must make a government that will be accountable.”

While others were a bit more diplomatic, Khusta Jack of the AIM did not mince his words.

“You will never understand the gravity of the decay, the lack of leadership and the lawlessness that prevail in this city,” said Jack, who serves on Johnson’s mayoral committee. “The current coalition is in a destructive mode.”

As of March 16 the council had become dysfunctional and the running of the city had been taken over by officials, he said.

“We joined the coalition because we wanted to be in government. It won’t be our aim to turn a blind eye to corruption. We will raise the alarm.”

They would also put a stop to the transfer of officials from failing municipalities to Nelson Mandela Bay.

“Council cannot be a cash cow to be used for elections and for never-ending conferences.”

It was the coalition’s aim to revive the metro’s economy. “We are going to build a great future here,” he said, adding: “I choose to hope. I love this city. We are going to get it right.”

The UDM’s Luxolo Namette said they were pledging their unwavering support to the new coalition and were fully committed to it.

“We will do everything to ensure that the coalition will become sustainable,” he said. “This is not a DA-led coalition. We are here for service delivery.”

The PAC’s Sandla Goqwana said their goal was to serve the people of Nelson Mandela Bay.

“Its administration is in shambles,” he said. “We don’t want to associate ourselves with any party political agendas. We will support stability in the metro and service delivery.”

On Wednesday afternoon the parties were drawing up a petition, for which they need 61 signatures to call a special council meeting where a motion of no confidence in Johnson will be voted on.

Steenhuisen said they hoped to proceed as soon as possible. DM/MC