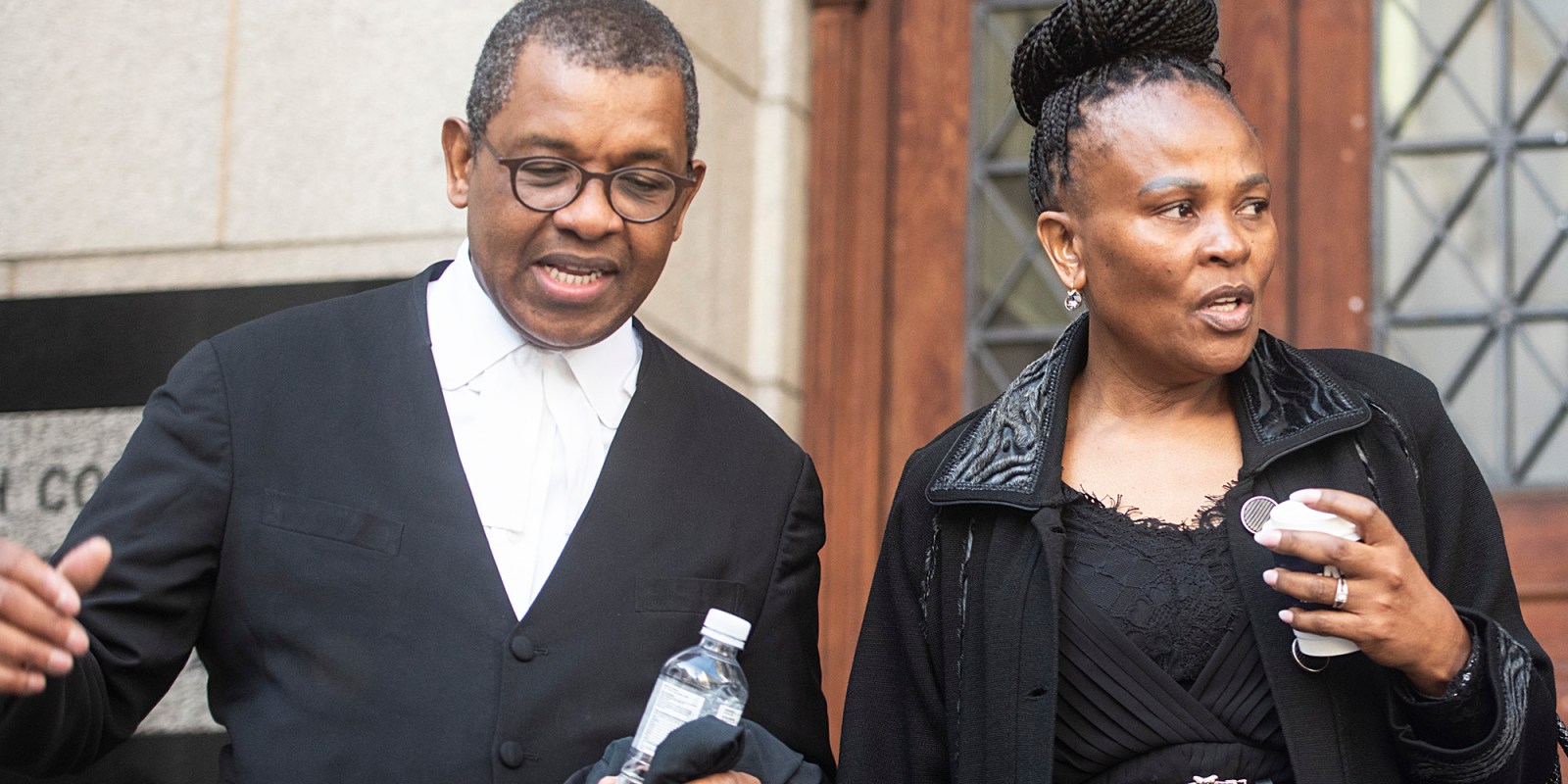 A squirrel’s leap from the National Assembly and her Section 194 impeachment inquiry, Busisiwe Mkhwebane and her legal representative, Dali Mpofu, on Monday headed for the trenches of the Western Cape High Court, where Mpofu argued his client still ‘embodied’ the office.

A further bid by the suspended Public Protector Busisiwe Mkhwebane to flush out information on the investigation she initiated into President Cyril Ramaphosa’s “cash in the couch” nosedived on Monday when the assistant state attorney, Mark Owen, informed the Western Cape High Court that the President’s replies to 31 questions would not be made public.

Ramaphosa submitted responses to questions from the Deputy Public Protector and now acting Public Protector Kholeka Gcaleka on 22 July, four days after the 18 July deadline. His legal team added that he would, however, abide by any decision of the courts.

Mkhwebane was suspended by Ramaphosa on 9 June. The day before, 8 June, she had launched an investigation into the President after a complaint lodged by the African Transformation Movement in relation to a break-in at the President’s private Phala Phala game farm in February 2020.

On Monday, the court heard that Ramaphosa’s replies would remain sealed for now. This, said Owen, was because Ramaphosa did not want to jeopardise the investigation into the break-in. During the theft, a large amount of cash in US dollars which had allegedly been stuffed into a couch was stolen.

A Full Bench of the High Court will this week hear Part B of an application by Mkhwebane to have her suspension by Ramaphosa overturned.

She has cited the President’s conflict of interest due to investigations by the Office of the Public Protector into the Phala Phala forex theft and an alleged “cover-up”, as well as other matters relating to Ramaphosa.

Her legal team has also argued that Ramaphosa acted “on the wrong advice of the Speaker” in suspending Mkhwebane.

Mpofu said Ramaphosa had a duty to determine the “jurisdictional facts” of a letter sent by Nosiviwe Mapisa-Nqakula informing the President that the impeachment process was under way. The letter was, he argued, “legally wrong”.

The “real significance”, charged Mpofu, was that the letter “was clearly intended to trigger the suspension and that is our only interest in it”.

On Monday, Owen informed the court that Ramaphosa’s private attorneys who are representing him in the Phala Phala matter had been in contact with the acting Public Protector.

It was she who had requested that the President’s replies be sent only to her office. This was, according to emails between the two parties, to prevent any “leakage of documents”.

Mpofu had earlier in the day set out the dramatic backdrop to Mkhwebane’s challenge of her suspension and the high political stakes.

“Look at the parties. A head of a Chapter 9 institution, the head of state and the head of the legislature. It can’t get more serious than that,” he told the court.

A depth charge was set off in these murky legal waters when Gcaleka announced earlier that the Office of the Public Protector would no longer fund Mkhwebane’s legal challenge in this matter.

Advocate Andrew Breitenbach, counsel for the Speaker, pointed out that Mkhwebane had, 2½ years before her suspension, sent a letter to her lawyers, signed by the CEO of the Public Protector of South Africa.

On Monday, Mpofu dismissed Gcaleka’s authority to withdraw from proceedings in the first place and conjured up an alchemy of entities to capture the thrust of his argument.

“There is no party called the Office of the Public Protector and thus it cannot withdraw if it is not part of the proceedings,” he informed the court.

The Public Protector of South Africa was only one person, claimed Mpofu: Busisiwe Mkhwebane.

This was a “very simple matter” and the Public Protector Act made this distinction clear, he argued.

“There are two parties theoretically: one is the Public Protector of South Africa, the applicant, and that party is inseparable from advocate Mkhwebane,” he stated emphatically.

There was, however, indeed “a different entity and it is a juristic entity called the Office of the Public Protector. Now that entity is not before you and is not party to these proceedings,” he added.

If Gcaleka wanted to withdraw from the proceedings, “she can sit in the court and watch if she likes” as she was not entitled to do so.

Mkhwebane is challenging her suspension, no vote has been taken by the National Assembly and the Section 194 inquiry is still in progress, which means, in Mpofu-speak, that Mkhwebane remains the Public Protector.

Mpofu said he would be touching on “at least eight of the 14 chapters of the Constitution” in this regard.

The Constitution, he argued, was there to protect Mkhwebane, whom, he claimed, was the victim of an ill-advised suspension by a President she was investigating.

At that point, Judge Lister Gcinikhaya Nuku observed that the Constitution was “also there to protect the institution”.

Mpofu argued that as was evident in the EFF Nkandla case and as former Chief Justice Mogoeng Mogoeng had pointed out, “the Public Protector is the biblical David against Goliath”.

The “person” of the Public Protector, he said, needed to be shielded.

“Human rights. She is a human person and she must be protected against any infringement of her rights.”