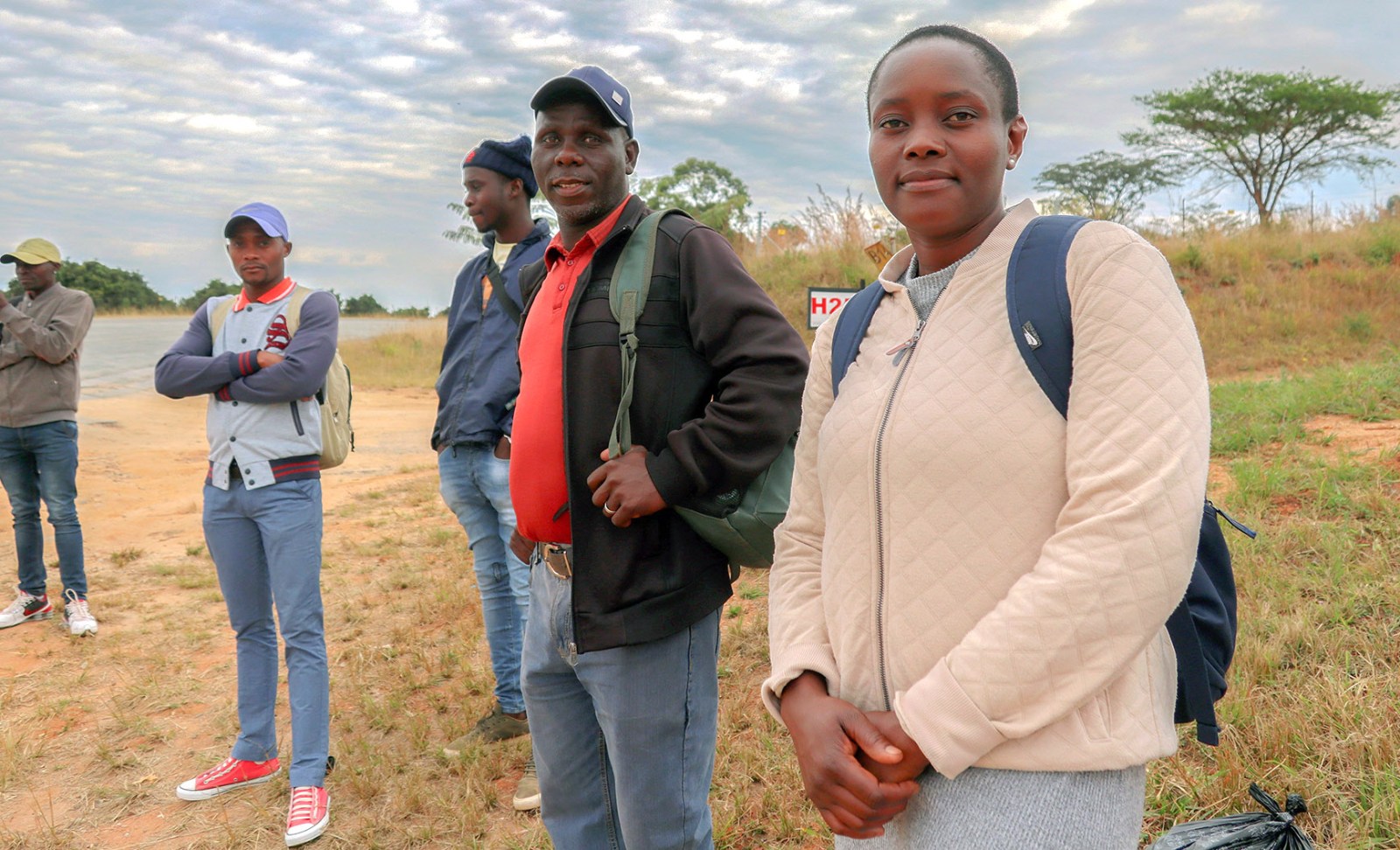 Farmworkers Sphiwe Nyalunge (36, centre background) and December Mbokodo (40, centre foreground) wait to catch a bus home after a day’s work outside White River, Mpumalanga. They are dreading August’s bus tariff hike that will see their fares increase for the second time in the space of a few months. (Photo: Maru Attwood)

For two days at the start of July, taxi and truck drivers across Mpumalanga blocked major roads in a failed attempt to secure lower petrol prices. This comes at a time when workers and unemployed South Africans continue to bear the burden of global inflation driven by Russia’s war in Ukraine. Maverick Citizen spoke to commuters and taxi drivers in the Mpumalanga Lowveld to gauge the impact on their lives.

When farmworker December Mbokodo (40) pays his monthly bus fare for August, it will cost him nearly R30 more than July’s fare. This price rise comes on top of the annual 6% increase he has been paying since April.

“It’s too expensive… life is difficult,” Mbokodo said. “What if the petrol price goes up, up, up? At the end of this year, payments for the bus are going to be increased again.”

Every day, Mbokodo leaves his home near Hazyview at 5am to begin his two-hour commute on a Buscor bus. Buscor is the Mpumalanga Lowveld’s largest bus company and the only service that runs to Mbokodo’s workplace at a macadamia farm just outside White River.

For the first time in Buscor’s history, the petrol price hikes have forced the company to raise tariffs outside its annual April increase.

Without an increase in wages, workers will soon be facing a cost-of-living crisis. The combination of rising transport and food prices is tough for Nyalunge to bear.

On Wednesday, Statistics South Africa reported that June’s Consumer Price Index had soared to 7.4%. This is higher than any inflation South Africans have endured in 13 years. The last time it was higher was during the global financial crisis.

Hikes in transport costs are one of the biggest components of the CPI rise. Stats SA reported: “Transport goods and services recorded an average annual price increase of 20%.”

People who rely on the taxi industry — the primary mode of transport for millions of South Africans — are feeling the rise in prices acutely.

Frank Maphanga is a 51-year-old taxi driver from Pienaar, a town 30km outside Mbombela. He drives local routes from the Mbombela central taxi rank to areas around the city.

Since the petrol price hikes, Maphanga says he is running at a loss.

“This causes a quarrel between us drivers and the owners… the taxi owners. Because we are on business, and if you are on business, you need to make a profit.” Maphanga has three grandchildren. “They all depend on the money I am getting from this taxi.”

To adjust for petrol price hikes, taxi associations in Mpumalanga reported that they are raising fares by around 10%. But increases of even just a few rands can have a severe impact on commuters.

Zanele Moiene (44) is a domestic worker from Msholozi, Mpumalanga, who commutes to work in a taxi. Now spending more on fares, she says, “I must cut my groceries right down. I must cut them down and the kids are complaining.”

Meanwhile, the money she puts towards savings or longer-term projects, like building her home, is drying up. “I was building by myself, but now I’ve stopped… I’m working just for food and transport,” said Moiene.

The increase in taxi fares comes a few weeks after taxi drivers in the region attempted a protest on 6 July to pressure the government into addressing the price hikes.

Sifiso Makwakwa (36) is a taxi driver who participated in the shutdown. Drivers closed off roads and prevented people from refuelling at petrol stations. Makwakwa said, “Our government nowadays, when you talk, they take time to respond. But when you start to get a reaction, that’s when they start listening and they start doing what you want.”

After two days, the shutdown ended without success.

Maphanga said, “Because it was only Mbombela, we didn’t get any support from the government. Our main aim was for the government to pay attention to this petrol hike. But unfortunately it didn’t work as planned. It was just a loss… We proved ourselves wrong.”

The road closures and disrupted supply chains caused by the shutdown cost Mpumalanga’s mining industries significantly, which will only worsen economic stresses.

‘It is not the government, it is international’

Dube, speaking on behalf of taxi associations in Mbombela, emphasised that the shutdown was not sanctioned by the associations, but was carried out by drivers acting of their own volition. He said: “We understand… we watch the news… it is not the government who is influencing the price hike. It is international.”

The scale of the problem is enormous. The petrol price is set by a global industry that earns profits of $2.8-billion a day, while also driving the climate crisis. And prices are being pushed higher by Russia’s war, more than 8,000km away in Ukraine.

But the localised impacts are intense. Farmworkers and commuters bear the brunt as everyday essentials are becoming unaffordable. Transport workers in Mpumalanga tried to effect change in the most drastic way they could, to no avail.

There’s a sense of powerlessness and frustration among the people, as the causes of their suffering are global financial and military crises not of their making. DM