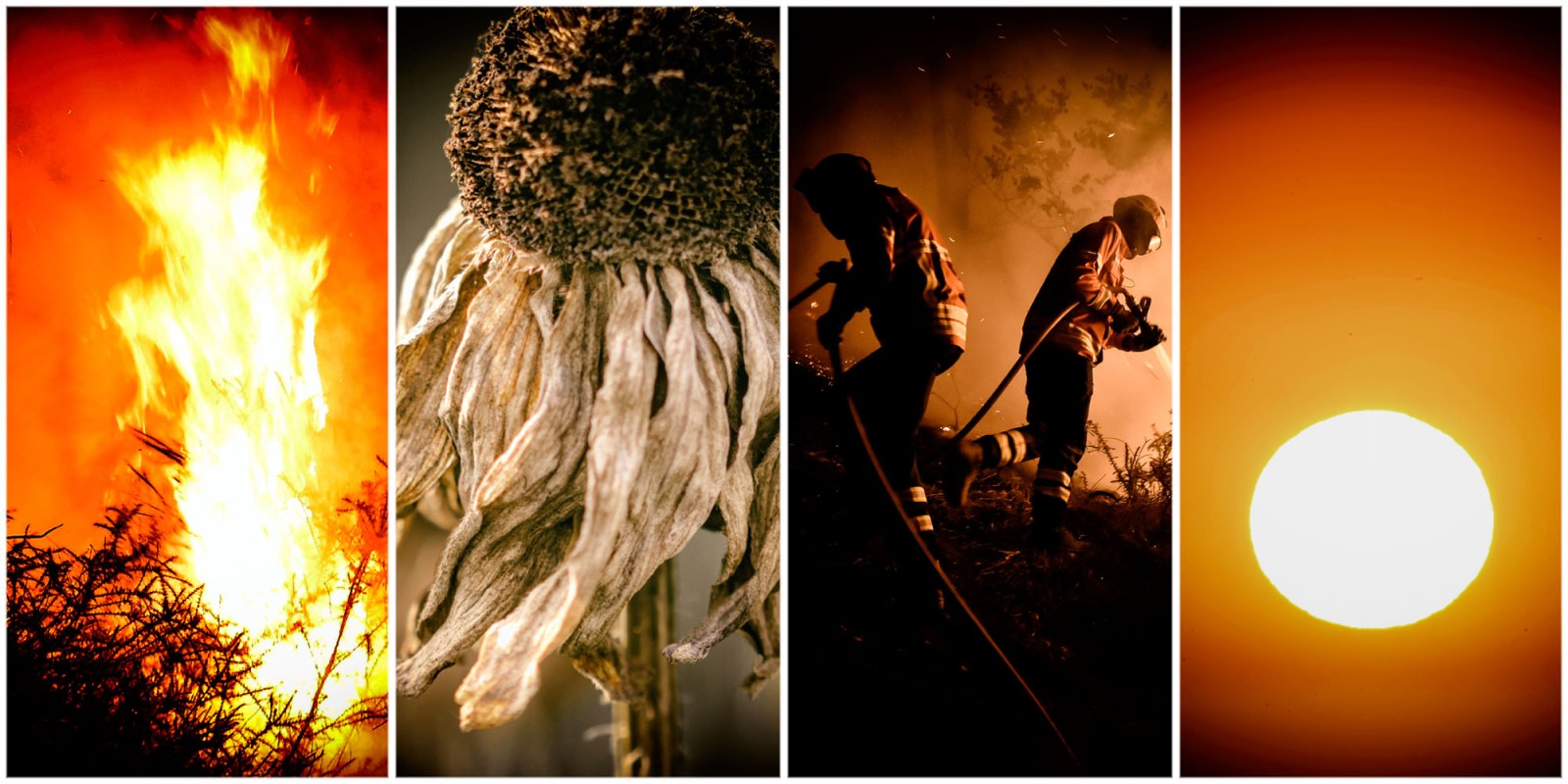 Firemen fight a wildfire in the surroundings of the village of Memória in the municipality of Leiria in the centre of Portugal on 12 July 2022. (Photo: EPA-EFE / Nuno Ferreira) | Unsplash / Pawel Czerwinski | Lui Graterol

Hotter, more frequent heatwaves are now commonplace. Europe is in the grip of a record-breaking heatwave and wildfires are raging across the Mediterranean. Climate change is behind these recent events.

Climate change makes heatwaves hotter and more frequent. This is the case for most land regions, and has been confirmed by the UN’s global panel of climate scientists (IPCC).

Greenhouse gas emissions from human activities have heated the planet by about 1.2°C since pre-industrial times. That warmer baseline means higher temperatures can be reached during extreme heat events.

“Every heatwave that we are experiencing today has been made hotter and more frequent because of climate change,” said Friederike Otto, a climate scientist at Imperial College London, who also co-leads the World Weather Attribution research collaboration.

But other conditions affect heatwaves too. In Europe, atmospheric circulation is an important factor.

A study in the journal Nature this month found that heatwaves in Europe have increased three to four times faster than in other northern mid-latitudes such as the US. The authors linked this to changes in the jet stream – a fast west-to-east air current in the northern hemisphere.

To find out exactly how much climate change affected a specific heatwave, scientists conduct “attribution studies”. Since 2004, more than 400 such studies have been conducted for extreme weather events, including heat, floods and drought – calculating how much of a role climate change played in each.

This involves simulating the modern climate hundreds of times and comparing it to simulations of a climate without human-caused greenhouse gas emissions.

For example, scientists with World Weather Attribution determined that a record-breaking heatwave in western Europe in June 2019 was 100 times more likely to occur now in France and the Netherlands than if humans had not changed the climate.

The global average temperature is around 1.2°C warmer than in pre-industrial times. That is already driving extreme heat events.

“On average on land, heat extremes that would have happened once every 10 years without human influence on the climate are now three times more frequent,” said ETH Zurich climate scientist Sonia Seneviratne.

Temperatures will only cease rising if humans stop adding greenhouse gases to the atmosphere. Until then, heatwaves are set to worsen. A failure to tackle climate change would see heat extremes escalate even more dangerously.

A heatwave that occurred once per decade in the pre-industrial era will happen 4.1 times a decade at 1.5°C of warming, and 5.6 times at 2°C, says the IPCC.

Read in Daily Maverick: Summertime, and the livin’ ain’t so easy

Letting warming pass 1.5°C means that most years “will be affected by hot extremes in the future” according to Seneviratne.

In the Mediterranean, that has contributed to the fire season starting earlier and burning more land. Last year, more than half a million hectares burnt in the EU, making it the bloc’s second worst forest fire season on record after 2017.

Countries such as Portugal and Greece experience fires during most summers, and have infrastructure to try to manage them – though both have received emergency EU help this summer. But hotter temperatures are also pushing wildfires into regions not used to them, and thus less prepared to cope.

Not the only fire factors

Forest management and ignition sources are also important factors. In Europe, more than nine out of 10 fires are ignited by human activities such as arson, disposable barbeques, electricity lines or littered glass, according to EU data.

Countries such as Spain face the challenge of shrinking populations in rural areas, as people move to cities, leaving smaller workforces to clear vegetation and avoid “fuel” for forest fires building up.

Some actions can help to limit severe blazes, such as setting controlled fires that mimic the low-intensity fires in natural ecosystem cycles, or introducing gaps within forests to stop blazes rapidly spreading over large areas.

But scientists concur that without steep cuts to the greenhouse gases causing climate change, heatwaves, wildfires, flooding and drought will significantly worsen.

“When we look back on the current fire season in one or two decades’ time, it will probably seem mild by comparison,” said Victor Resco de Dios, professor of forest engineering at Spain’s Lleida University. DM/OBP