Graeme Smith emerges as the main kingmaker in South Afr... 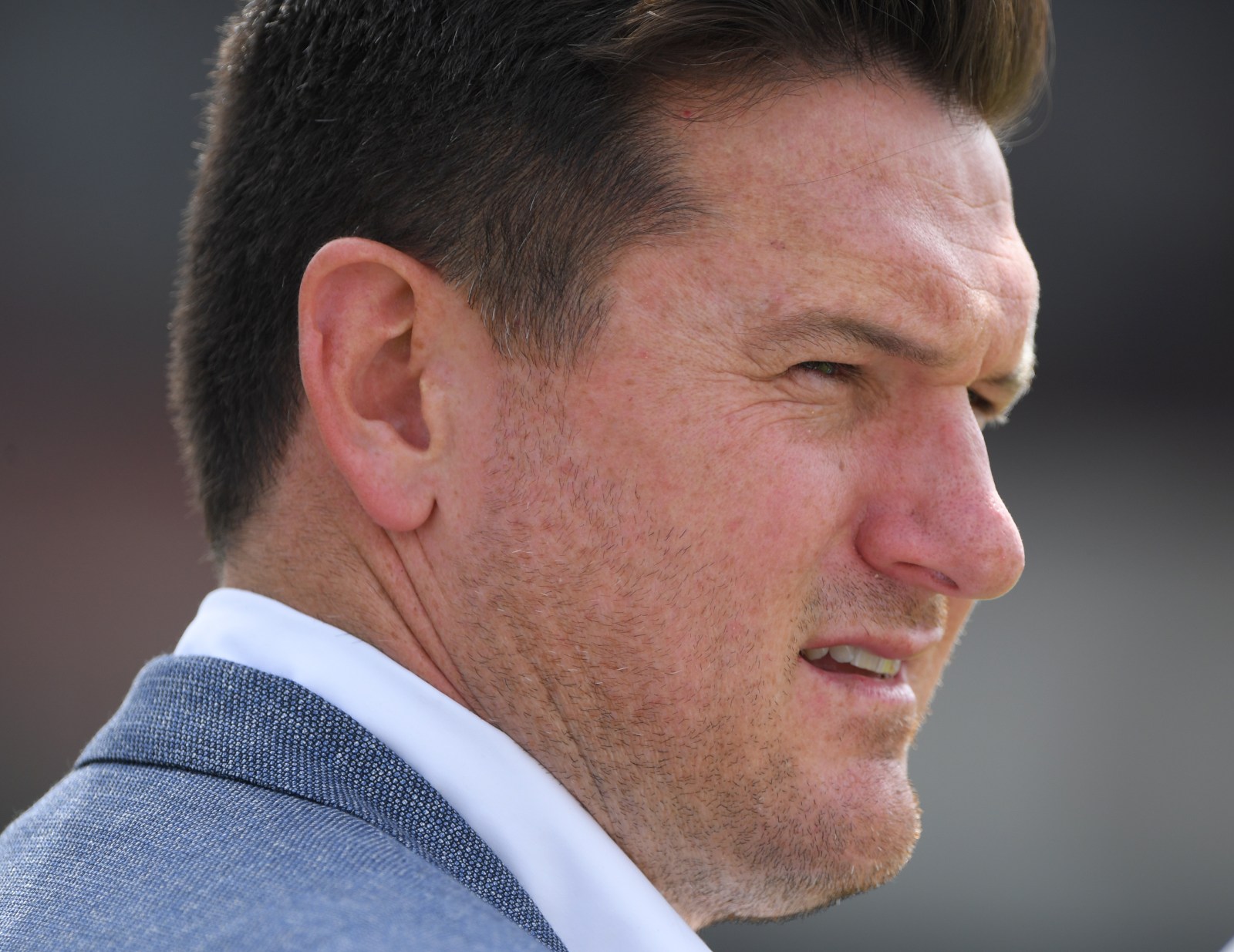 Former director of cricket Graeme Smith has again emerged as a key role player in CSA’s dealings with India, this time as commissioner of the newly formed South African T20 League, which starts in January 2023. (Photo: Stu Forster / Getty Images)

Former director of cricket Graeme Smith has emerged as the kingmaker in South Africa’s new T20 League that will be interlinked with the Indian Premier League.

Late in 2021, when Cricket South Africa (CSA) was anxiously wringing hands over whether India’s men’s team would tour South Africa for a series that meant income of hundreds of millions, Graeme Smith played a central role in making it happen.

As CSA’s director of cricket at the time, Smith’s designated role was not to negotiate bilateral tours between countries. That level of detail is left to chief executive officers. But Smith’s relationship with Board for Control for Cricket in India (BCCI) president Sourav Ganguly was crucial in paving the way for the tour to take place.

Smith’s direct line to his old on-field rival and now administrative colleague Ganguly was vital in ensuring India received the correct messaging and assurances amid fears of a fourth Covid-19 wave over the summer.

The tour went ahead, the Proteas won the Test and one-day series and CSA benefited to the tune of about R600-million, according to sources.

Smith has again emerged as a key role player in CSA’s dealings with India, this time as commissioner of the newly formed South African T20 League, which starts in January 2023.

After being dragged through an acrimonious witch hunt and arbitration dispute with CSA over alleged racial bias and racism, which resulted in full vindication for Smith, he appears to have put South African cricket first.

Smith won his case against CSA with costs, but suffered untold reputational damage in the process. Despite this, he has continued to serve the South African game in the background.

Read in Daily Maverick: “Graeme Smith cleared of racism but suffers reputational damage that might never be repaired”

For the past three months Smith has been working on the T20 project despite not being formally appointed. His close relationship with current CSA chief executive Pholetsi Moseki has been crucial because Smith’s relationship with the remainder of CSA’s hierarchy is “strained”, to put it mildly.

“I’m deeply committed to South African cricket and happy to serve the game as best I can,” Smith said.

“I’m excited by the opportunity to deliver the new league which I believe will be an extremely competitive product, one that can bring the much-needed investment into the game and provide new opportunities for players around the world and more importantly to our South African homegrown talent.

“The response from stakeholders has been very positive and we’ve made great progress in the initial stages. We’re determined to deliver a valuable, sustainable and appealing tournament for South African cricket.”

The new tournament doesn’t have a name yet, but on Wednesday CSA confirmed that the six franchises all have Indian owners. All six are linked to existing Indian Premier League (IPL) clubs, giving the South African league a cricketing highway to India’s massive domestic market.

It has the potential to make South African cricket financially stable and even hugely profitable, after a comprehensive but rapid bidding process for owners.

The open bid process, managed by Deloitte Corporate Finance, attracted 29 entities who expressed interest in owning a franchise worldwide. More than 10 venues were made available for interested bidders to own a franchise and all 10 of them received expressions of interest.

The six successful bidders who will be part of this significant chapter of South African cricket are: 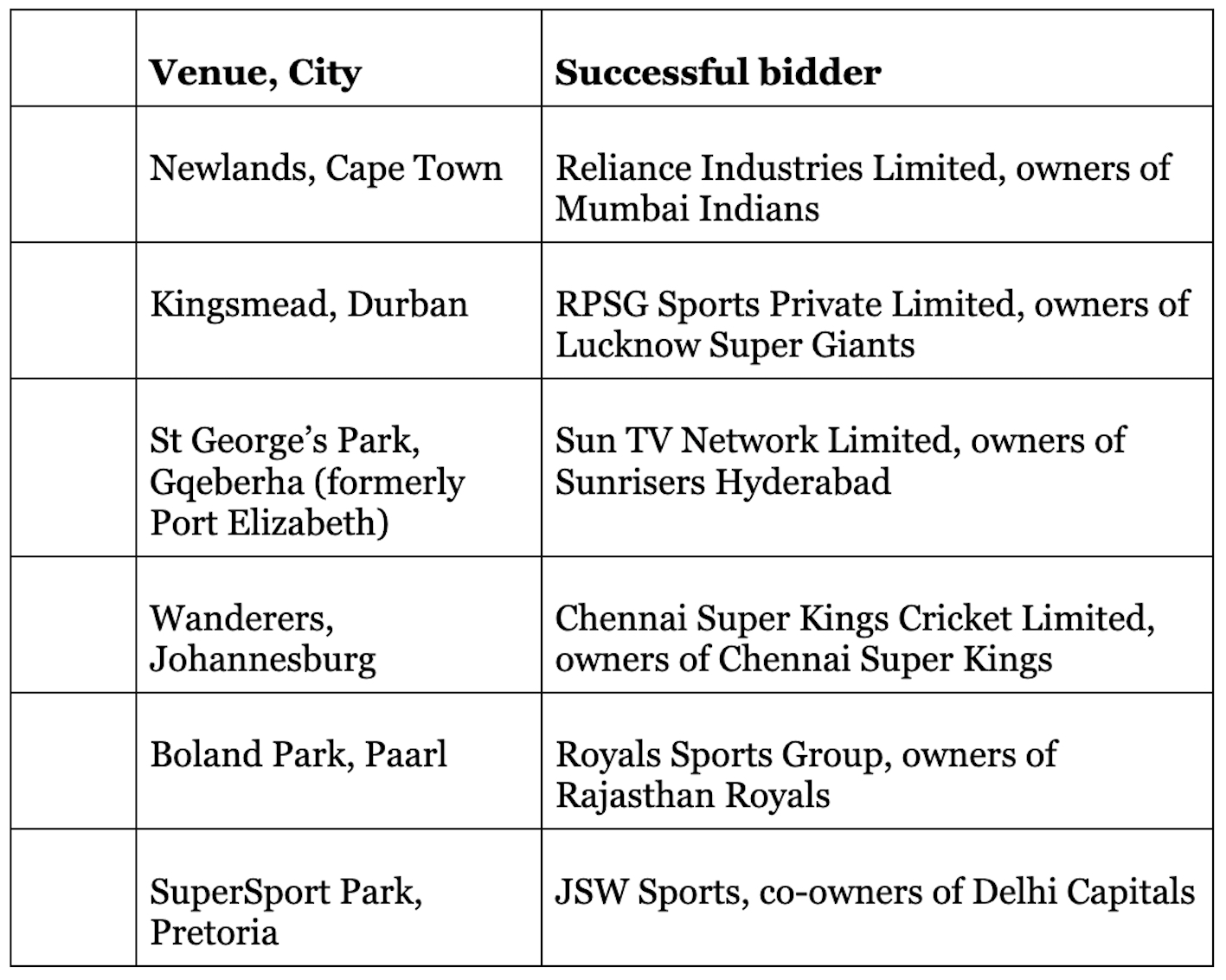 Daily Maverick has learnt that 25 top international players have been signed for the league so far. That excludes Indian players, who are still in negotiations with the BCCI about release clauses for play in the South African tournament.

“We are thrilled to welcome our new franchise owners to the South African League taking place in January and February 2023,” Smith said. “This is truly an exciting time for South African cricket; the overwhelming interest shows that the country remains valued in the global cricketing ecosystem.

“A robust bidding process was followed to select the final six owners; the decision was informed by a scorecard based on various criteria to ensure the utmost professionalism, independence and objectivity to the process. I would like to thank Deloitte as our advisers for doing a thoroughly professional job in helping South African cricket find partners who add substantial value to our game.

“The strong sports background of the respective owners and the global brands they manage ensures that South African cricket and the broader industry will benefit from their expertise and resources, as they bring stability and experience to the league.”

In addition, the new franchise owners have all contractually committed to running development programmes in South Africa, and for South African talent.

It has taken extensive work to get the league to this stage in such a short time. CSA is a 57.5% shareholder, SuperSport holds 30%, while former BCCI head Sundar Raman is the minority shareholder.

A new board, consisting of CSA (Moseki and Mark Rayner) and two SuperSport representatives, will be established. Raman and representatives of the six franchises might also have representation when it’s formalised.

Crucially Smith will report to the T20 League board and not to CSA.

Despite his new role and position as kingmaker in relations with India, Smith has no desire to work directly with CSA board or the Members Council again.

Smith’s appointment and power in the new league, which, barring an unforeseen collapse, will become the major revenue drive for CSA, is problematic for some elected officials.

After two previous failed attempts to launch a T20 competition, at least this time there is a sub-Saharan TV broadcast deal in place, with pay channel SuperSport. It is the most vital aspect of making a franchise T20 League of this nature viable.

But there are still details to iron out for the ambitious January 2023 start, most importantly the sale of international broadcast rights. With six teams, and a conservative budget of R20-million per franchise, it will be a costly start-up.

Each team will have up to six foreign players, and the six teams will play in a double round with the top three sides moving to a playoff. In total, 33 matches are scheduled to be played over three to four weeks from January and into February 2023.

Although purists don’t want to hear about it, the stark reality of modern cricket is that T20 tournaments are the most lucrative domestic money spinners – especially if they attract an Indian fan base.

CSA’s proposed reboot of a domestic T20 tournament has the lofty ambition of being the “second-biggest T20 tournament” after the IPL.

It’s easy to understand why governing bodies globally want a piece of the T20 pie. The IPL sold its 2023-27 broadcast rights for $6-billion.

No other global T20 league comes close to the IPL in terms of popularity. But the South African proposal and formal association with IPL clubs will give it a footprint in India that no other T20 League offers.

And straddling the two countries is Smith. The kingmaker. DM