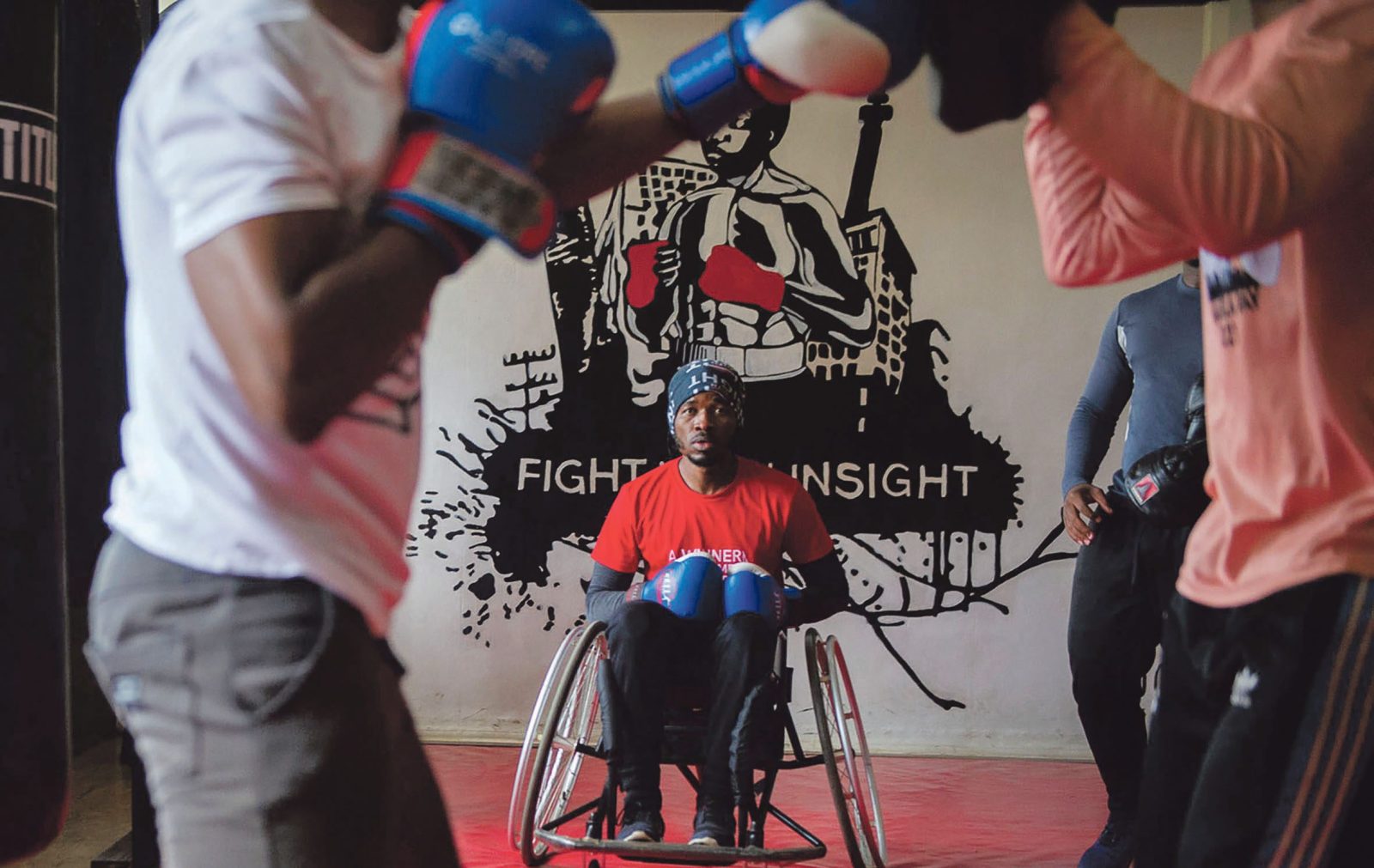 Adesanya Joel Adebayo with his trainer Lucky Mlakalaka (25) at the Fight with Insight gym in Parktown. (Photo: Alet Pretorius)

Now Adesanya Adebayo is on a mission to popularise the sport in the ‘land of opportunity’.

Most mornings, Adesanya Joel Adebayo is up before dusk, strapped into his racing wheelchair and doing laps in the street outside his house in the south of Johannesburg.

He wants to get his training done before the traffic gets too busy in the morning, but seeing Adebayo (41), who also goes by the name “Tony”, doing press-ups and sit-ups in the street next to his wheelchair after his laps is not an uncommon sight.

Adebayo then moves into the yard where he does a few sets of pull-ups in a door frame. It is only when he skips rope that his disability – an effect of childhood polio – is visible, with his left leg noticeably weakened.

But that has never held him back.

Besides working at a salon where he stands for most of the day, Adebayo also competes in wheelchair racing and wheelchair powerlifting. After his morning training sessions at home, he usually spends his mornings – especially on days when he isn’t busy at the salon where he works in Braamfontein – at the Fight with Insight boxing gym bordering Hillbrow.

Adebayo, originally from Nigeria, has been living in South Africa for more than 10 years. He calls it “the land of opportunity”, explaining that since he moved here, it has enabled him to realise his dream of becoming the first wheelchair boxer in South Africa.

He took part in an exhibition match in November 2019, where his opponent – an able-bodied person – sat in a chair while Adebayo was in his wheelchair. He said he and his team were still trying to sort out licensing and find a suitable opponent for his first real fight – something he hoped would happen in the coming months.

In the meantime, Adebayo continues dreaming about popularising the sport, and inspiring people with disabilities to take up boxing. “Being a champion, you are not a champion for yourself, you are a champion for others,” he said.

“Being in the wheelchair and not doing anything, it’s traumatising. It’s [stressful]. You wouldn’t believe that you can do better just being alone… So being a pioneer or being the first wheelchair boxer, those are the things I think I can change about people.

“It is a joy for me being the first wheelchair boxer. I think I will be able to touch people’s lives. Not giving them money, but changing their life and their way of thinking.”

With a wife and two young sons still living in Nigeria, Adebayo has a responsibility to send money back home to them every month. So he has relied on donations or his own innovation to ensure he can continue exercising and pursuing his sporting ambitions.

The wheels of an old rubbish bin are used as an ab roller in his early-morning workouts, and he has glued pieces of rubber on old workshop gloves to protect his hands when he races with his wheelchair.

Adebayo credits the Fight with Insight gym where he trains for not just helping with his boxing journey but also keeping him afloat during Covid-19 and lockdowns. “I learnt love there. Sport brings people together. I learnt how to give,” he said.

Since its launch as an amateur boxing gym in 2006, more than 1,000 children and young people have tried out boxing at the gym, with a number of South African and pan-African boxing champions calling it home.

While many migrants, refugees and asylum seekers often face many hurdles in South Africa, including a growing resentment and hostility towards them in the form of xenophobic groups such as Operation Dudula, Adebayo said he has not experienced any discrimination from South Africans while trying to follow his dream.

Read in Daily Maverick: “South Africa has a US Open champ – his name is Lucas Sithole”

“You see, you can’t generalise things. Even in my own country, there are people like that…

“To be honest with you, South Africa has changed my life. When I was in Nigeria, with all the education I had, I did not have confidence in myself. South Africa will let you know that you can do it,” Adebayo said.

Adebayo said that with Fight with Insight’s philosophy he has not only learnt how to box, he has also become more socially aware. The lessons he has learnt at the gym include rejecting tribalism, fighting gender-based violence and the importance of respect for everyone.

If he isn’t working on his fitness or refining his boxing skills, Adebayo practises the saxophone, playing over his favourite jazz or gospel tracks on the radio. “I used to play the drums in church. But now I pick up my saxophone in the mornings and I play after I exercise in the mornings.”

He credited his faith with carrying him through many of the obstacles he has faced in life, but it was his mindset that pushed him the most, he said. “There are so many opportunities in this country. That is why I said South Africa has opened my eyes to many things. If you work hard, you will get there.” DM168 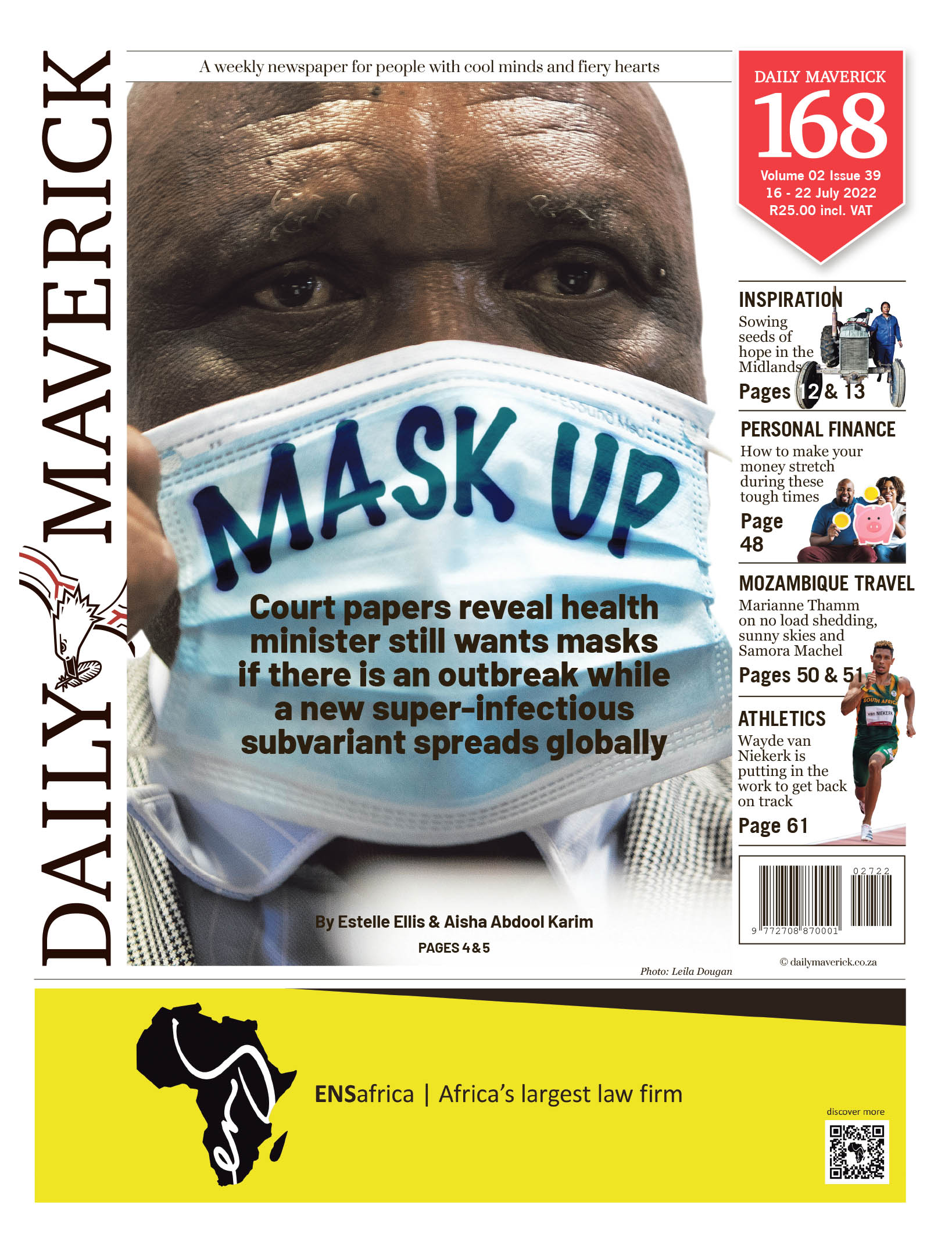