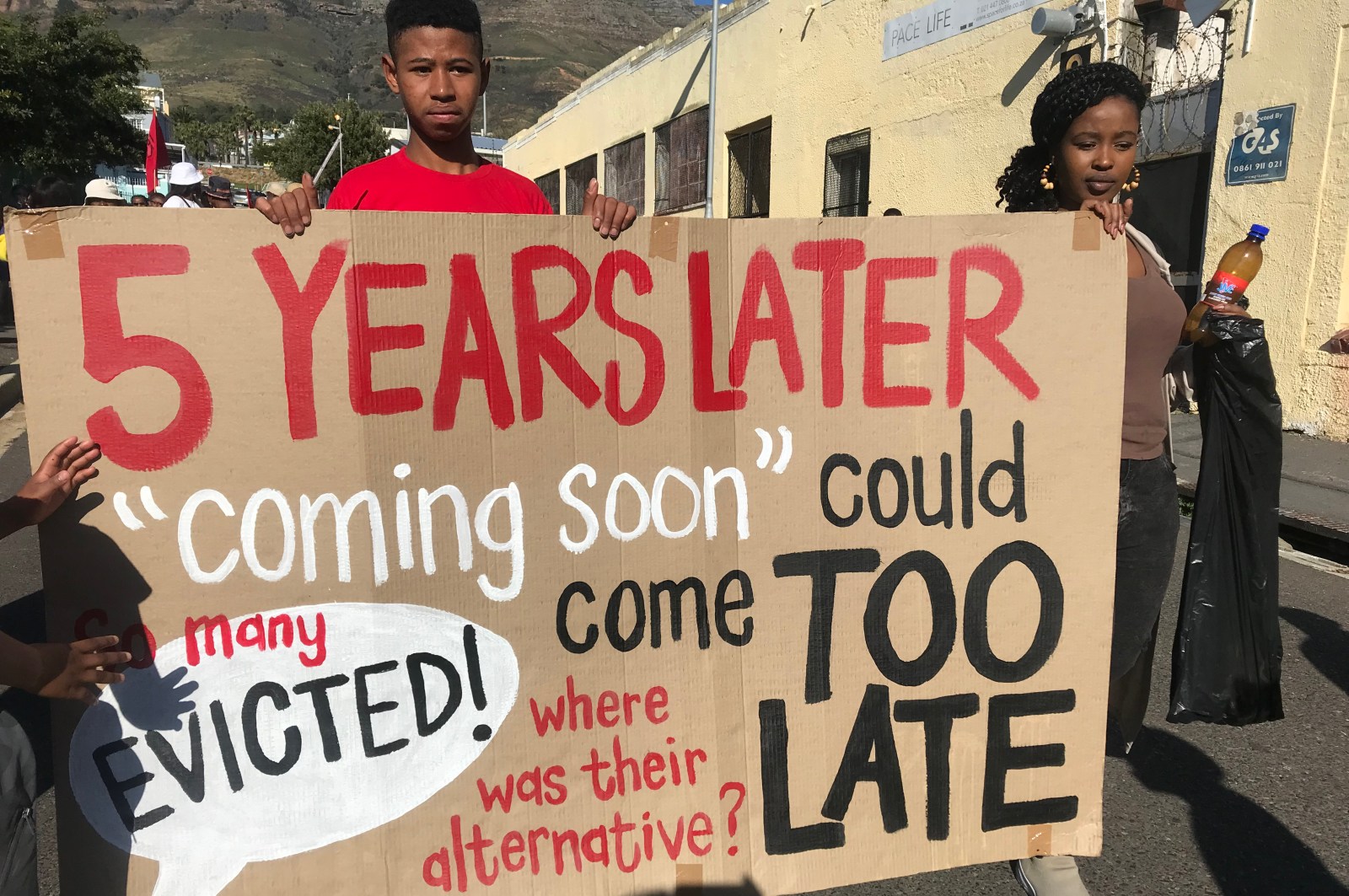 Over 100 people marched on Saturday to three sites where social and affordable housing projects in Woodstock and Salt River are to be built. (Photo: Tariro Washinyira)

City blames ‘major’ delays on the occupations by Reclaim the City in 2017.

“It’s been five years since a plot of land [at Victoria Park in Woodstock] was earmarked for social housing. When will the homes be built?” asked Karen Hendricks, a member of the housing movement, Reclaim the City.

On Saturday, Hendricks was among over a hundred people that walked through neighbourhoods surrounding Cape Town’s city centre to sites where social housing developments are to be built. The group walked to three of 11 sites that were earmarked for social housing in 2017 by the City.

Many of the marchers live at the old Woodstock Hospital which has been renamed by occupants to Cissie Gool House. The former hospital is home to many people who were displaced by the gentrification of the Woodstock and Salt River communities. GroundUp has reported on the occupation, and the challenges many occupiers have been facing since the start of the Covid lockdown.

The march, hosted by Reclaim the City and Ndifuna Ukwazi, was to highlight the City of Cape Town’s failure to build affordable housing in well-located areas, as it had promised.

At the site in Victoria Park, marchers drew outlines of housing floorplans in white chalk. “We’re standing in blocks that could be our future houses,” said Hendricks. “For the past five years, there has been no transparency from the government regarding this site. The developments are not built for big families and they are done without our participation. We’re saying nothing for us without us.”

Hendricks said they want the City to compile a report and survey Cissie Gool House residents on whether they would qualify for future affordable and social housing projects.

The organisations said that the occupations at Cissie Gool House and Ahmed Kathrada House in Green Point (formerly the Helen Bowden Nurses Home) are currently the only affordable housing opportunities for poor and working-class people in the metro. “It’s home to the elderly, single women-led families, as well as domestic workers, teachers, and crafts workers,” said Hendricks.

“The City has lacked the necessary urgency to develop the 11 sites identified 2017, and instead is in a protracted legal court case attempting to evict over 300 families at Cissie Gool House.”

Fagmeeda Ling, a leader at the old hospital occupation, was among 13 families evicted from Albert Road in Woodstock. “The City offered us alternative accommodation in Blikkiesdorp, Wolwerivier and Kampies. We didn’t want to be thrown 45km away from the city because this is where we were born and stayed all our lives,” she said.

After the commemoration walk, a documentary on the Cissie Gool occupation by Sara CF de Gouveia was screened.

Ndifuna Ukwazi said that only one of the projects has been completed. It is the Pickwick Road transitional housing project that offers temporary housing to just 19 families. “None of the other sites has even broken ground! While some of the projects have shown signs of progress [including the Pine Road, Dillon Lane and Pickwick Road projects], most have stalled or made no apparent headway,” said an 11 July press statement released by Ndifuna Ukwazi.

In a statement released on 16 July, Mayoral Committee Member for Human Settlements Malusi Booi, said the City had different social housing projects, in partnership with social housing institutions, underway in the city centre. Booi said this week the mayoral committee would recommend to Council that the Salt River Market site be handed over to the social housing partner for construction to start.

According to the City, sites nearing the construction phase include: Pine Road where about 240 units homes are to be built and Dillon Road with 150 units in Woodstock. The Salt River Market will see 200 units built.

It said projects still in land use management processes include New Market, where 200 units are to be built; Pickwick with 600 units; and Woodstock Hospital with 700 units.

“One of our major constraints in accelerating the pipeline of affordable housing — especially on certain inner city sites — is the cost and time burden of unlawful occupation, and the lengthy court processes to unlock otherwise suitable land. Securing land and buildings also presents a significant cost burden over time, but it is essential to protect valuable land for affordable housing development,” the City said.

“The orchestrated building hijackings of March 2017 by Ndifuna Ukwazi under the Reclaim the City banner, in particular, have delayed flagship social housing projects in central Cape Town. We are determined to fast-track this social housing through the correct legal channels.” DM