Ramaphosa weighs in on Phala Phala: 'I will not be bull...

Ramaphosa weighs in on Phala Phala: ‘I will not be bullied into submission’ 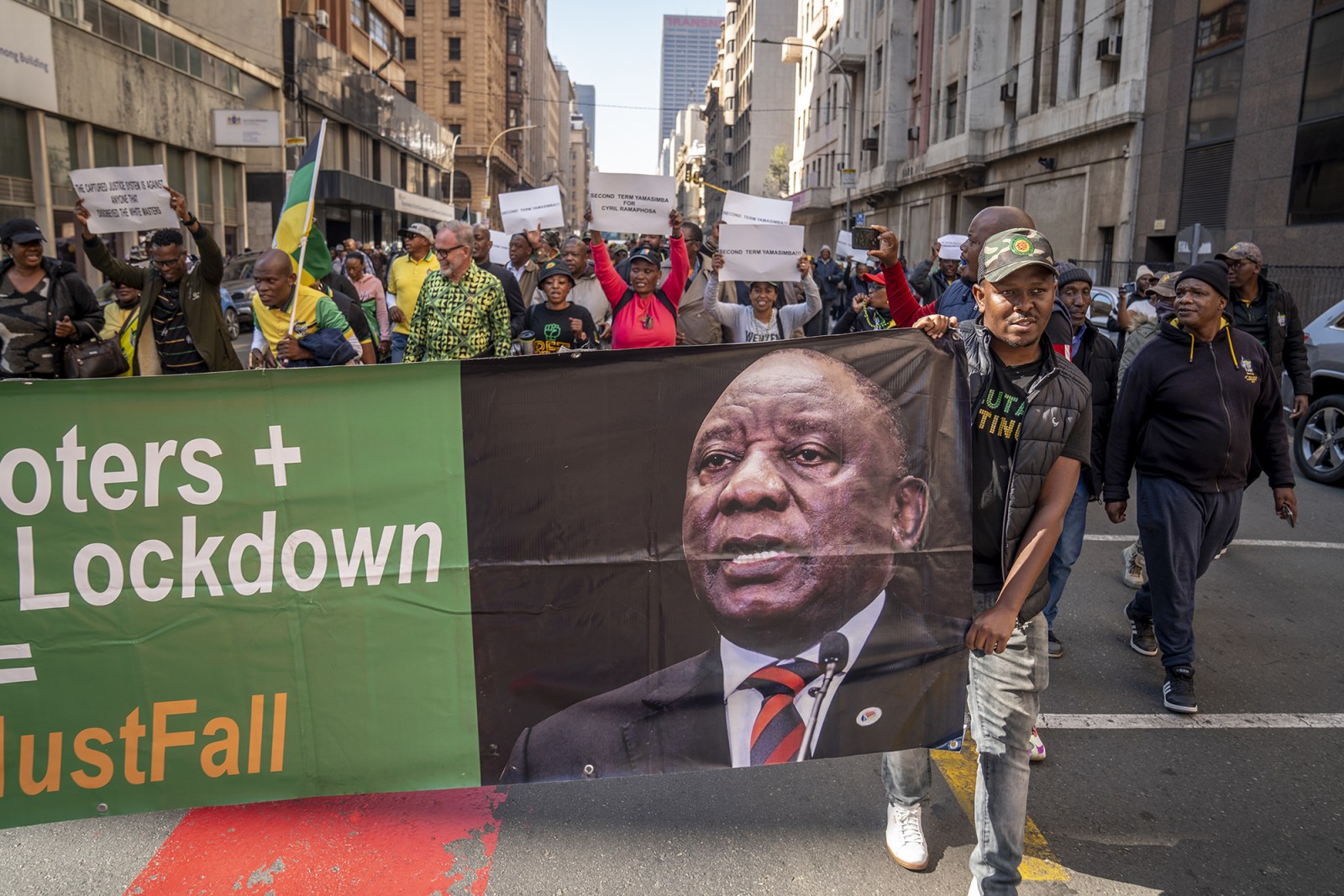 Carl Niehaus and others march on Luthuli House in Johannesburg to hand over a memorandum demanding that Cyril Ramaphosa step down as president, 15 July 2022. (Photo: Shiraaz Mohamed)

Insisting that he is fully committed to the ANC and to the country, the president says he won't be bullied over the issue and has offered to appear before the party's integrity committee.

Cyril Ramaphosa said that he is fully committed to his duty as party leader and president of the country and will not be sidetracked by allegations around the Phala Phala saga.

“I will not be intimidated, nor distracted, nor bullied into submission.”

This was the message ANC president Cyril Ramaphosa sent to his detractors on Friday morning, saying that he will not allow the allegations of criminality at his Phala Phala farm in Limpopo derail his mission of rebuilding South Africa’s ailing economy.

Ramaphosa was delivering the ANC’s message of support at the SACP congress under way at a hotel in Boksburg.

As he was addressing the congress, a #RamaphosaMustGo protest, led by the former spokesperson of the now disbanded Umkhonto we Sizwe Military Veterans’ Association Carl Niehaus, was being staged outside Luthuli House in the Johannesburg CBD. Niehaus was dismissed from the ANC last year.

This is the right time for organising, getting out onto the streets in our thousands, and demand radical change.

I’llcertainly be there in the forefront of this march by ANC members, and all concerned citizens, to Luthuli on Friday the 15th of July. #RamaphosaMustGo! pic.twitter.com/8zIj7VbXmq

Ramaphosa said he was prepared to be held to account if he was found to be involved in any wrong-doing, adding that no one is above the law.

“The allegations contained in the complaint are serious and it is only correct that they be thoroughly investigated and that the due legal process be allowed to take its course, without interference. As we emerge from the era of State Capture we must be fervent on the principle that no person, not a single person, is above the law and that everyone regardless of their position they occupy must be held accountable for their actions,” he said.

[WATCH] ANC President Cyril Ramaphosa says he will not allow the #PhalaPhala allegations to derail him from rebuilding the economy: “I will not be intimidated, nor distracted, nor bullied into submission.” pic.twitter.com/uJ9KGnsxLo

Ramaphosa will appear before the ANC’s integrity committee in the coming weeks, where he will have to account for what happened at his farm. For now, he says wants to invest his time and energy in the country’s economy.

“I have pledged my full cooperation to the investigation process that is under way. I am prepared to be held accountable. I opted, out of my own volition, to appear before the integrity committee that was meant to meet a week ago but it did not suit anyone but we will finalise another date in days to come. But what I would like to say is that I will not allow these allegations to deter me from what needs to be done to rebuild our economy.”

“We must welcome that the president commits to a process of this nature instead of using his position to try and prevent these things from being thoroughly scrutinised. We must welcome that because it is a breath of fresh air. However, let us not be blinded at the same time as communists: the reason why this matter gets reported to the police, the intention is not to fight corruption. The intention is part of a counter-revolutionary fight-back directed at dislodging the leadership of the ANC and the leadership of government,” he said.

[WATCH] Nzimande commends president Cyril Ramaphosa for how he has dealt with the Phala Phala allegations: “It is a breath of fresh air from where we come from.”#SACPCongress2022 pic.twitter.com/3nhPiFgCbR

The public first became aware of the theft at Ramaphosa’s farm on 1 June 2022, when former director-general of the State Security Agency Arthur Fraser laid criminal charges against Ramaphosa, accusing him of defeating the ends of justice, kidnapping and money laundering.

The former spy boss claims that large undisclosed sums of US dollars were stolen from Ramaphosa’s farm in February 2020, but instead of reporting the matter to the police, the president unlawfully instructed Presidential Protection Unit head Wally Rhoode to investigate it. Rhoode’s investigation apparently linked the perpetrators to a domestic worker on the farm.

Ramaphosa is alleged to have paid suspects, including his domestic workers, R150,000 each to not reveal that they had been kidnapped and interrogated.

The SACP will be electing new leaders during its four-day congress. The party’s first general secretary, Solly Mapaila, is a strong candidate to take over from Nzimande as he has the support of most delegates.

Nzimande has, however, made it clear that he would still be willing to be a part of the SACP’s top brass and is rumoured to be running for the chairperson position. DM