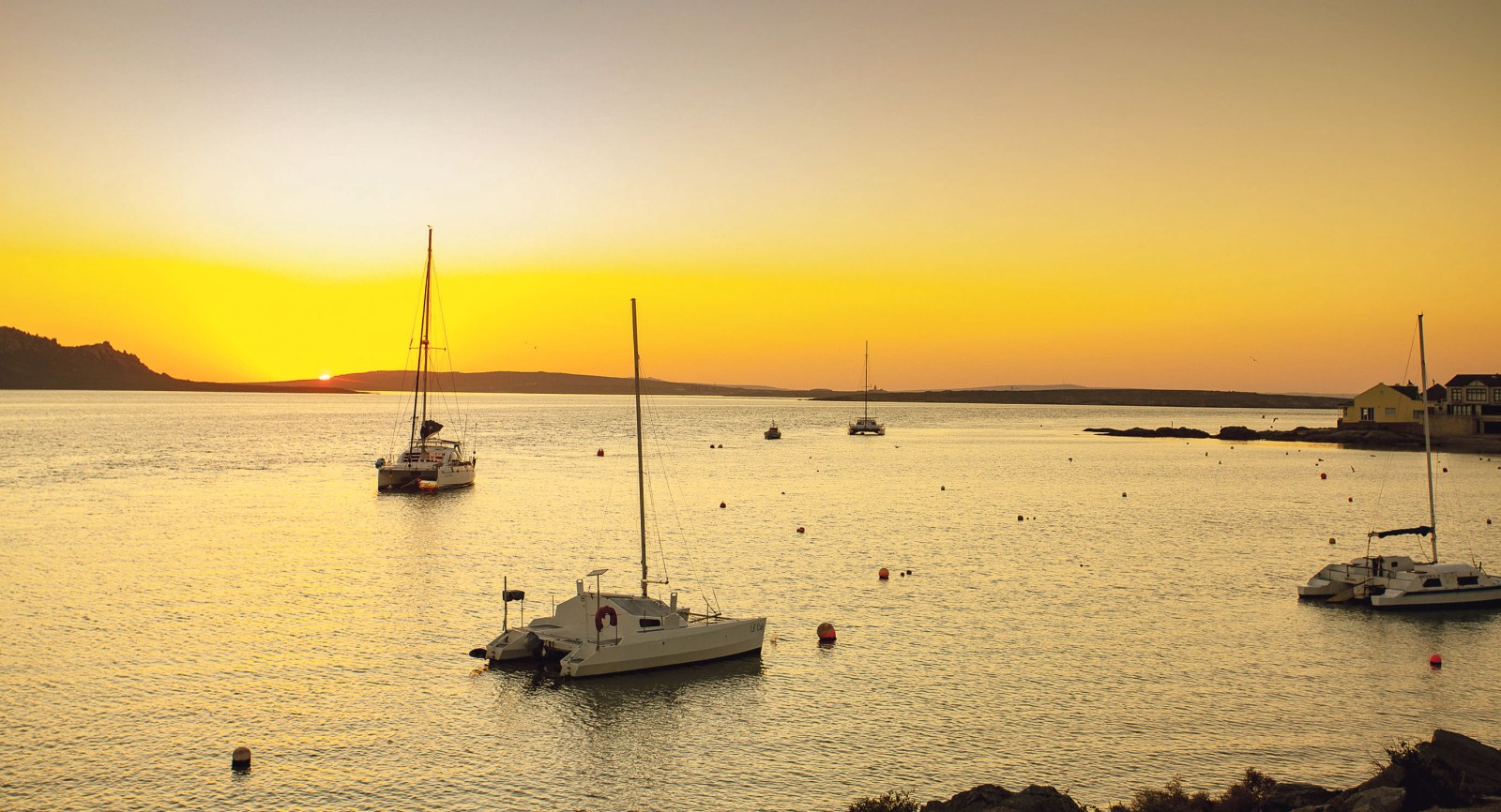 A general view of Saldanha Bay from Langebaan - a town in the Western Cape province of South Africa - dependent on the harvesting economy. (Photo: Gallo Images/Jacques Stander)

Conservation isn’t a privilege, but a value that all communities should embrace.

The obvious value of a marine protected area (MPA), which places limits on human activity, is the conservation of ecosystems and marine life. But Pierre de Villiers, senior manager for Cape Nature, spoke at the recent Plett Marine Science Symposium about the socioeconomic value of MPAs for people, such as upliftment and upskilling projects that provide opportunities for communities who were historically dependent on the harvesting economy.

De Villiers explained to DM168 that it’s important to monitor the natural changes and increase in marine life populations, and this is where the communities come in. MPAs are also used to track climate change because they function as a site for long monitoring to evaluate “natural” change over time.

After identifying an area with ecosystems and species in need of protection, a marine protected area is developed, a process that involves public participation — engaging with the community that will be affected. This includes those projects that give communities alternative employment opportunities.

One of these projects is the Marine and Coastal Community Monitors, a WWF project in partnership with Cape Nature (which provides the on-the-ground experience) and Overstrand Municipality.

This year, they are studying towards their Higher Certificate in Criminal Justice. With this certificate, says Kholofelo Ramokone, project coordinator for Small Scale Fisheries, Marine Programme at the WWF South Africa, they can apply to work with law enforcement or Cape Nature.

One of the programme participants, Kopanang Jankie, from Kleinmond, was working as a carpenter before he joined the programme when he was 22.

At that time he didn’t care much about the marine environment — it was just an opportunity to study further and get employment in a tough economic climate.

“But as time goes, I saw the importance and the difference that my team and I are bringing to the ocean,” said Jankie, recalling how when he was a child visiting the ocean he would play with oystercatcher eggs, not realising the value of them, and he didn’t understand the impact of littering.

“People … they depend on the ocean, and so it’s important for us to save it and to take care of it.”

Marcelin Barry, whose mother catches fish for a living, has always had a relationship with the ocean. But when he first joined the programme, it was also just about getting a job.

“But eventually when you start doing this every day … it becomes a lifestyle for you. Everything changed,” said Barry. “Especially when you see how people look at you now. They don’t just see people walking around the coast, they even ask questions [about the marine environment]. We can easily tell them what is happening because of the daily activities that we are doing, and the importance of it.”

Illegal, unreported and unregulated fishing, including poaching and illicit trading, is a global problem.

De Villiers said that in 2008 you could see 24 to 30 poacher vessels catching West Coast rock lobster in a marine protected area, and 50 divers diving for abalone, which fetches R2,000 a kilogram on the international eastern market.

“You’ve got to turn the culture around so that people start really valuing marine protected areas because they are actually getting a job out of it, or money.”

According to the Department of Forestry, Fisheries and the Environment’s Status of the South African Marine Fishery Resources 2020 report, fish stocks have improved — going from 46% of fish stocks being of concern in 2012 to 39% in 2020 — largely owing to the implementation of management measures based on robust stock-assessment and scientific advice. These management measures include revised limits on “allowable catch” and fishing effort (such as numbers of vessels, fishers and type of fishing gear used).

But although fish stocks have improved over the past eight years, there are still 24 stocks of concern — including abalone, with the department’s report stating its “status … continues to decline in response to extremely high levels of illegal harvesting and over-allocation of total allowable catches”, as well as the West Coast rock lobster, which remains heavily depleted.

The rock lobster stock is only at 1.8% of pre-fished levels, and “there is continued concern regarding the levels of illegal harvesting of the resource”.

To protect the community monitors, their job doesn’t involve reporting poachers or any compliance officers’ duties, just monitoring and recording the coastal and marine environment.

“It’s difficult for us… You know, everyone wants to make a living,” said Barry.

“All we can do is just to educate our people so they understand the impact of such activities.”

Why should communities care?

Getting a community on board that has been dependent on the harvesting economy is no mean feat. But Barry thinks it’s important to protect our species so that future generations can experience them.

“For me, personally, I have two kids, and I want them to see what’s in our ocean.”

Additionally, there are projects that involve remote underwater videos with fishermen and local communities, showing them the incredible marine life below the surface.

“It changed their mind … that they can even look after [the marine environment],” said Barry.

“At the end of the day, they can change their minds and see things differently. Because one can change. It’s sometimes the situation they are living in, or [the influence of] friends.”

Is conservation a privilege?

About mitigating the climate crisis and caring about conservation, it is often said that low-income communities don’t have the capacity to care about conserving their environment when they have other more pressing social issues.

Conservation has often been seen as an inaccessible privilege, or “a white people thing”.

De Villiers said, “over time you change the culture of the people who used to depend on fish, who now understand the value of the MPA because it’s giving them an alternative livelihood.

“But it takes time, they need to understand that fishing isn’t the only way to make money.”

Jankie said that before he didn’t know anything about this sector. “But now, it’s not just only a ‘white person’s problem’, but anyone who lives in that community should take care of their nature.” DM168