Enyobeni tavern manager arrested on liquor charge, but still no word on what killed 21 youngsters 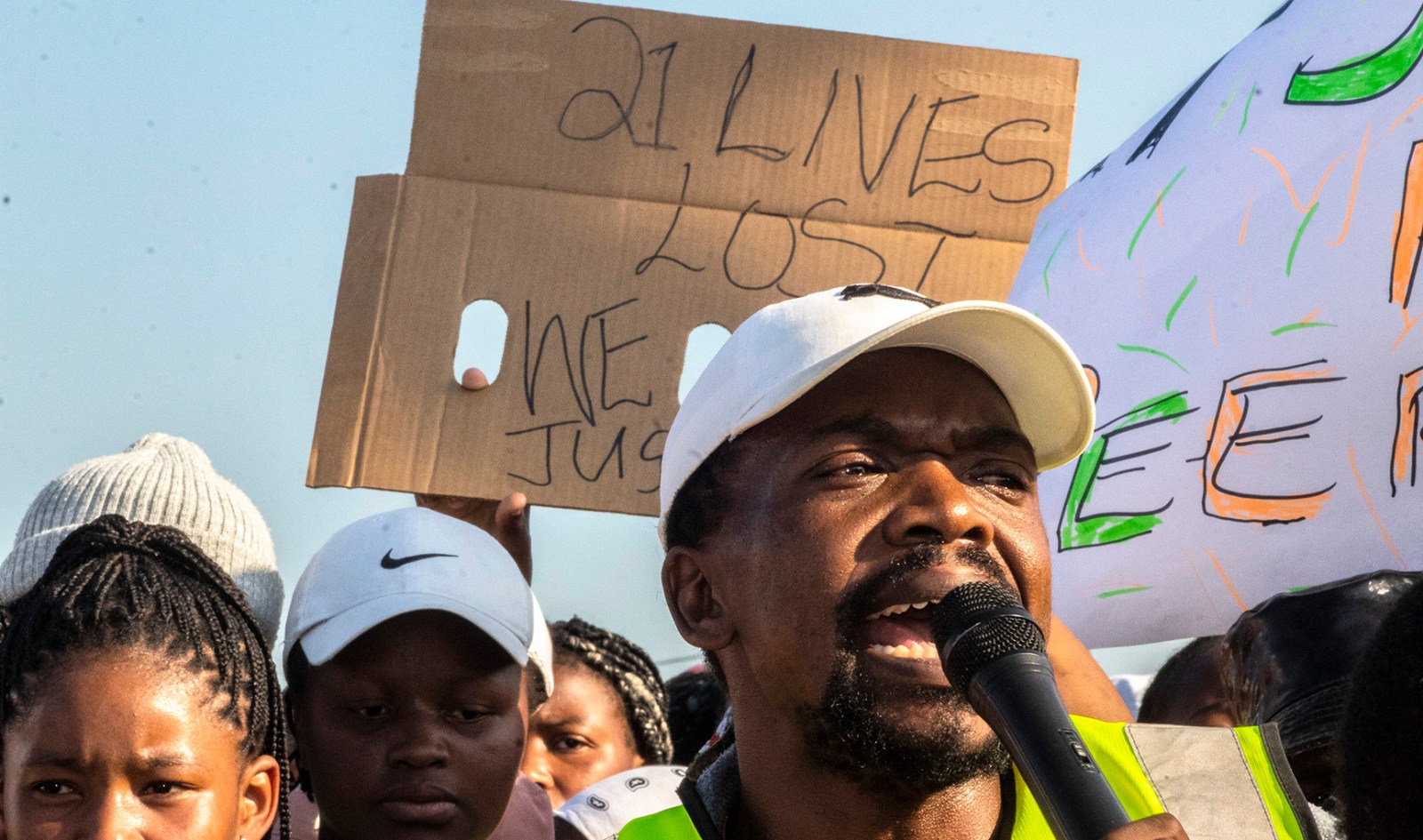 While some of the families of the youngsters who died in the Enyobeni Tavern tragedy on 26 June welcomed the arrest of the tavern manager and two employees for contravening the Liquor Act, they say they are still in agony over the failure of the police to find out how their children died.

Relatives of some of the 21 youngsters who died at the Enyobeni Tavern in Scenery Park on 26 June are angry that they were not told of the arrest earlier this week of the manager of the establishment on charges of selling liquor to minors.

Police spokesperson Brigadier Tembinkosi Kinana confirmed late on Wednesday that they had arrested the husband of the owner. He apparently managed the tavern.

The manager was on the scene when the deaths of 21 young people were discovered. The other two people who were arrested are employees at the tavern. All have been released. The manager is due to appear in court on 19 August.

The families said their grief and anger was compounded by the continued silence from authorities on what had killed their children. The teenagers died at the tavern while celebrating the end of exams.

The families said they heard in the media that the owner of Enyobeni tavern had been arrested.

“When President Cyril Ramaphosa was here, he promised us that they are going to work with us as families… but now we are hearing from the media that the suspects are arrested,” said Xolile Malangeni, father of one of the victims, 17-year-old Esinako Sanarhana.

Malangeni said he welcomed the arrests, but that police were supposed to inform the families before going public.

“It’s a shame that our police and government are still waiting for the cause of death, but all of a sudden we are hearing from the media that the owner is arrested without the police informing us first.

“This is a serious and painful issue… My wife and children are still grieving until today, and we were all surprised when we heard this from journalists… this wound will not heal soon.”

Malangeni said that burying a child without knowing the cause of death was one of the most painful things to do.

“We are all still in pain… imagine losing a child in that manner and you bury your daughter without knowing what killed your child.”

Phumla Bekiso, the mother of 17-year-old Lungile Bekiso, broke down while talking about the unexplained death of their son.

She said she had also heard on the radio about the owner’s arrest. While the family welcomed this, she said this would not bring back her child.

“Losing a child is a trauma on its own and police have taken a long time to arrest the suspects in this tragedy. My question is, why were they given bail?”

The police did not respond to a request to clear up confusion around a statement saying that the owner (later identified as the manager) had been issued with a summons to appear in court. No mention was made of bail for the manager or the two employees who were also arrested.

“What is painful is that we are still waiting for forensic results. I want to know what happened to my child,” Bekiso said.

Liquor Traders Association convener Lucky Ntimane says the arrests of the tavern manager and two others are nothing to be celebrated.

“The charge seems to stem from the contravention of the liquor licence regulation, which does not carry much [of a penalty]. We don’t expect much to happen in that regard,” he said.

Ntimane said the first thing they wanted to understand is what happened to the kids.

“We believe there is a much bigger case that the owner and those involved need to answer to.”

In a speech during a memorial service for the victims, he distanced the organisation from the owners of the tavern, criticising them for selling alcohol to a 13-year-old child (the age of the youngest victim).

“Part of what we want to know is what will guarantee a successful prosecution of the owner of the tavern when the results of the autopsies are released,” he said.

Sokomani said the fact that the arrests were the result of the Liquor Board taking action showed that as far as the police investigation was concerned, they had found nothing on which to prosecute the owner of the tavern or anyone else for the deaths of the 21 youngsters.

Police say they are still waiting for the results of forensics tests to ascertain the cause of the deaths. Spokesperson Tembinkosi Kinana said a team of detectives was working on the case.

He said the arrest of the 52-year-old suspect and two employees came after the Eastern Cape Liquor Board laid charges at the Scenery Park police station for contravention of the Liquor Act.

The Liquor Board laid the charges a few days after the tragedy.

“After the opening of the case by the Liquor Board, the investigators embarked on the investigation process. This resulted in fines to the amount of R2,000 being issued to each of the two tavern employees, while a summons was served on the owner to appear in the East London Magistrates’ Court on 19 August.

“SAPS management has reaffirmed its commitment in ensuring that all the investigations around the Scenery Park tragic incident are conducted in [a] more professional and well-organised manner for a successful prosecution and subsequent conviction in the court of law,” he said.

“Just as we said in the beginning, investigation is a process and needs to be treated with extreme care and wisdom so that we can achieve the desired outcomes which all of us will be proud of,” Mene said.

The arrests come as the MEC for Finance in the province, Mlungisi Mvoko — whose department also handles the issuing of liquor licences — admitted that there was “a great need to improve human resources to effectively enforce compliance (by liquor outlets).

“We have 16 liquor inspectors to monitor more than 7,500 liquor outlets in the province,” he said.

Mvoko said provincial liquor laws did not limit the number of liquor outlets that could be licenced in the province.

“Issuing of licences is guided by the law and certainly not motivated by revenue collection… The number of taverns in some areas may be very high. The difficulty we have is in striking a balance.

“How do you not approve licences for taverns and still avoid an increase in illegal shebeens?” he said.

Dr Mgwebi Msiya from the Eastern Cape Liquor Board said they welcomed news of the arrests.

“We are looking forward to a successful prosecution. We hope this will serve as a strong warning to other liquor traders in the province that failure to comply with the trading conditions will have consequences.” DM/MC