Government promises arrests over Enyobeni, but still no... 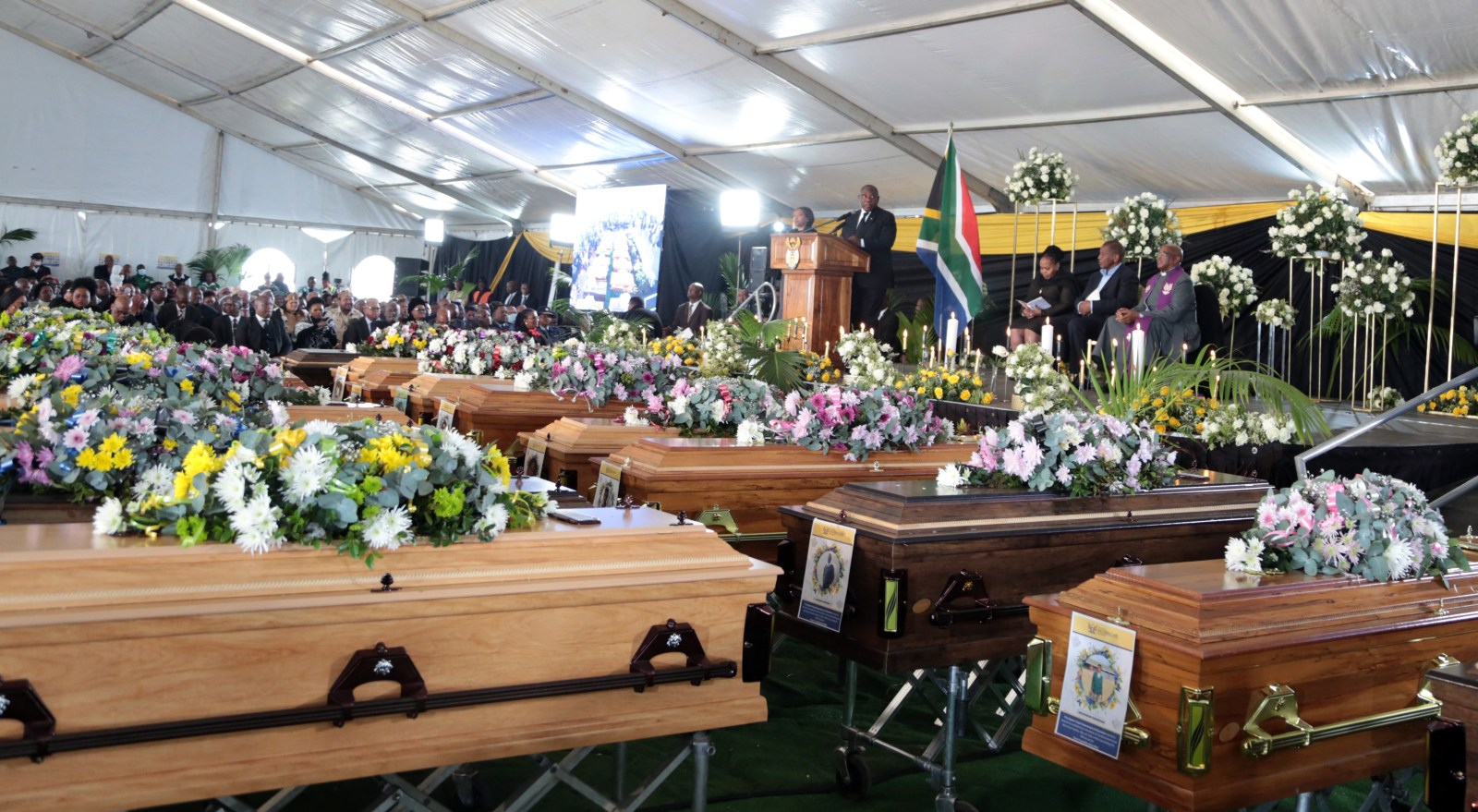 President Cyril Ramaphosa speaks at the mass funeral on 6 July 2022 of teenagers who lost their lives at Enyobeni tavern in Scenery Park outside East London. (Photo: Felix Dlangamandla / Daily Maverick)

Police Minister Bheki Cele promised on Wednesday that arrests would follow after 21 teenagers died at an East London tavern on 26 June. On Sunday, bereaved families gathered outside the Enyobeni tavern to mourn the loss of their loved ones.

The Liquor Traders Association of South Africa has slammed the owners of the Enyobeni tavern in East London’s Scenery Park, saying the deaths of 21 teenagers were completely unacceptable.

Association convener Lucky Ntimane said Enyobeni tavern was a noncompliant outlet that failed to take into consideration the wellbeing of the local community.

“We don’t associate with any liquor trader who doesn’t comply with licence regulations. What we have learnt from the incident is that compliance is more important than a need to make an extra buck at the expense of our people,” said Ntimane.

He was speaking after a mass funeral was held at the Scenery Park Sport Stadium in East London on Wednesday. The funeral was attended by several dignitaries including President Cyril Ramaphosa and Eastern Cape Premier Oscar Mabuyane.

The cause of the deaths is still being investigated.

Footage on social media showed hundreds of young people partying through the night at the tavern on 26 June. Festivities came to a tragic end in the early hours of the morning. The youngest victim was just 13 years old.

Dr Litha Matiwane from the Eastern Cape Department of Health said on Wednesday they were still testing samples that had been sent to Cape Town for forensic analysis. Clothes worn by the victims were also sent for testing.

Ntimane said tavern owners who did not comply with regulations ought to lose their licences outright.

“Taverns are part of a township ecosystem and one can’t divorce taverns and townships… Enyobeni highlights a need for liquor traders and communities to work together for the better of society.”

Ntimane said the problem of underage drinking was widespread and not limited to township liquor traders who operated taverns.

“In our townships we have a lot of retailers who sell alcohol that’s much more affordable compared to taverns, and those places are susceptible to selling cheap alcohol to minors. So, this is a much bigger problem than just taverns,” he said.

Ntimane said tavern owners had failed to play their part.

“We are willing to work with the government to contribute to improving our society, and we won’t allow our kids to die at the taverns.

“The time has come to take action,” he said.

Police Minister Bheki Cele told mourners that they would leave no stone unturned in finding the culprits.

“Somebody somewhere must answer. There are questions that are asked and are not answered. One of the questions is, who has been arrested? We formed a team consisting of the National Prosecuting Authority and the police with its mandate to investigate, and this is prosecution driven,” he said.

“Those with tavern businesses need to tell us if they want to take the lives of our children or if they want to make profit. The youth of Scenery Park has no alternative… we push them to go to taverns,” said Cele.

He said there would be a meeting with parents to discuss how best to move forward after the tragedy.

“The Liquor Board needs to be asked about what rules they give taverns when they are issuing licences. Also, we hear that the municipality has the powers to extend the operating hours of the taverns,” he said.

Cele said the deaths occurred between 2am and 4am on 26 June.

Eastern Cape Premier Oscar Mabuyane said, “It is not the time to blame each other, but to work together.”

He said the incident could have been avoided and that the provincial government would do whatever it took to prevent this happening again.

A few hours after the mass funeral, families of three of the victims visited Enyobeni tavern where they performed rituals to fetch the spirits of their children.

Thembinkosi Silwane was among the 21 teenagers who died in the tavern. His uncle, Mnikeli December, said they were very disappointed in how the government was dealing with the matter.

“We are here fetching his soul and we are burying him today at his birth place. There is no one arrested and we are very disappointed… we hope that soon they are going to tell us what caused this tragedy,” said December.

“How can the Liquor Board allow a tavern of this nature to operate in this space?” he asked.

Eastern Cape police spokesperson Brigadier Tembinkosi Kinana said no arrests had been made and that they were working with the NPA to investigate the incident. DM/MC