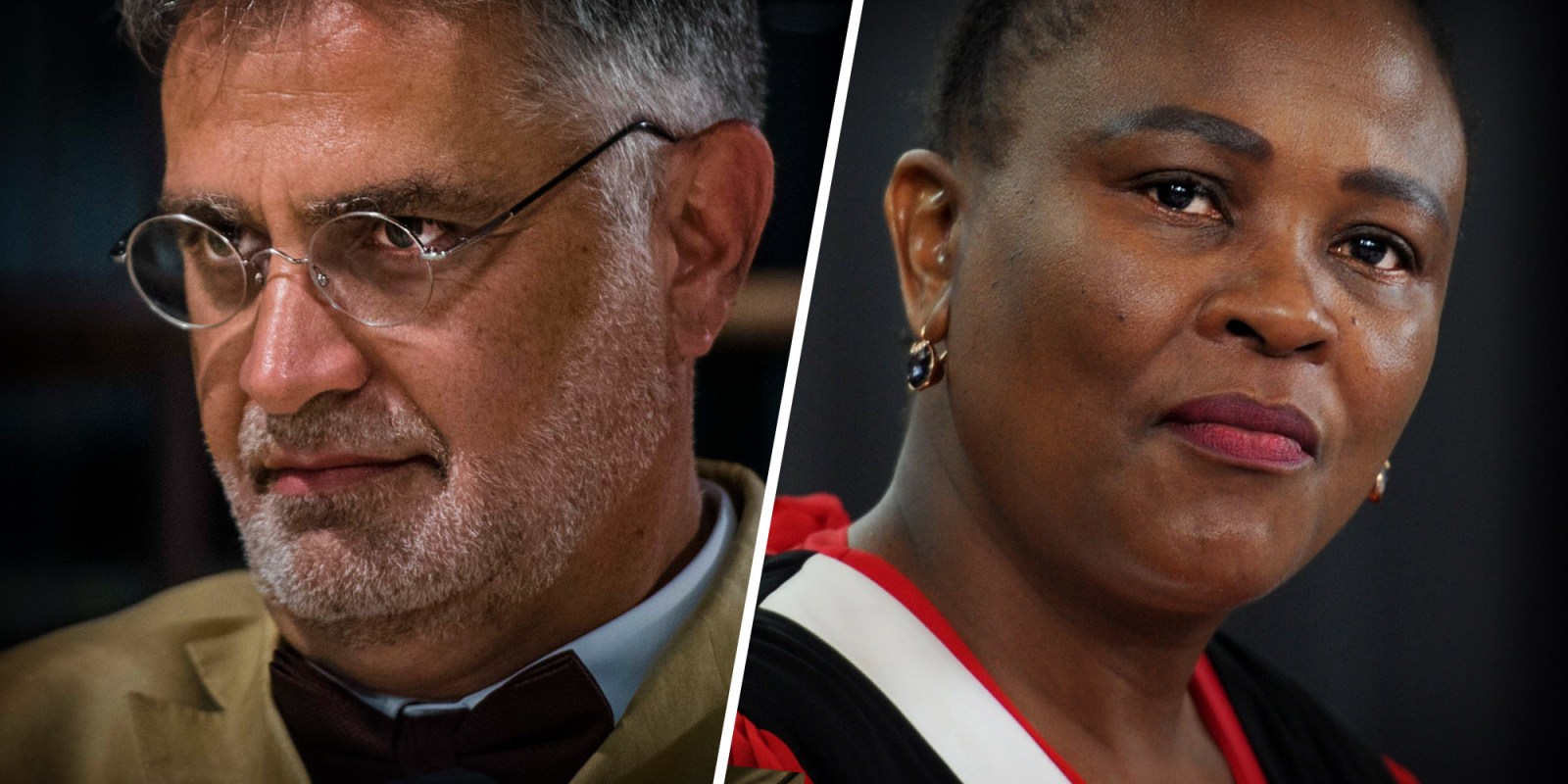 A recording of now suspended Public Protector Busisiwe Mkhwebane meeting the Office of the Inspector-General of Intelligence raised the lid a little further on the spooks and the South African Revenue Service’s so-called intelligence unit that hit the headlines in 2014.

In a recording played on Wednesday at the impeachment inquiry into suspended Public Protector Busisiwe Mkhwebane, it became clear that Mkhwebane got a report in October 2014 about the South African Revenue Service (SARS) intelligence unit from the then inspector-general for intelligence (IGI), the late Faith Radebe — despite having kept quiet about this, not only to the SARS officials she investigated, but also in court proceedings that ultimately set aside the Public Protector’s July 2019 report about SARS.

The recording not only shines a light on Mkhwebane’s conduct, but is also a glimpse into the turmoil stirred while politically pliant persons were appointed to high office in state and state-owned enterprises to facilitate State Capture. From 2014, SARS found itself at the sharp end of public noise about a so-called rogue unit — officially it was the high-risk investigation unit focused on high-earners’ tax compliance.

In an echo of the US Capitol Hill riot inquiry, now under way also with recordings and visuals, the recording of 31 January 2019 was played at Wednesday’s meeting of the parliamentary Section 194 impeachment inquiry. Mkhwebane is heard in that meeting with then IGI Setlhomamaru Dintwe and the Office of the IGI’s advocate Jay Govender, saying in reference to the October 2014 report: “We didn’t just want to rely on the report dropped in our reception…”

But for ex-SARS official Johann van Loggerenberg, it was a crucial point in a probe into the unit he had headed from February 2007, with at most 20 officials at its height before being left with six staff when it was disbanded in late 2014 by then SARS commissioner Tom Moyane, who subsequently emerged as key in the so-called breaking of SARS and was also recommended for perjury charges by the State Capture commission.

“I’m not just sitting here on my own behalf, but every South African affected by this… She [Mkhwebane] had no option — she had to contact me and get my side. She failed to do all of this,” Van Loggerenberg told MPs on Wednesday.

“I wasn’t heard once in this whole saga. I was disregarded as if I did not exist and was irrelevant.”

And that was the irony, he pointed out to the Section 194 impeachment inquiry now under way after almost two years of litigation by Mkhwebane claiming bias and unfairness.

“The Public Protector made findings that affect you and other people… without even having bothered to call you to hear you… It would be tantamount to this committee sitting without Ms Mkhwebane participating or her legal representative cross-examining me,” said Van Loggerenberg, after explaining his motivation to testify before the inquiry.

“As I sit before you as a whistle-blower, it’s been eight years of trauma. That’s my motivation.”

Or, as his sworn statement to the Section 194 committee said: “I submit this affidavit in the interests of justice and that of the South African public in pursuit of a better society for all.”

Van Loggerenberg had in 2016 approached the Public Protector as a whistle-blower, submitting “reams of documents” and shared cellphone and private email details. His lawyers continued to correspond with Mkhwebane as recently as three weeks before the report’s publication, because she referred to the SARS high-risk investigations unit as a “rogue unit” on various public platforms.

Yet the July 2019 report indicated Van Loggerenberg could not be issued with a subpoena because he was unable to be found.

“My residential details have remained the same since 2010 and were easily accessible… I can’t imagine Ms Mkhwebane not being able to find me… My attorneys corresponded, her attorneys responded… That was before the report was concluded.”

Mkhwebane exposed as having 2014 IGI report

The recording is central as it shows Mkhwebane had the IGI’s October 2014 report, but did not tell implicated persons about it or obtain their responses. Yet this report was important to the July 2019 Public Protector’s report on the SARS intelligence unit — published more than three years after the Sunday Times in April 2016 retracted a series of articles in line with the Press Ombud’s ruling.

It is that type of conduct that’s at the core of the impeachment inquiry on the grounds of misconduct and/or incompetence.

Claims of unfair treatment by Mkhwebane, bias and acting with “gross unreasonableness” have arisen in various court judgments. That includes what was called her “somewhat unrepentant alignment with one side of the public debate” in the first ruling of the invalidity of her June 2017 report on the Bankorp apartheid-era bailout that ordered Absa to repay R1.125-billion.

Mkhwebane failed to shake the personal cost order all the way to the Constitutional Court — and was sharply criticised for having failed to let the SA Reserve Bank, Absa and others know that she had several meetings with then president Jacob Zuma and the State Security Agency (SSA) before concluding the report.

The remedial action for Parliament’s justice committee chairperson to table so the SA Reserve Bank constitutional mandate could be amended was withdrawn by Mkhwebane during litigation in a concession that this was not how constitutional amendments are effected.

Similar descriptions of Mkhwebane’s conduct crop up in a series of judgments, in August 2019, when Judge Ronel Tolmay in the Estina report review said the Public Protector had failed to properly investigate and had shown “gross negligence”.

The recording played on Wednesday has lifted the lid a little further on how intelligence abuses played themselves out in the State Capture years — and the paralysis by classification and secrecy. That includes Parliament’s intelligence oversight entity, the Joint Standing Committee on Intelligence, about which the State Capture commission report is scathing.

The recorded conversations between Mkhwebane, Dintwe, Govender and others unidentified, played to MPs on Wednesday, ultimately are more about sleepers and intelligence equipment that “disappears” from the State Security Agency (SSA). Like the one piece of equipment that was missing, according to an unidentified male voice, but “no one is worried about it [and] after Nasrec it reappears” — seemingly a reference to the grabber, or interception equipment, deployed at the 2017 Nasrec ANC national elective conference. The State Capture commission also dealt with this, and it remains subject to court proceedings by ex-SAPS national commissioner Khehla Sitole, whom the Independent Police Investigative Directorate labelled as uncooperative in its probe.

And hits emerge also on the SSA’s disregard for accountability, even at the minimum administrative level. “We can ask for an asset register, and we don’t know what we will be getting,” says Govender in reference to the existence of three or more such SSA registers.

“What is crucial, a lot of the information sourced from SARS is not classified,” Govender says at one stage, adding the issue is that it is “a large part of the report”, which overall is classified.

While the Office of the IGI could disclose the report that would be redacted, only the SSA director-general could declassify the information, including the names of operatives and their data collection methods.

Dintwe and Govender repeatedly express their frustration at the wall they hit with various requests they made. Having asked for the recommendations and findings, but told these would not make sense without the report, according to the recording, Mkhwebane hauls out the stick of criminal proceedings in case they failed to cooperate.

But in 2019, in the noise around secrecy, a web of cross-suits had ensued, with Mkhwebane and then state security minister Dipuo Letsatsi-Duba counter-suing each other over the October 2014 report, which the next state security minister, Ayanda Dlodlo, in September 2019, approached the courts to keep secret.

Ultimately, a redacted version was handed over in November 2019 following a court agreement, four months after the Public Protector’s report on SARS matters.

And that was the point on day three of the Section 194 inquiry: no fairness or accountability in proceedings, an apparently predetermined outcome bias and no separation or independence from what Van Loggerenberg called “a complex orchestrated propaganda campaign” against SARS.