Junior Boks gear up for showdown with Wales in Summer S... 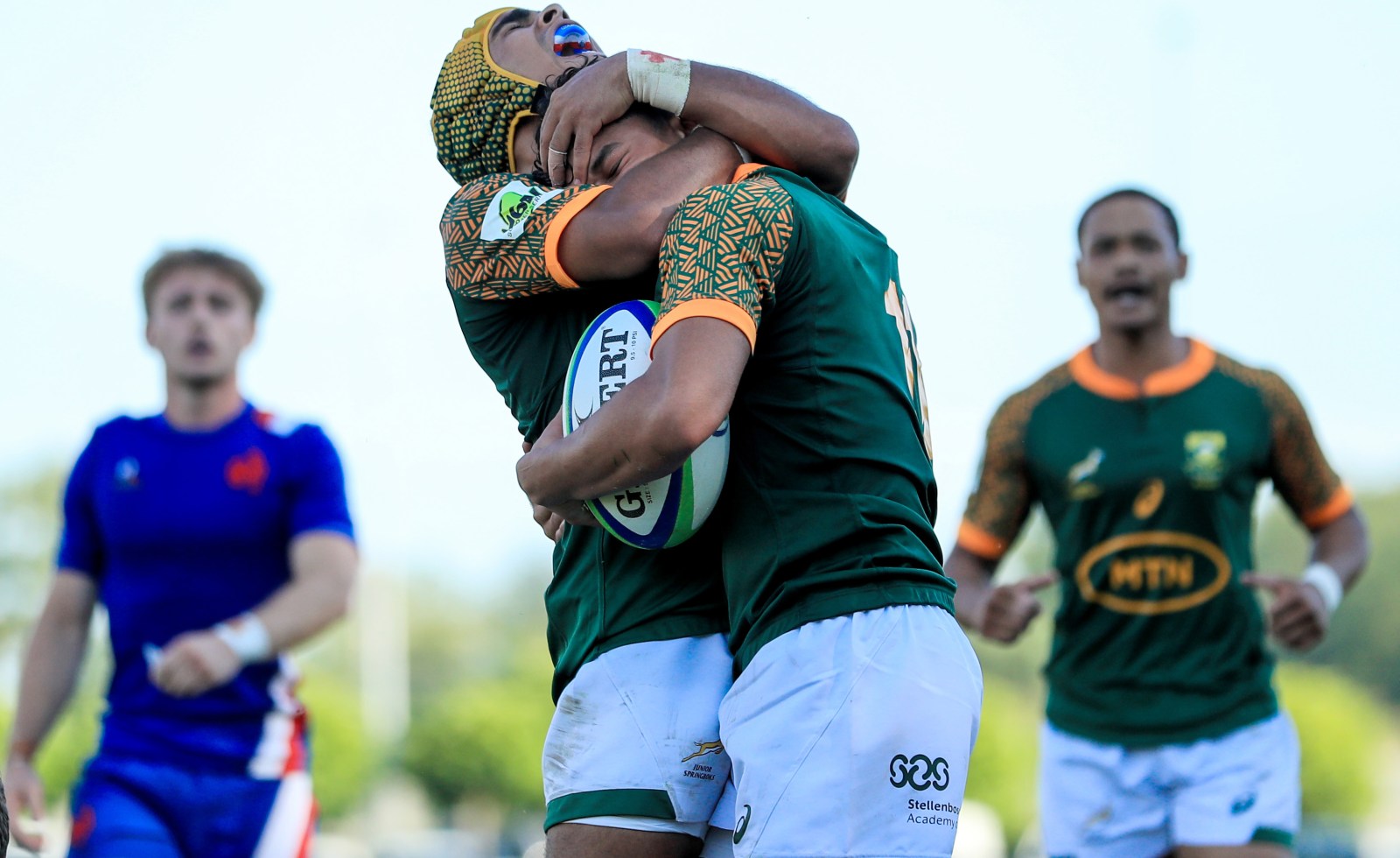 South Africa's Imad Khan celebrates after scoring a try against France with Ethan James during their Under 20 Six Nations Summer Series Round 3 Pool A match at Payanini Center, Verona on 5 July 2022. (Photo: Inpho/Ben Brady)

The Junior Springboks will take on Wales in Treviso, Italy on Tuesday evening in the final of the Six Nations Summer Series.

The Springboks under-20 team are unbeaten in Europe, having beaten England, Ireland and France in their pool A clashes. Wales — also unbeaten — have cruised past Scotland and Georgia before sneaking past the home team, Italy, 23-20 in Pool B to secure their place in the final.

In what is a serendipitous scene-setter to the deciding clash between the senior Springboks and Wales in Cape Town on Saturday, the two Junior versions have emerged as the best at the Under-20 competition in Italy.

“We know what they will bring — they have a formidable team, a good kicking game and serious pace out wide — so our defensive effort will have to be top-class on the day and we must take our opportunities on attack,” said Junior Boks head coach Bafana Nhleko about the Welsh junior side.

Wales demonstrated their composure under pressure in their thrilling victory over Italy.

“The way the Welsh dealt with the pressure in the face of such a huge onslaught from Italy, playing in front of their own fans in Treviso, was hugely impressive,” said Nhleko.

“It showed their character, and they will be a massive test for our boys. They’re a tactically astute team and have a senior Test international in their ranks, which demonstrates their pedigree.”

The Junior Boks started slowly in the series, however, their victories have become increasingly more convincing. They put England away 30-22 in an error-ridden display in their opening match.

They then showed their potential by blitzing 2022 Six Nations Under-20s Championship winners in the first half before ill-discipline and shoddy defence allowed the Irish back into the match in the second, eventually overcoming them 33-24.

The Junior Springboks proceeded to lash the highly-rated France under-20 team 42-27 in their final group game, to offer a sliver of what their best play could look like. However, outside centre and vice-captain Ethan James believes the best is yet to come for the Baby Boks.

“As a team, I think all of the guys in our age group did not have the opportunities in the last two years because of the Covid pandemic,” said James.

“It would mean so much to us as a group because we came together in April, we worked so hard, put in the hours in Stellenbosch and came here and to play the Six Nations sides who have already had a Six Nations tournament behind them.

“Although we’ve not played to our true potential, we will approach our training and mental preparation in much the same way as we’ve done for the other games. We will keep to our processes, and I believe it’s a matter of getting the detail right, so that we can up the intensity and be more accurate in the execution of the game plan,” he added.

Nhleko has made five changes to the team that thumped France for the final clash — four of them coming in the forward pack.

There is a new-look front row with props, Corné Lavanga, Corne Weilbach and hooker, Lukhanyo Vokozela all getting a start. They replace Lamla Nunu, Sebastian Lombard and Tiaan Lange, who were the starting front row trio against France.

The other change to the pack is due to an injury to the athletic Cameron Hanekom. The No 8 hurt his ankle against France and is replaced by Louw Nel, with Siya Ningiza and Gcino Mdletshe providing loose forward cover on the bench.

Merwe Olivier also comes onto the bench as lock cover alongside Corné Rahl.

Amongst the backs, scrumhalf Nico Steyn gets the starting nod in place of Neil le Roux as a rotational change.

“By the end of the tournament we would have played four very physical matches inside the space of three weeks and we have worked to a plan to rotate the squad so we could manage the load of the players throughout the Series, as well as give all players an opportunity to play,” said Nhleko.

“While we’ve managed to win three games, there is a feeling within the group that we have not played to our true potential,” added the coach

“We have prepared well and are looking forward to the game. The boys are in a good space and they see this game as another opportunity for an improved performance.” DM

The Junior Springboks team to face Wales in Treviso: