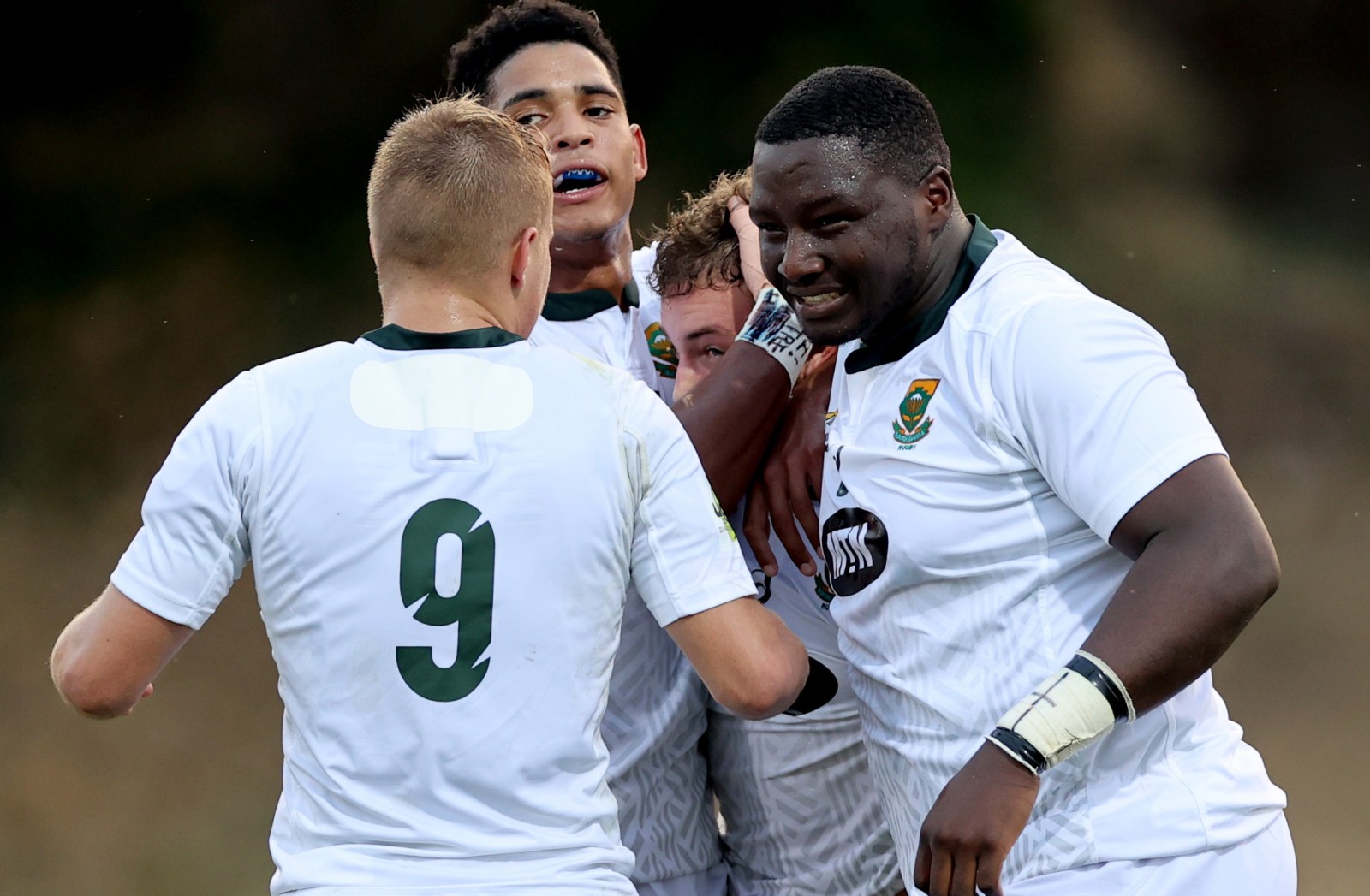 Nico Steyn, Sacha Mngomezulu and Sivuyise Mabece celebrate with try scorer Tiaan Lange during their clash with Ireland at the Under-20 Six Nations Summer Series at the Payanini Centre in Verona, Italy on 29 June 2022. (Photo: James Crombie)

The Junior Boks won all three pool matches at the Six Nations Summers Series, with victories over England, Ireland and France.

South Africa assistant coach Chean Roux heaped praise on the Junior Springboks after a 42-27 win over France put them one game away from achieving their goal of recording an unbeaten Under-20 Six Nations Summer Series.

Not content with merely winning the competition, the Junior Boks set out to win all four of their fixtures and Roux was delighted with the way his side navigated a tricky test against France.

They will play either Wales or Italy in the first-place playoff, depending on who wins their contest in Treviso on Wednesday, and Roux admitted he would relish the chance to face the hosts.

“It would be great to play Italy, it’s the home country, I think there’s going to be a crowd,” he said. “We’re good friends with the Welsh boys, but it would be fun to play against the home crowd.”

South Africa led by just five points at the break and conceded a penalty immediately after the interval as their unbeaten record soon looked under threat.

But three second-half scores sealed what turned out to be a convincing victory and Roux was delighted with how his team dealt with a potentially nerve-wracking second half.

“These players haven’t played in the last two years, not even club or schoolboy rugby,” he explained. “Although there’s a lot of technical stuff at this age they need to get right, I think game management is the overall thing that we worked hard on.

“There’s still a lot of stuff that we need to work on, but I think they were calm and knew what they wanted to do, and accumulated points with scoreboard pressure.

“When we had to score and got in their 22, they converted that. They did brilliantly, well done to them.”

A story of South Africa’s summer so far has been the dominance of their pack. All five tries against Ireland came from the forwards and they were just as potent on Tuesday in Verona, as flanker Ruan Venter scored twice and substitute hooker Lukhanyo Vokozela crossed for his second try of the championship.

“I think the forwards worked their asses off, they were grinding it out at the end, especially in these conditions,” Roux added.

Junior Bok skipper and flyhalf Sacha Mngomezulu had an outstanding game with his ball distribution and kicking. He delivered a flawless kicking display by succeeding with four conversions and three penalty goals for a personal contribution of 17 points.

The only blemish in a very good South African display was the yellow card for front-ranker Juann Else, while influential No 8 Cameron Hanekom had to leave the field early because of an injury, with Louw Nel taking over his duties at the back of the scrum.

The French played some enterprising rugby, but they were made to work hard to keep the South Africans at bay, who used their set piece and kicking game to good effect.

“I felt we made it hard for ourselves in the first half because we didn’t take our opportunities and didn’t manage the game on our terms – that took energy away from us,” he said. “Once we stuck to our processes I thought the boys did well, and there was character and composure in the second half.”

Regarding another winning display against a quality opponent, Nhleko added: “We need to grow in our game management. I would also like to thank our strength and conditioning and medical departments for their work because the conditions (the heat and humidity) are tough, but our players were able to come through very well.

“The bodies are sore after three weeks so we will give them two days off to recover and then we will regroup to make sure our details are there and that we are up for the next physical challenge.” DM