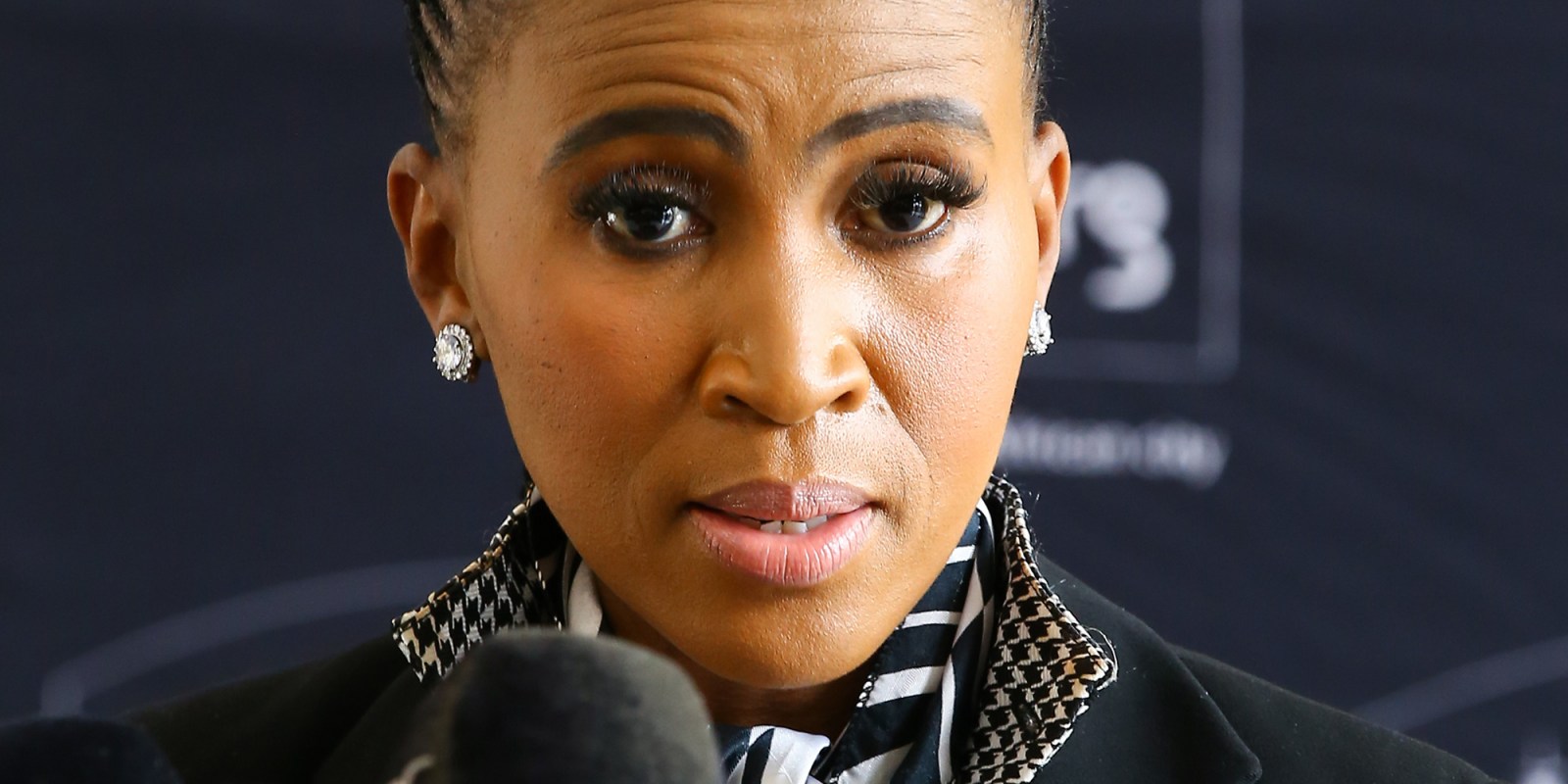 Johannesburg mayor Mpho Phalatse pictured on 13 December 2021, while announcing the councillors who will serve on the metro's Mayoral Committee. (Photo: Gallo Images/Luba Lesolle)

A formal complaint has been laid against executive mayor Mpho Phalatse, for allegedly subverting evidence against the former head of the anti-corruption unit Shadrack Sibiya’s unlawful acquisition of counter-intelligence instruments.

In a 10-page report, executive head in the office of the city manager in Johannesburg, Mesuli Mlandu sets out how mayor Mpho Phalatse had shielded the city’s former group head of forensic and investigation services (GFIS) Shadrack Sibiya from being held accountable for flouting processes in his acquisition of counter-intelligence instruments.

Sibiya, the former head of the SAPS Directorate for Priority Crime Investigation (Hawks) in Gauteng, was initially appointed as head of the city’s internal anti-corruption unit in 2016, before being promoted to group head of forensic and investigation services. He resigned last month to rejoin SAPS.

Mlandu claims that Phalatse used “every trick in the book” to prevent acting city manager Floyd Brink from discovering that Sibiya had no authorisation from the Minister in the Presidency responsible for State Security, Mondli Gungubele, to purchase the counter-intelligence equipment. Her actions are said to have hindered Brink from fulfilling his duties in terms of s32 (4) of the Municipal Finance Management Act (MFMA).

Phalatse is accused of trying to neutralise the evidence against Sibiya which enabled him to leave the city without facing civil, criminal and disciplinary action.

The complaint states that Phalatse failed to take steps against Sibiya despite the letter from Gungubele confirming that he was not authorised to acquire the instruments.

“Her failure to report the alleged conduct of Sibiya to the SAPS as advised by the office of the Inspector-General of Intelligence then resulted in the concealment of a possible offence in terms of section 26 of the Intelligence Services Act,” Mlandu said in the complaint. (Read in Daily Maverick: ActionSA Joburg councillor Nkululeko Mbundu in hot water…)

In March, an investigation by city attorneys, Tshiqi Zebediela Attorneys found Sibiya’s appointment was irregular and unlawful. They recommended it be rescinded, as it was in contravention of the city’s talent acquisition policy framework.

The report found Sibiya had procured instruments to conduct counter-intelligence operations, which were obtained with no authorisation from the State Security Agency (SSA), in contravention of applicable legislation.

Mlandu was the executive who first came across evidence of Sibiya’s unlawful conversion from unit head to head of department. Brink then asked him to inform Phalatse – however, the mayor is said to have done nothing about it until the Al Jama-ah political party lodged a formal complaint with the council last year to review his appointment.

After the scathing report was released, Brink withdrew Sibiya’s delegation of authority, which was challenged by Phalatse when she first sought a legal opinion on the matter from Webber Wentzel.

😶 | Does @mphophalatse1 have a secret?

A report found that Former General Shadrack Sibiya, set up counter-intelligence functions in her city and irregularly spent R8 million on unvetted equipment.

Phalatse is said to have issued a “threatening” letter to Brink, demanding the reinstatement of Sibiya’s authority, despite the latter’s failure to provide the requisite ministerial authorisation to prove he was indeed allowed to purchase the instruments.

In the letter to Brink on 15 April 2022, Phalatse said she should have been consulted before the decision was made about Sibiya. She called Brink’s conduct “irregular and demonstrates a serious misunderstanding” of his role as a city manager and accounting officer.

“We wish to express our severe displeasure at your actions to launch an investigation and the withdrawal of delegations to the head of GFIS without consulting us. We therefore call upon you to reinstate the delegation as a matter of urgency,” Phalatse said.

The mayor is said to have protested again when Brink decided to write to then Inspector-General of Intelligence Setlhomamaru Dintwe, who suggested Sibiya be criminally charged for his conduct.

In a dramatic turn of events, the former boss of the Gauteng Hawks, Major General Shadrack Sibiya, has resigned as the group head of forensic and investigating services in the City of Joburg, with his future well secured in the SA Police Service (SAPS) https://t.co/6tVli81Yqa. pic.twitter.com/prNQWZCPTP

“He [Brink] has indicated various ways in which the city is alleged to be vulnerable to acts of espionage, fraud, corruption, and maladministration. This is surprising since we understand that the SSA has provided manuals and training to GFIS for the use of the equipment which is only used for forensic and counter-surveillance purposes,” she said.

In May, Dintwe responded, saying Sibiya had to follow the correct procedures when acquiring the equipment. The letter states preliminary inspections had shown that the SSA had not conducted any tests or analysis of the equipment’s capabilities. He requested that the city provide a report, receipts from suppliers and the names of employees trained to use the equipment, among other things.

The Inspector-General of Intelligence’s office then sent another letter, advising Brink to lay a complaint with the SSA and to report the matter to the police. Another letter was sent to Phalatse informing her of the recommendations to Brink. Still, she failed to take action against Sibiya.

On 2 June 2022, a letter signed by Gungubele noted that the SSA had not conducted any tests or analysis on the equipment’s capabilities and that no training on Technical Surveillance Countermeasures software equipment was offered to the City of Joburg.

Phalatse has responded to the allegations through spokesperson Mabine Seabe, saying she has always acted within the bounds of the law. She called the claims against her “wild and unsubstantiated”.

“At no point has the executive mayor Phalatse subverted incriminating evidence in order to protect the former commissioner of the City’s Group Forensic and Investigative Services [GFIS]. In fact, the executive mayor has only sought to bring stability to GFIS, which has faced sustained attacks for the important work it does, mandated by council, of fighting corruption and maintaining the security of the City, its residents, and assets,” she said.

“Furthermore, the Speaker of council, councillor Vasco da Gama has responded to the report, and advised the executive head of the city manager’s office about the relevant procedures should he have a substantive allegation against any member of the council,” he said. DM