No SAPS protection at Phala Phala until after forex the... 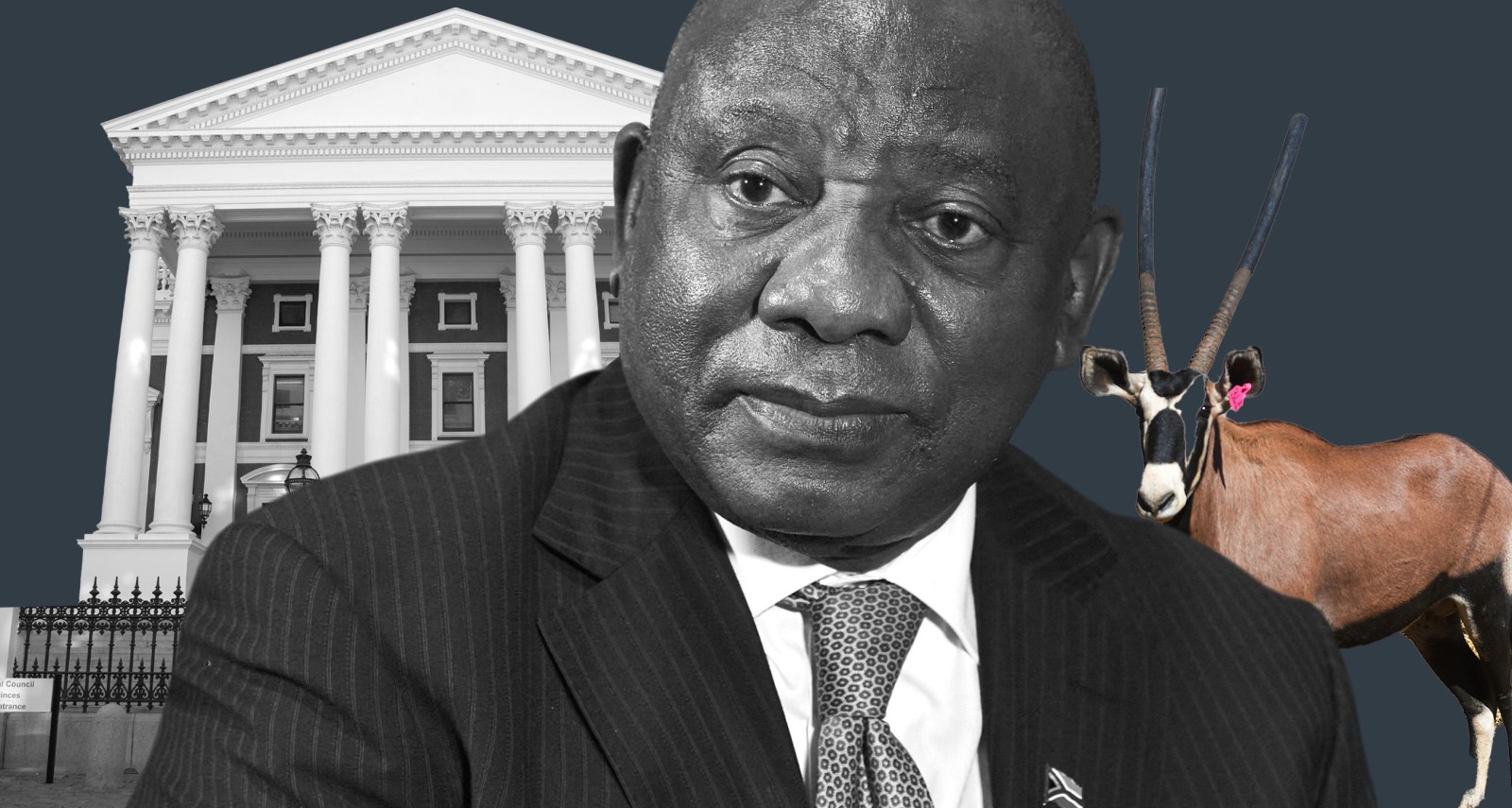 Illustrative image // President Cyril Ramaphosa. (Photo: Waldo Swiegers / Bloomberg via Getty Images) | The sale of game, including the red oryx, has been at the centre of the robbery at the President’s Phala Phala wildlife farm in Limpopo. (Photo: Supplied)

President Cyril Ramaphosa’s Limpopo farm was not under police protection at the time of the 2020 sofa cushion forex theft. Thus the security breach — the theft wasn’t reported to the local charge office — didn’t make the 2019/20 SAPS annual report, according to a parliamentary reply.

But the failure to provide security at the farm until the end of 2020 raises further questions about the SAPS doing its job – and that includes the protection of private and official homes of presidents, their deputies and spouses, according to the Presidential Handbook.

In early June Daily Maverick reported how the forex farm saga did not appear in the 2019/20 SAPS annual report that stated, “No security breaches occurred during protection duties”.

The February 2020 break-in and theft of reportedly $4-million of which only the presidential bodyguard’s boss was informed, according to ex-spooks boss Arthur Fraser’s affidavit to police on 1 June 2022, should have been listed in that 2019/20 SAPS annual report. These departmental documents are key oversight tools for Parliament, outlining not only spending but crucially also performance against targets and indicators. Protecting VIPs like the President both in transit and in loco is such a mainstay performance indicator.

As it now turns out, the presidential farm in Limpopo wasn’t protected.

“The security breach was not reported in the SA Police Service annual report 2019/20 as the president’s farm in Phala Phala was not protected by SAPS presidential protection service. Phala Phala farm only became the responsibility of SAPS in late 2020…” said Police Minister Bheki Cele in his parliamentary reply dated 4 July 2022.

The SAPS takes “full responsibility for the protection and security of the president”, according to the Presidential Handbook that sets out entitlements for sitting and former presidents, their deputies and their spouses/partners.

Together with intelligence agencies, “regular and comprehensive security assessments” are done. And security and protection measures include, but are not limited to “static protection at all official and private residences and office accommodation”.

Such protection measures also include in-transit security and “static protection of aircraft”, the vetting of bodyguards, medical personnel and other staff, the screening service providers and regular reviews of ICT security systems.

“The cost of the provision, implementation and maintenance of physical security measures at official and private residences used during the term of the president and deputy president shall be carried by DPW (Department of Public Works) in terms of office of the relevant policies at DPW and government legislation and regulations, as advised by the intelligence agencies,” according to the Presidential Handbook dated November 2015.

The presidential Cape Town and Johannesburg homes are visibly guarded; anyone driving past in Cape Town can see that.

It remains unclear why President Cyril Ramaphosa’s Phala Phala farm, where he is understood to regularly spend time, failed to be included in the presidential protection set-up.

What is apparent, however, is that the SAPS not protecting Phala Phala until late 2020 stands at odds with the Presidential Handbook, which talks of both official and private residences, alongside the offices.

How this lack of protection also while Ramaphosa was deputy president from 2014 was allowed to continue should be the subject of further questions — and parliamentary oversight.

And such questions must be asked as costs for “the provision, implementation and maintenance of physical security measures at official and private residences” are determined by Public Works — but are carried by what the handbook calls the “National Security Services (NSS)”, effectively the SAPS, spooks and soldiers.

The so-called NSS also carries costs for “security personnel, communication security and information security”, while the SAPS specifically is responsible for procuring and maintaining the cars for the President, deputy president and their spouses together with the vehicles’ running costs, according to the Presidential Handbook.

No excuse exists for not knowing. The preface to that handbook officially in place since 2015 states,

“All public servants who provide services in terms of this handbook are expected to acquaint themselves thoroughly with the provisions contained herein.”

In his 10 June Budget Vote debate reply, Ramaphosa invoked “due process” as the reason why no details would be given.

“I will therefore not be responding to speculation, conjecture, allegations, or so-called revelations. These must be ventilated in the proper and appropriate forums. I repeat, the law must take its course,” said Ramaphosa then, citing the criminal complaint.

As the farm forex saga travelled with him to the recent G7 summit in Germany, presidential parliamentary replies that were published around the same time continued holding the line of keeping schtum.

“I am ready to cooperate with any investigations on this matter and will answer whatever questions the investigators ask of me. The law must be allowed to take its course and due process needs to be followed…” said Ramaphosa in response to five parliamentary questions from the EFF and DA.

On Tuesday, Cele in another parliamentary reply to Whitfield confirmed the Hawks were investigating “a criminal case related to a number of allegations” made by Fraser in his 1 June complaint.

But that’s as far as the details went.

“The systematic search for the truth shall dictate the path to follow,” said Cele in his parliamentary reply. DM