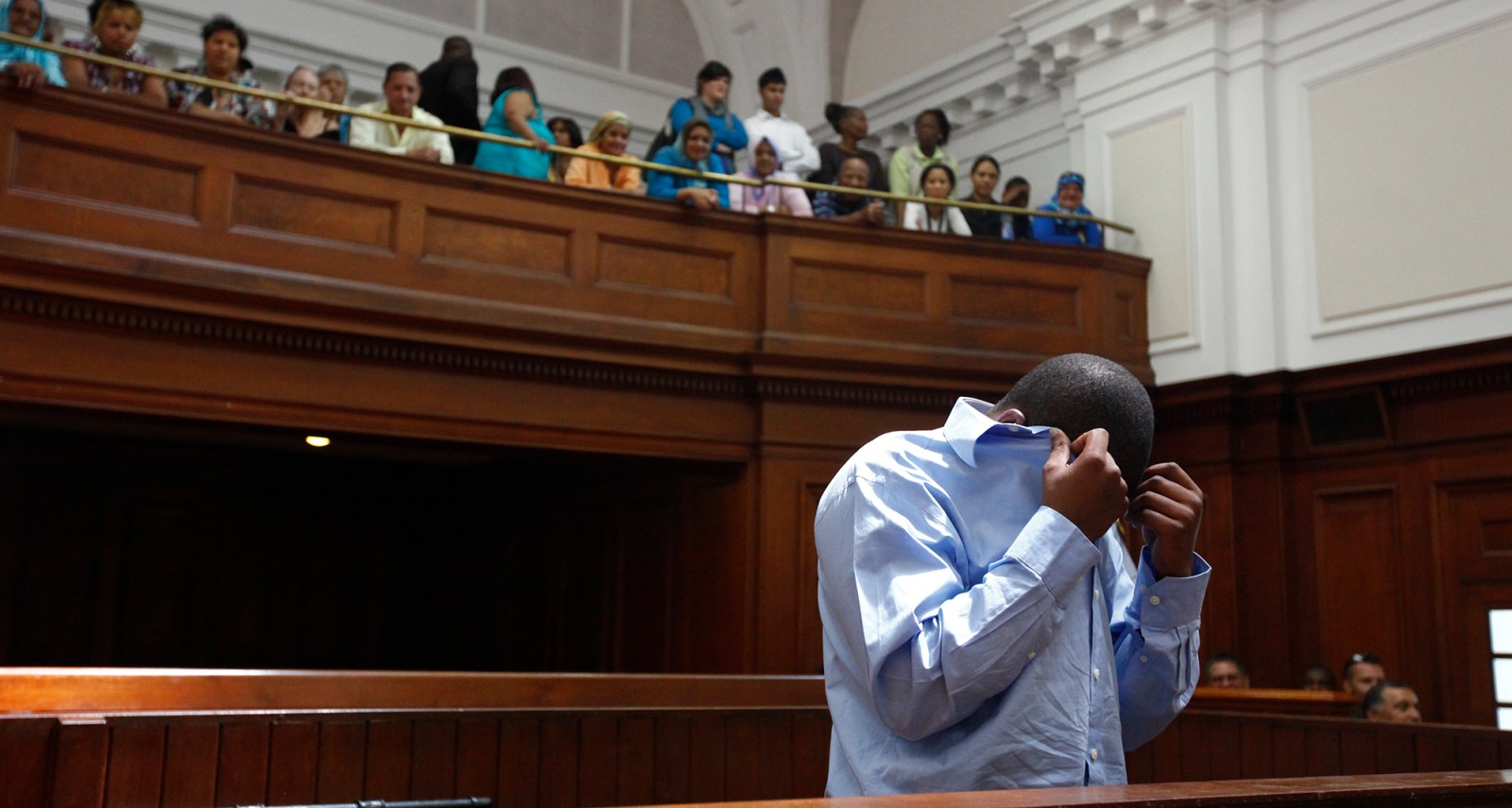 Zola Tongo (centre) covers his face as he attends a session at the Cape Town High Court on 7 December 2010. Shrien Dewani, husband of the murdered Anni Dewani, allegedly conspired with Tongo in the 2010 hijacking that claimed his wife Anni’s life in Gugulethu. (Photo: EPA / Nic Bothma)

‘It is a shame that [Zola] Tongo only served half of his sentence and was released on parole. Even worse is that he did not tell the truth about what really happened to my daughter,’ said Vinod Hindocha.

The release on parole of the taxi driver who helped organise the 2010 murder of Anni Dewani, née Hindocha, is not just a shame on the justice system, but also sends the wrong message, said Dewani’s father, Vinod Hindocha.

Anni and her husband, Shrien Dewani, a millionaire from Bristol, UK, came to South Africa in November 2010 on their honeymoon. She had only been in South Africa for six days when the hijacking and murder occurred in Gugulethu on the night of 13 November.

The following morning her body was found slumped in the back seat of a silver Volkswagen Sharan, opposite a vacant plot of land in Sinqolamthi Street, Ilitha Park, Khayelitsha. She had been shot in the neck.

Hindocha’s reaction follows the release on parole of Zola Tongo on Tuesday, 21 June.

Tongo’s parole is effective from 21 June 2022 until 6 June 2028, when his sentence will expire. He appeared before the parole board on Thursday, 16 June after parole had been denied to him in 2020.

He was sentenced in December 2014 to 18 years’ imprisonment after he pleaded guilty to kidnapping, robbery, murder and obstruction of justice.

Tongo’s version of his part in the murder was that he was only the taxi driver and jumped out of the car before the fatal shot was fired. Shrien Dewani was accused of orchestrating the murder. But Judge Jeanette Traverso dismissed the murder charge after the State was unable to prove its case.

The man who fired the fatal shot, Mziwamadoda Qwabe, is serving a sentence of 25 years, while co-accused Xolile Mngeni died in jail from cancer in October 2014.

Anni’s father said: “It is a shame that Tongo only served half of his sentence and was released on parole. Even worse is that he did not tell the truth about what really happened to my daughter.

“Tongo’s release on parole sends out a message that convicted criminals only need to serve half of the sentences handed out by the courts before they can be released.”

He added that the family would continue their quest for the truth.

The Correctional Supervision and Parole Board said Tongo had been released on parole after he displayed positive behaviour and completed rehabilitation programmes which included anger management, basic computer literacy and restorative justice.

Professor Lukas Muntingh, the head of Africa Criminal Justice Reform, said: “The court took into consideration what the minimum non-parole period is when it imposed the sentence. The parole board has a very specific function in the sense that it makes a decision based on how the person behaved in prison.

“The parole board looks at a whole range of factors and, importantly, a decision is made on how the person behaved in prison. The parole board is not an extension of the trial court. Punishment is the function of the court.

“The parole board releases him with certain conditions. If he commits further crimes [or] there are repeated violations of parole conditions then the department can revoke his parole.”

In terms of his parole conditions, Tongo will be monitored for 12 months, placed under house detention, and has to seek employment and undergo psychological treatment while on parole. He is also prohibited from leaving the district without permission from the Department of Correctional Services, is not allowed to use or trade in alcohol and drugs and must have random substance and drug tests. DM