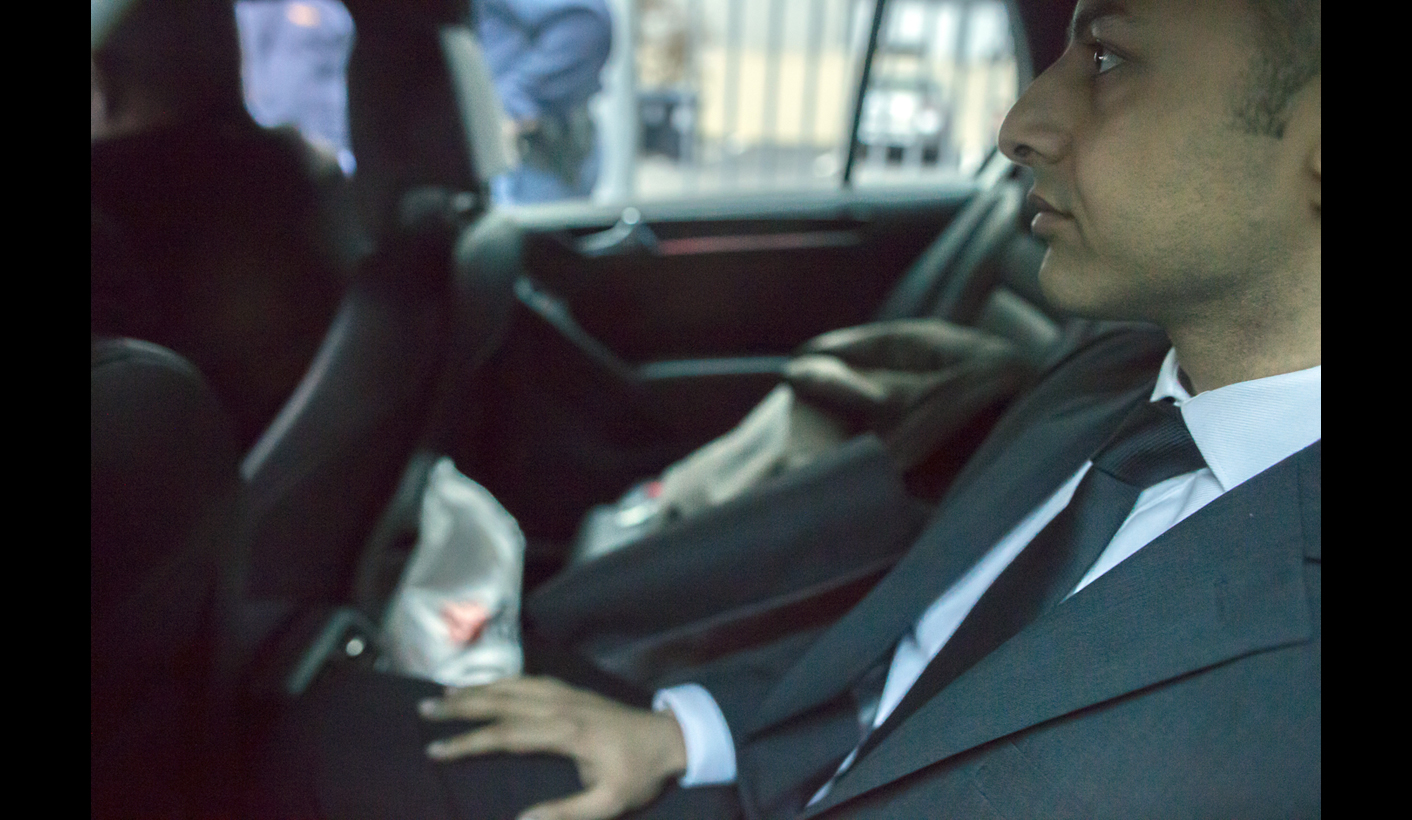 Murder accused Shrien Dewani appears to be a changed man after five months of confinement at a psychiatric facility in Cape Town where he was taken off medication and has been able to rest and exercise. At a pre-trial appearance in the Cape High Court yesterday Dewani was relaxed and focused as the defence and state legal teams finalised details before his trial which is due to kick off on 6 October. By MARIANNE THAMM.

There were more police than journalists in Court 2 yesterday as Shrien Dewani, accused of orchestrating the murder of his young wife Anni while the couple was honeymooning in Cape Town in November 201o, made a brief pre-trial appearance. There were also no chanting crowds outside the court or any of the spectators who usually pack the gallery.

Many of the international news teams dispatched to South Africa are currently ensconced in Pretoria where Oscar Pistorius, who pumped four bullets into Reeva Steenkamp, fatally wounding her on 14 February last year, is expected to learn his fate on Thursday.

Both cases involving men who have been implicated in the murder of their intimate partners have attracted international attention, with the Pistorius trial receiving rolling mass coverage. Dewani’s trial, which is expected to last two months, will certainly receive wide coverage in the UK, where the shocking killing dominated headlines after Anni’s brutal murder. It is unlikely that the Dewani proceedings will be televised live.

The Bristol-born Dewani, an accountant, and his Swedish wife Anni, an engineer, had only been in South Africa for six days when the hijacking and murder occurred in Gugulethu on the night of 13 November. The following morning Anni, still dressed in an elegant black cocktail dress, was found slumped in the back seat of a silver Volkswagen Sharan, abandoned opposite a then-vacant plot of land in Sinqolanthi Street, Ilitha Park, Khayelitsha. She had been shot in the neck, the bullet severing her spinal cord and rupturing several major blood vessels.

The story at first seemed to confirm the notion of South Africa as a violent country unsafe for tourists, but Dewani was later implicated after the arrest of three accomplices, including Zola Tongo, a driver Dewani had hired to show them around Cape Town. Tongo was sentenced in December 2010 to 18 years for his role in the killing, but in his plea bargain he said that Dewani had orchestrated the hijacking and had paid for the killing of his wife.

Dewani, who had already returned to his hometown of Bristol after the murder, was subsequently arrested and fought an almost three-year battle against his extradition to South Africa to stand trial for the murder. Yesterday the court heard that Tongo, as well as his accomplice, Mziwamadoda Qwabe, who was sentenced to 25 years in August 2012, would be appearing as state witnesses.

Advocate Francois van Zyl, SC, who is leading Dewani’s defence yesterday, requested Judge Robert Henny (who presided over the trial of Xolile Mngeni, the gunman who shot Anni and was jailed for life in 2012) to order that the Department of Correctional Services hand over certified copies of all documents pertaining to Tongo and Qwabe. These included records of visits by police, lawyers as well as entries in legal registers during both men’s periods of detention.

Tongo’s defence attorney, William da Grass, was subpoenaed to hand over all documents to the defence team, including his client’s phone records.

Da Grass, wearing a yellow shirt and tie and chewing gum, told Judge Henny that he no longer had any interest in the case and that he had not been able to take instructions from Tongo. Privilege, he said, was attached to Tongo and not himself, and he could not make the decision on Tongo’s behalf.

“There has been a misunderstanding here. I have ethical concerns. I have never been reluctant to had over the records but I don’t want to infringe on his [Tongo’s] constitutional rights,” Da Grass told Judge Henny.

Judge Henny, however, ruled that Da Grass must obtain phone records and hand these to Dewani’s defence team by Friday. The records would provide a detailed account of billing and not the content of conversations.

“Any relevant evidence becomes admissible. If evidence is relevant, the question of admissibility would be dealt with at the trial,” said Judge Henny.

The discussion yesterday with regard to phone records gives some indication of the possible direction of the defence’s case, in which it is likely that it will be argued that Dewani was somehow “set up” by Tongo and a middle man, Monde Mbolombo, a receptionist at the Protea Hotel Colloseum in Century City who recruited Qwabe and Mngeni. Mbolombo was granted indemnity for his truthful testimony in Dewani’s trial.

During Judge Henny’s sentencing of Mngeni in 2012 he said, “No direct evidence in this trial was presented about his [Dewani’s] involvement. This was based on hearsay evidence of Mbolombo and Qwabe as to what Tongo told them.”

However, on 6 October Dewani will finally have to deal with Tongo’s version of the tragic event and his [Dewani’s] alleged direct role in ordering the killing of his wife. Records of some 12 conversations between Dewani and Tongo on the day of the murder are bound to be central to the state’s case.

Dewani has some serious legal muscle on his side. Van Zyl – assisted by junior counsel Pieter Botha – is regarded as one of the best legal brains in the country and defended Shabir Shaik in his fraud and corruption trial. Cobus Steyl is the defence team’s ballistics expert and Professor Lorna Martin, head of the division of forensic pathology at UCT, is the team’s pathologist.

The state will be represented by Western Cape Director of Public Prosecutions Rodney de Kock, and assisted by advocates Adrian Mopp and Shareen Riley.

Yesterday, in marked contrast to his previous court appearances since his extradition in April this year, Dewani calmly stood in the dock and loudly responded, “Yes M’Lord, thank you,” when Judge Robert Henny asked whether he understood an order that he be readmitted to Valkenberg psychiatric hospital until 6 October, when his trial is due to start.

During several previous appearances Dewani appeared bewildered and excitable, flinching at the slightest noise in the court. His replies to previous presiding Judge John Hlope were barely audible and he fidgeted constantly.

Dr Shaun Baumann, senior specialist psychiatrist at Valkenberg, in a report handed to the court in June, set out that Dewani had been “calm and alert” on his initial arrival in spite of the diagnosis by a number of psychiatrists in the UK that he was suffering from major depressive order and post traumatic stress. At the time Dewani had been prescribed a twice-daily 150mg dose of the anticonvulsant, Pregablin.

However, said Baumann, Dewani’s confidant demeanour had diminished in the following weeks and he appeared more anxious “particularly during more formal interviews and at these times showed hypervigilant behaviour, flinching dramatically in response to routine the noises of a busy ward”. Dewani was, however, said Baumann, more relaxed when he was unaware that he was being observed. He was weaned off the medication as some of its side effects included irritability, anxiety and impaired concentration.

“A consensus developed amongst members of the multi-disciplinary team that Mr Dewani was not depressed. With regard to the diagnosis of post-traumatic stress disorder, it is acknowledged that Mr Dewani appears to meet the standard criteria for this diagnosis but it was considered that the context should be taken into account, in that the symptoms of anxiety could more probably be accounted for by his current predicament rather than past events. The avoidance displayed could be less an inability to recall past traumatic events than an understandable anxiety with regard to needing to appear in court to account for circumstances leading to him being charged with the murder of his wife.”

Since then Dewani has been photographed walking around the grounds of the Valkenberg Psychiatric Hospital in shorts, smiling and accompanied by staff.

Dewani is facing five counts: contravening section 18(2)(a) of the Riotous Assembly Act, kidnapping, robbery with aggravating circumstances, murder and obstructing the administration of justice.

Anni’s family is expected to arrive in Cape Town from Sweden on 4 October to face the last lap of an almost four-year ordeal since the killing. DM

Photo: British businessman Shrien Dewani is driven in police custody after appearing at the Western Cape High Court, Cape Town, South Africa, 09 September 2014. Shrien Dewani appeared at the Western Cape High Court for a pre trial hearing. The trial will begin 06 October 2014. Dewani has been charged for allegedly masterminding the murder of his wife Anni during a staged car-jacking on their 2010 honeymoon. EPA/NIC BOTHMA