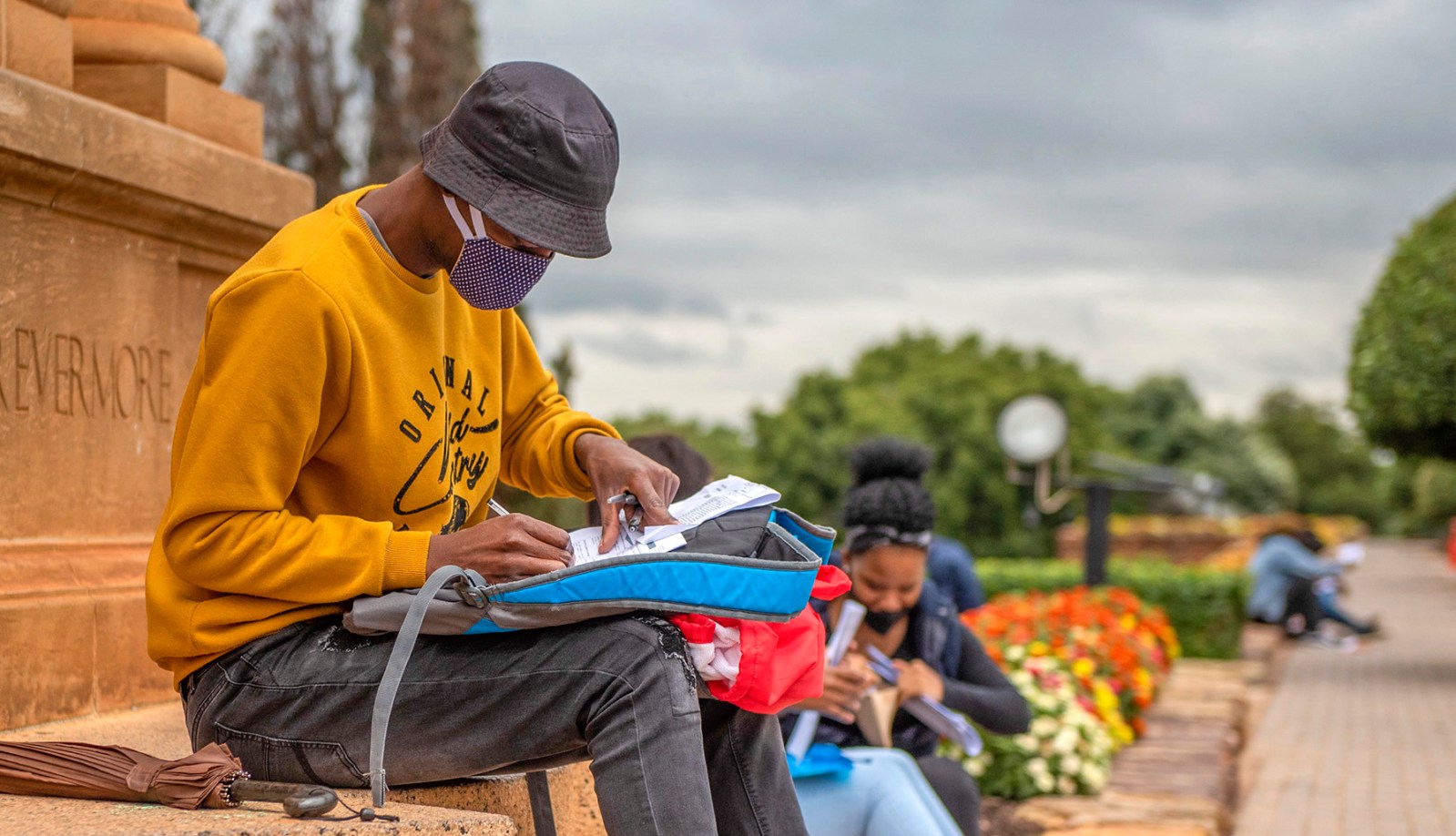 Unemployed graduates apply for internship vacancies advertised by the office of the Presidency at the Union Buildings in Pretoria, South Africa. Unemployment among the youth remains a challenge in South Africa. (Photo: Gallo Images/Alet Pretorius)

A Youth Capital report launched last month reveals the high financial and social costs of looking for work. It also highlights how job-seeking requires resources that many of the 9.2 million people aged 15 - 34 who are not in employment, education, or training do not have.

The report, titled Beyond the Cost: What Does it Really Cost Young People to Look for Work?, reveals that 84% of the 2,200 young people surveyed said they have to choose between spending money on buying food or looking for work and going for interviews.

“Employers don’t realise how much of a barrier costs are. They think we all have cars or it’s just one trip to come to the office for an interview, but what they don’t realise is that young people are applying at multiple places, so it’s multiple trips in a taxi to go for interviews that many of them will never get, and multiple trips to the police station to get things certified. Or when employers think ‘let’s do it online’, they don’t think that young people might not have a phone that’s capable of doing Zoom, and even if they have that, finding money for that gig of data might mean having to choose between a meal that day and that gig of data” explains Kristal Duncan-Williams, project lead at Youth Capital.

The report identifies similar trends to the Siyakha 2019 study which found that youth spend in excess of R900 per month on looking for work — costs that include printing and copying, transportation to interviews or locations in order to get documents certified, data, buying clothing to look presentable at interviews, calls, agency fees and application fees.

The 2022 Youth Capital report results reveal that four in ten respondents spend between R250 – R499 on transport, and an equivalent amount on data, while almost five in 10 (47%) spend up to R249 on printing and application fees per month. “People who aren’t in that situation don’t realise how dire it is,” says Duncan.

Covid-19’s impact on national employment figures has been significant, as data from Statistics South Africa and Nids-Cram show, with many South Africans being locked out of employment or losing their jobs, while not all of those who lost jobs were able to regain them. With so many South Africans, young and old, unemployed, the ability of young job seekers to find jobs is even further negatively affected. Most young people surveyed by Youth Capital found looking for jobs expensive and had to source the money to look for work from multiple sources. Sources included family members (69%), friends (20%), savings or earnings from previous work (36%), government grants (27%), money lenders and other sources (11%) or some combination of these. With increasing unemployment rates, sources like family and friends would be more difficult to draw upon, making it even more difficult for the youth to go out and search for work.

“The quotes from young people in our survey show that many young people didn’t look for work during Covid-19 because they felt that they just couldn’t ask anyone for money,” says Duncan.

Despite this dire situation, according to report launch panellist and financial journalist Duma Gqubule, the unemployment crisis, and the youth unemployment crisis in particular, is not on the agenda of the Presidency, Treasury, or the Reserve Bank.

“The most important thing you have to understand is the scale of the crisis. It is a humungous crisis” and it requires that government “do more than focusing on growing the economy,” says Gqubule.

The failure of the state and private sector to create sufficient employment opportunities, combined with the inability of youth to be able to afford the costs associated with looking and applying for work opportunities that do exist, goes some way to explaining the length of time many youths spend searching for employment. “When youth look for work it’s not simply linear — that they look for work all the time. Because it’s so expensive they look for work when they can afford to, so it’s on and off,” says Duncan.

Their survey revealed that four in 10 youth (44%) usually looked for work for more than a year before finding a job, with a further two in 10 (23%) looking for between six months and one year. Just a third said they looked for work for less than six months. This creates a cycle of unemployment because, according to Duncan, “CV gaps can be seen as red flags by employers. It’s a chicken and egg situation and so the sooner we get young people into jobs, the better.”

Employers can do this in a variety of ways, says Duncan.

“If employers started thinking about the hiring process a bit better, they might be more likely to find that right candidate because we are losing people along the way who have to make that choice between a meal that day and coming for an interview.” She provides simple examples like not inviting more candidates than you need to for an interview, using WhatsApp bots or artificial intelligence to conduct first-round interviews so that only those who stand a real chance are invited for in-person interviews. Furthermore, providing a meal or a meal voucher at interviews, providing an uber voucher or money for public transport, or conducting first-round interviews via Zoom, or Skype or WhatsApp and providing a data bundle to allow candidates to do this would all go a long way to making it easier for youth to look for work.

Another mechanism is cash transfers, which when combined with support and mentorship, have been shown to positively impact the ability of youth to look for work and find a job. “I’m a big supporter of the basic income grant,” said Gqubule, “a grant will address the cost of people searching for jobs” and a forthcoming study he’s involved in proposes various scenarios to implement this.

World Bank studies show that the youth are vital to South Africa’s economic recovery and that youth entrepreneurs are “one of the country’s best hopes of solving the jobs crisis”. Their research shows that if South Africa were to match the self-employment rate of its peer countries, it could potentially halve unemployment rates. But many youths simply do not have access to the economic and social capital required to start their own business, never mind the challenges they face in accessing data and the internet.

But the responsibility is not the sole ambit of the state. The private sector, particularly internet service providers can step in too. Six in 10 respondents surveyed said they’d used a zero-rated or data-free platform to apply for a job and three-quarters of these said that it made applying for a job easier. Two in 10 respondents had also used WhatsApp to apply for work. Zero-rating, or creating data-light platforms, is one way that government and the private sector can partner to make job-seeking platforms easier for the youth to access, “but it’s not a one size fits all” says Duncan. Opportunities need to be on those sites for the youth to find them, and youth need to be aware and able to access them from either their own phones or community centres like libraries and youth centres.

Job programmes that place youth in mentorship and training situations also have a positive impact, explained panellist Senzelwe Mthembu of the Centre for Social Development in Africa at the University of Johannesburg. Programmes that included soft skills and financial skills training had both been shown to have an impact. “These types of programmes positively impact the supply side, on the side of young people, but of course, the demand side — available jobs — must also be addressed” she added. “Things just continue to get worse and young people can no longer be an afterthought. It’s of critical importance that we figure out how to solve the issue of youth unemployment.”

With reports like these, it is imperative that the issue of youth unemployment is kept on the agenda, and that the complexities of this search for work are explored. For Duncan, it’s extremely important that we recognise that “youth are multidimensional people, they have lives that are happening around them and realities that affect their ability to show up. Understanding that is important to understanding why youth fall short, and to our ability to ensuring that they are able to eventually find employment.” DM/MC