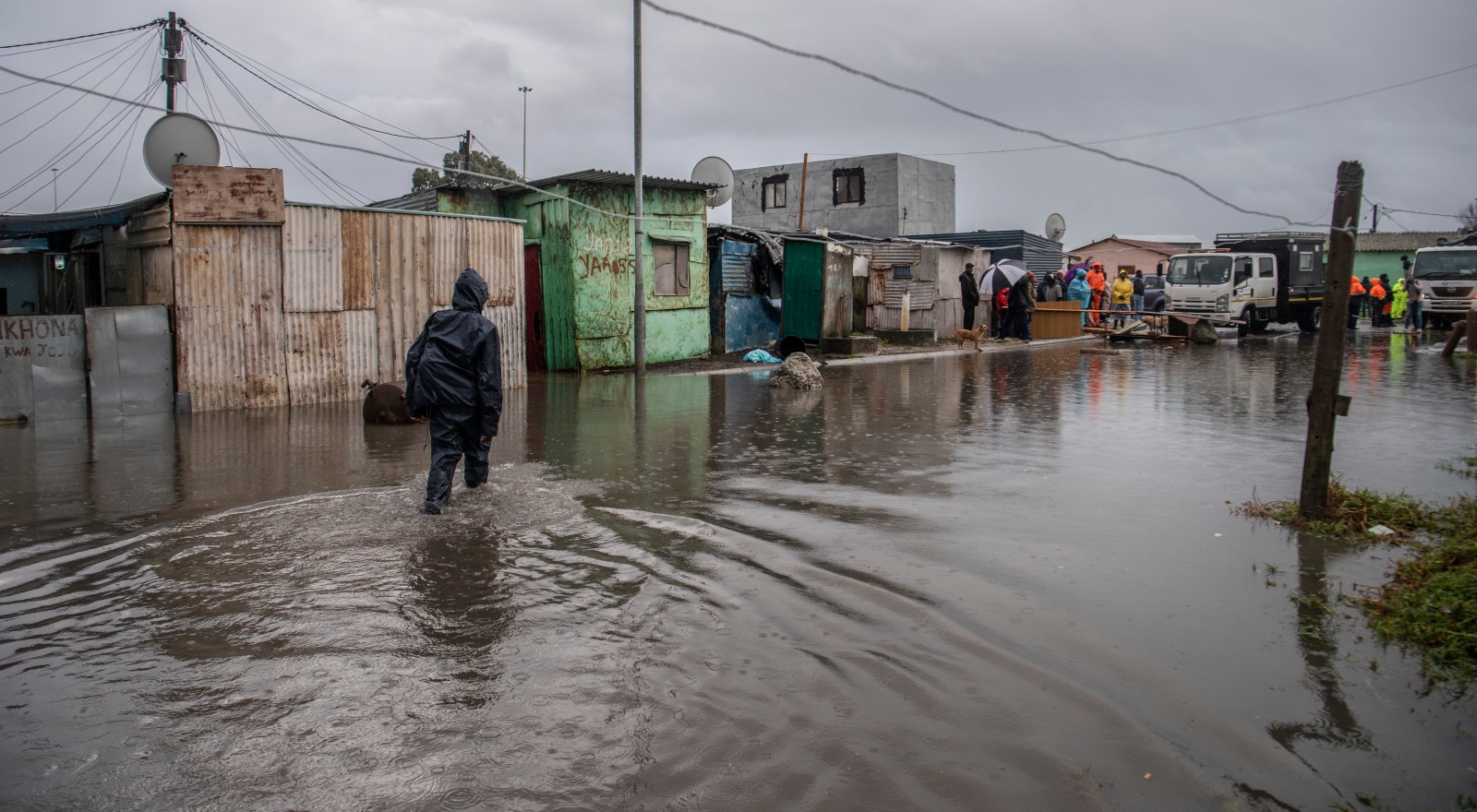 Homes in Site B Khayelitsha were flooded due to blocked drains. (Photo: Brenton Geach)

Ongoing rainfall has caused severe flooding and power outages in parts of the city. As relief efforts get underway across the metro on Tuesday, the cold and wet weather is expected to continue into Wednesday.

Flooded roads and power outages from heavy rainfall caused havoc in some areas of Cape Town on Tuesday, after a series of cold fronts hit the province.

There are a number of areas across the metro which are currently experiencing unplanned, weather-related outages, the City of Cape Town tweeted on Tuesday morning.

This is necessary maintenance work on our electrical infrastructure,” it said.

“The worst-affected areas are informal settlements in Khayelitsha, Ottery, Langa, Strand, Philippi, Gugulethu, Delft, and Vrygrond,” the city said in a statement early on Tuesday, TimesLive reported. “The city’s transport department is providing milling and sand where it is possible to do so, to raise floor levels.”

The Western Cape is experiencing a “series of cold fronts with an upper air trough, that have been dominating since Sunday evening,” senior forecaster at the Cape Town Weather Office, Elani Heyneke told Daily Maverick.

On Tuesday morning, the South African Weather Service tweeted the rainfall amounts for parts of the province from the past 24 hours, from Monday at 8am until Tuesday morning at 8am:

Interesting rainfall figures from the series of cold fronts, with flooding reported in various parts of the City of Cape Town. These rainfall figures are from the past 24 hours, recorded this morning (14 June 2022) at 08h00.#StaySafe pic.twitter.com/rQKS80Gy3d

“A further 20-30mm [of rain] can be expected over the south-western parts of the Western Cape, while 5-10mm [is expected] over the rest of the province from Tuesday afternoon until the evening,” Heyneke told Daily Maverick.

The showers and rain will start to clear from Wednesday afternoon, with no rain in the forecast for Thursday and Friday, Heyneke said.

Ali Sablay from the Gift of the Givers told Daily Maverick that the NGO’s teams were already on standby to assist flood victims, when the weather warning was issued on 9 June.

“Every year around this time of the year, our teams are geared up for floods. In February and March we begin preparations in anticipation of flooding during this period,” said Sablay.

Cold fronts are not uncommon in the Western Cape at this time of year. In May 2021, persistent rainfall caused severe flooding in parts of the province.

Sablay added that, since the heavy rainfall began, calls from flood victims in affected areas “have been pouring into” Gift of the Givers offices.

“Our teams are currently busy in five locations, including Masiphumelele informal settlement in Kommetjie, Nyanga, Kraaifontein, Bishop Lavis, and Ravensmead,” he said.

“We just received calls from Langa and Gugulethu where a few structures have flooded as well. Our teams are currently on the ground assisting the flooded victims with warm meals and blankets,” added Sablay.

Sablay said that with the relentless rainfall, Gift of the Givers teams were advising people to stay with family or neighbours, and “go to places of safety” during this time.

“Wherever there is a place of safety being set up for flood victims in need, Gift of the Givers will provide families with mattresses and warm meals,” Sablay told Daily Maverick.

Unfortunately, there are a number of communities heavily flooded but our teams will work closely with the Urban Mobility Directorate to support their efforts to unblock roadside storm water gullies in order to remove any obstructions causing the flooding in areas. pic.twitter.com/4qXIRN1LxI

The City of Cape Town has appealed to residents to, where possible, help reduce flood risk where necessary by:

Any weather-related emergencies can be directed to the City of Cape Town’s public emergency communication centre by dialling 021 480 7700 from a cellphone or 107 from a landline.

The South African Weather Service has also urged people to regularly monitor updates and alerts from its website.

For more tips on how to stay safe on the roads during stormy, wet weather, click here. DM

Daily Maverick sent queries to the City of Cape Town on Tuesday morning, but a response was not given by the time of publication. Comment will be added once received.