Rescue efforts continue in the Western Cape after winte... 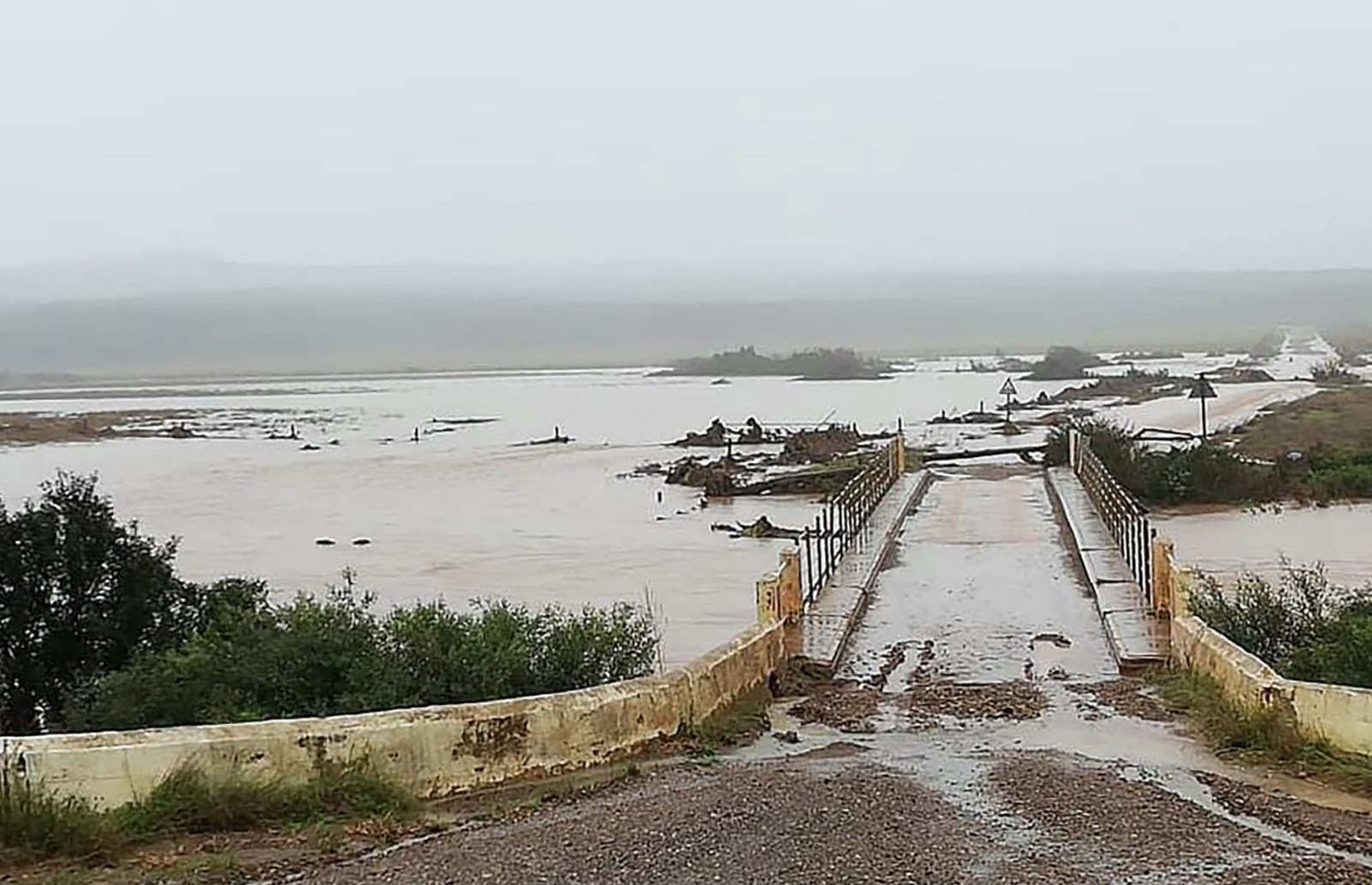 Severe flooding in Riviersonderend saw vehicles swept away and damage to property as the Western Cape experienced its first severe winter storm. It is expected to reach the Garden Route by late Thursday afternoon. (Photo: Jolene Human//TWITTER)

Persistent rainfall has caused severe flooding in parts of the Western Cape. Evacuation and rescue efforts are ongoing as the storm moves towards the Garden Route where it is expected to weaken.

Rescue efforts have continued in the Western Cape where heavy rainfall has caused severe flooding and destruction in the province’s first severe winter storm.

By Friday morning, hundreds of people had been evacuated, two people confirmed dead and two people reported missing after the storm struck on Wednesday.

The Overberg region, in particular Swellendam, Bredasdorp, Struisbaai, Riviersonderend and surrounding areas has been most affected. Large parts remain flooded.

According to Wayne Venter, a forecaster at the South African Weather Service, the storm is pushing rainfall across the south coast of the province and has moved into the southern Cape Winelands towards the Garden Route.

James-Brent Styan, the spokesperson for the Minister of Local Government, Environmental Affairs and Development Planning,  department minister Anton Bredell issued a statement on Friday saying Gourits Rivier Mond, Stilbaai and Bitou saw some flooding as well as parts of Hessequa.

“The municipalities have managed the situation and it remains under control.”

A rare level 6 warning is in place for the Overberg region where rainfall is expected to continue until Saturday evening.

A level 6 alert indicates severe risks such as the displacement of communities, property damage, mudslides and danger to life because of fast-flowing rivers and flooding of roads, said Venter.

Styan said: “The severity of the storm is easing up but the amount of rain and the impact on infrastructure continues to pose problems and the area remains dangerous. Rivers in the region continue to rise, overflowing riverbanks in some areas and the water is coming down towards the ocean at speed.”

There have been no reports of heavy rainfall or flooding in the Cape Town metropole but a warning has been issued for heavy rain in Oudtshoorn.

According to the Western Cape Minister of Local Government, Environmental Affairs and Development Planning, Anton Bredell, efforts are ongoing to rescue people from rising waters. On Friday morning, a father and daughter were rescued and taken to safety by the National Sea Rescue Institute (NSRI), however, it was not confirmed from which area.

On Thursday, 45 farmworkers and a dog were rescued from floodwaters in Riviersonderend. Twenty-two men, 19 women and four children were ferried to safety during a six-hour rescue mission.

See how the @NSRI assisted in the rescue of farm workers last night in the storm-hit Overberg region. #ThankYouNSRI

Video supplied by the NSRI. pic.twitter.com/jXQhkSgQCC

Two people died on Wednesday evening in Bonnievale but no further fatalities have been recorded. A search is ongoing for two missing persons, one in Stormsvlei and one in Riviersonderend.

According to Styan, there are no reports of any casualties, missing people or evacuations in the Garden Route district.

In Struisbaai, approximately 300 families were displaced after their homes were flooded. Gift of the Givers was on-site to assist with evacuation and feeding efforts.

People have been housed in community homes, bed and breakfasts and shelters.

Western Cape project manager for Gift of the Givers in the Western Cape, Ali Sablay said the organisation is supplying three meals a day for the next five days, mattresses, blankets, clean drinking water, baby supplies as well as masks and sanitisers.

Gift of the Givers is also preparing to assist Bonnievale.

“We’re engaging with any other towns who require assistance from us”.

Several roads are closed and others damaged in the province.

The Tradouw Pass between Barrydale and Swellendam was closed due to rock falls but has since been reopened.

Malgas in the Southern Cape is cut off due to impassable roads. Contingency plans are in place for emergencies through Overberg Disaster Management, but the Western Cape government advised that no one should try to leave the area as roads have become dangerous.

The Meiringspoort pass, near Oudtshoorn, was closed but has since been reopened. Struisbaai/Bredasdorp road is flooded at Visserdrift but still open for traffic.

Due to a lot of water in the catchment areas, by Thursday evening it was predicted that the Breede River (and other rivers in the affected areas) would be experiencing higher than normal flood levels over the following 24 hours. The provincial government urged people in low lying areas close to rivers to be on alert for severe flooding.

A number of nature reserves hit by the heavy wind and rain have also been closed:

Bredell urged people in affected areas to remain indoors where possible, to avoid travelling around in the regions affected as roads are damaged and some bridges in rural areas have been washed away. If driving he said to exercise extreme caution and avoid crossing flooded roadways.

“Please contact the emergency services in the event of any emergency. The provincial emergency number is 112.” DM

For more tips on how to stay safe on the roads during story wet weather, click here.