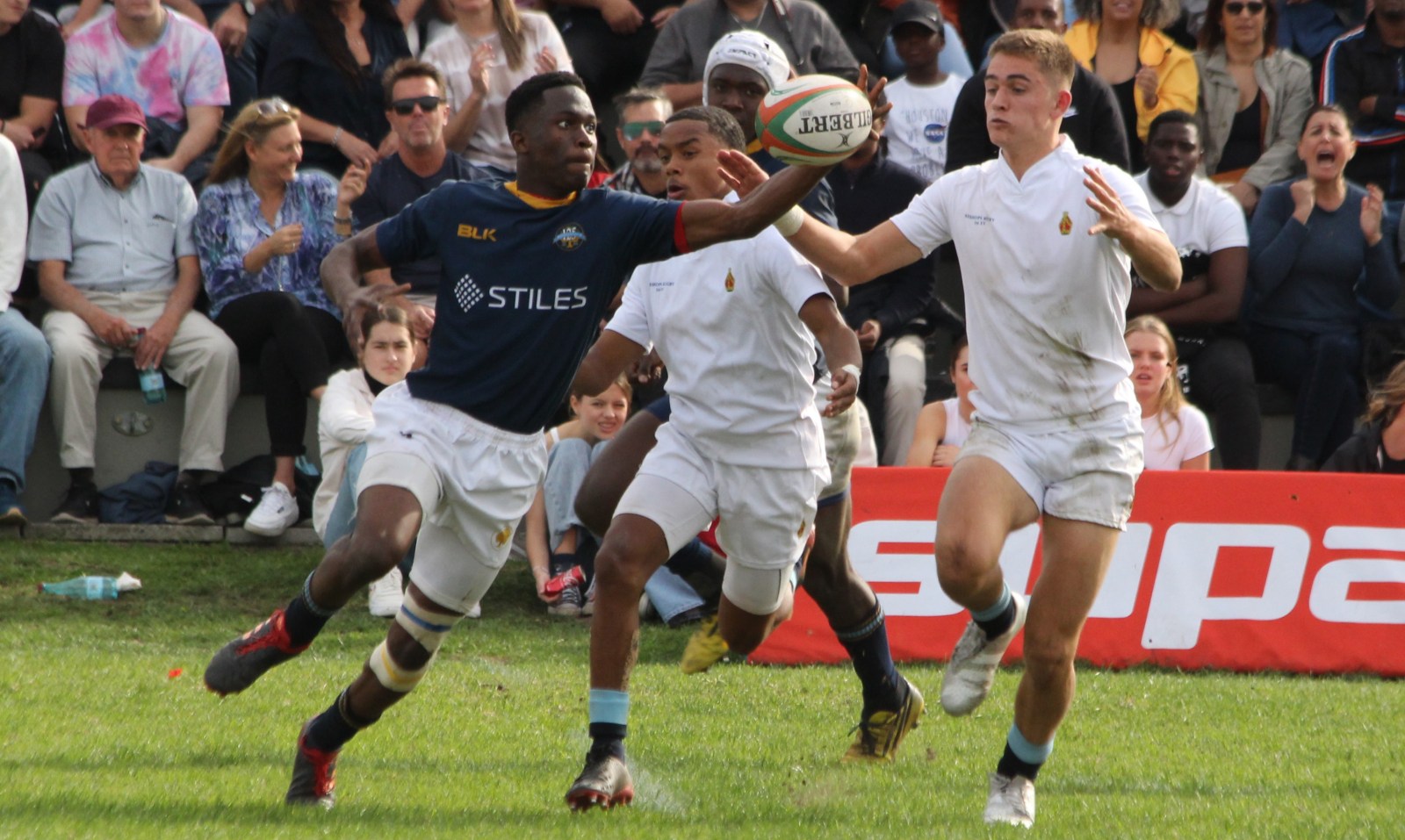 Wayden Moses and Jack Ryan of Bishops compete for the ball with Juma Amisi of Rondebosch. (Photo: Craig Watson/Bishops)

The windy weather played a big role in the result and the way the game was played at Bishops.

“It was a hard clash, obviously the wind played a huge role today. We came back in the second half just pushing, knowing we can have a good fight coming back, and that’s what we did, we just kept on pushing,” said Rondebosch captain Gareth Blackmore.

After a Covid interrupted season meant the two rival schools did not get to play each other in 2020, it was Bishops who thumped Rondebosch 50-10 last year.

“Coming after last year, it feels amazing coming off with the win,” said Blackmore.

However, Rondebosch got off to the worst possible start, conceding two quick tries. Playing with the wind to their backs in the first half, Bishops flew off the mark, giving the ball air with beautiful interplay between forwards and backs.

This led to two tries finished excellently by Bishops’ right wing, Jack Ryan, as flyhalf Shaywan Blankenberg converted one and missed the other to take an early 12-0 lead.

“We weren’t very clinical in the first half. I’d say in the first 10-15 minutes we were very poor,” said Rondebosch hooker and man-of-the-match Jonathan Birhange.

Blankenberg then slotted a penalty over from in front of the poles to make it 15-0, Bishops having played all the rugby in the first half.

“It’s just 35 minutes that you can’t get back, so I told them to leave that in the past and look at the next 35 minutes. I told them, first score after half-time with the massive wind behind you. 15 points, I thought wasn’t good enough, they obviously proved that right for me,” said Rondebosch head coach Joel Carew about what he said to his team at half-time.

Things just did not seem to go the way of Rondebosch in the opening parts of the second half when Bishops’ outside centre Gilermo Mentoe chased down Rondebosch left winger and Western Province sprinter Juma Amissi for nearly 60 metres. Mentoe tackled Amissi at the shoelaces bringing the Rondebosch flyer down mere centimetres from Bishops’ try line.

This passage of play did however set up the first try for Rondebosch, flyhalf Jacques Jooste crashing over the try line with three Bishops defenders trying to stop him. Jooste missed the conversion to his own try but the try did provide Rondebosch with much-needed momentum.

With the wind and momentum on their side, Rondebosch snapped up their second try through Birhange who showed incredible strength close to the try line. Jooste slotted a relatively easy conversion to make the match 15-12.

A few minutes after Birhange’s try, Rondebosch set siege on Bishops’ try line but the white-clad army of Bishops stood firm for multiple phases of attack.

With a penalty five metres out from Bishops’ try line, Rondebosch were left with no other option but to go for posts. A successful penalty by Jooste levelling matters at 15-a-piece with 10 minutes to go.

“Some stuff didn’t go to plan, I thought Bishops did well to stop the maul. But I told them to get nice and direct, I think in the first half we were trying to play a bit too much rugby and move the ball around too much. A massive performance from all of the forwards, especially Jono Birhange,” said Carew.

Another siege from Rondebosch resulted in a scrum in Bishops 22. Inside centre, Jamie Ricketts ran a brilliant line off Jooste’s shoulder to cut through the Bishops defence and hand Rondebosch the lead for the first time in the match with two minutes remaining. Jooste missed the conversion to make it 20-15 and give Bishops a sniff of an opportunity to sneak back into the match.

Bishops threw everything they could at Rondebosch but the combination of the strong wind against them and tiring legs, Bishops were unable to launch another attack capable of breaking down the Rondebosch defence.

“It was a game of two halves, the wind played a big part. In the first half nothing could stick and the second half probably left some points out there but absolutely amazing feeling after the game,” said Carew.

Western Province referee, Aimee Barrett-Theron blew the whistle and in no time the field was filled with away Rondebosch supporters celebrating their team’s tightly fought derby victory.