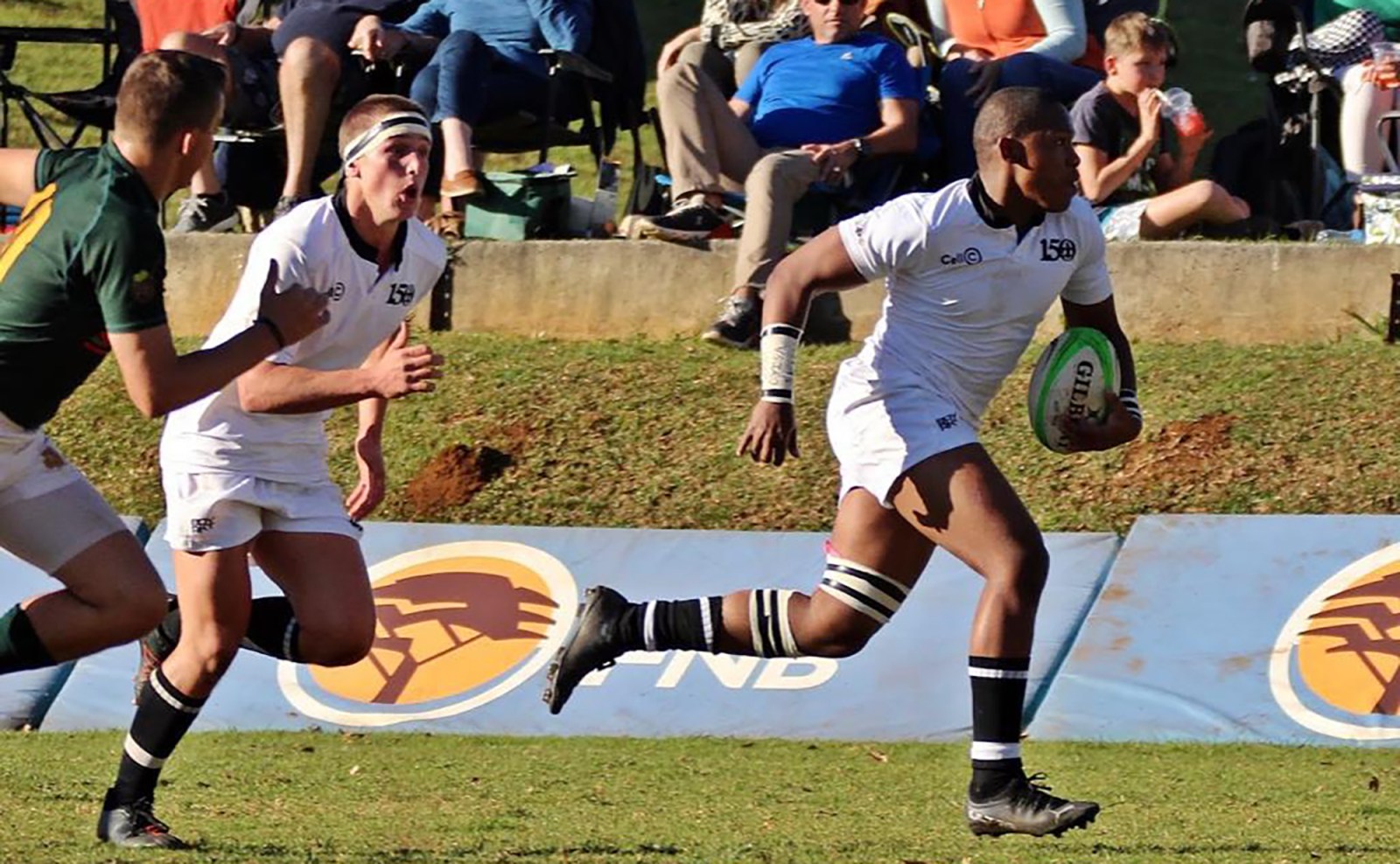 Hilton's Asive Soji on his way to the tryline on Saturday, 4 June 2022 at Hilton College. (Photo: Hilton College / Maralyn Atkins)

In another dazzling weekend of schoolboy rugby, Hilton College kicked a last-minute penalty to secure a tightly fought 29-28 victory over Glenwood High School in the KwaZulu-Natal Midlands on Saturday.

Hilton College have lost only one game all season, slipping to Paarl Boys in April, and they continued their excellent run of form on Saturday as they recorded their seventh victory on the bounce against a determined Glenwood side.

“It’s a talented group of boys. They’ve worked hard and they’ve got a good bond and they back each other up; they really get stuck in. Even [on Saturday], we didn’t play particularly well, we managed to — maybe a bit fortuitously — get over the line,” Brad Macleod-Henderson, the Hilton College coach, told Daily Maverick.

The match between the two KwaZulu-Natal sides was a real arm-wrestle from start to finish. Glenwood took an early 6-9 lead thanks to the boot of flyhalf Drico Marx, who converted three long-range penalties early in the contest.

“You’ve got to take your hats off to Glenwood, they played well. They kicked really well and put pressure on us; their number 10, kicking penalties from the halfway line just kept the scoreboard ticking over,” said Macleod-Henderson.

In fact, 23 of Glenwood’s 28 points came off the impressive boot of Marx, who, with his dominant forward pack, kept the green machine of Glenwood in the contest.

“It was a tough game, we’re happy with scoring three tries and only conceding one,” the coach said.

A tactical move away from opting to kick penalties to goal served Hilton College well, as a quick tap and interplay by their forwards allowed tighthead prop Nicolas Snyman to score under the poles for the first try of the match, which took the score to 13-9 thanks to the conversion by Chris Horak.

Two minutes later, Glenwood fumbled a high, hanging box-kick from scrumhalf Chris Roy which winger Asive Soji capitalised on and dotted down another for Hilton, taking the score to 18-9, before yet another long-range penalty by Marx made the score 18-12 at halftime.

“It’s quite an interesting story, he was our centre until under-16 and then he moved to scrumhalf. He’s certainly mastered his box-kicks in these two years,” said Macleod-Henderson about scrumhalf Roy.

The ball didn’t get much air in the first half as both teams chose to keep things tight and at close quarters. Glenwood continued their strategy — in the second half — of piling on the pressure through flyhalf Marx, as he took the score to 18-15 early in the second half.

“In the last 10-15 years they’ve probably been the top rugby side in KZN so we knew it was going to be a tough game. They changed things up a bit, they kicked a lot more than they normally do, so that took us by a bit by surprise and it pretty much worked for them; we were quite fortunate to get out of there,” said Macleod-Henderson.

Glenwood sustained pressure on Hilton’s tryline with their dominant scrum, abandoning their tactics of kicking to goal and rather choosing to scrum. The pressure eventually paid off as they swung the ball wide to their nippy right wing who finished excellently in the corner as Glenwood took the lead for the first time in the second half. Marx then put another long-range penalty over to make the score 25-18 for the visitors.

Hilton struck back through a penalty of their own to make it 25-21. An excellent reverse line, from the base of the ruck, by outside centre Michàl de Beer then split open the Glenwood defence as he scored next to the uprights to provide Hilton with a 25-26 lead with the conversion to come.

In a rarity in rugby, the conversion was excellently charged down by a determined Glenwood chasing team. As the pattern of the game continued, Marx converted another long-range penalty to give Glenwood a slender 26-28 lead with only a few minutes left on the clock.

Hilton College were then awarded a penalty for a high tackle inside of Glenwood’s 22m line. Horak converted the penalty excellently, despite the pressure, to make the score 29-28.

“We never managed to get away from them. We were quite fortunate in the end to hang in there and get a penalty late in the game and fair play to Chris Horak for converting it,” said Macleod-Henderson.

Glenwood were forced to run from deep and force the situation, which led to an unforced error and a knock-on as the referee blew the final whistle, sending the Hilton crowd into jubilation.

“It’s always great to be playing at home, the boys love playing at home. We’re very fortunate being a boarding school; pretty much the whole school is there. We’ve got the black and white behind the white,” said Macleod-Henderson.

“I think it’s just dedication from the guys, first- and second-team guys are putting in all the hard work. They’re coming out Monday, Tuesday, Thursday,” said Rondebosch head coach Joel Carew to Daily Maverick earlier this season about his side’s wonderful form this season.

“The guys are just hungry, I think that two years off from Covid, the guys are very keen to play rugby and to get into it.” DM