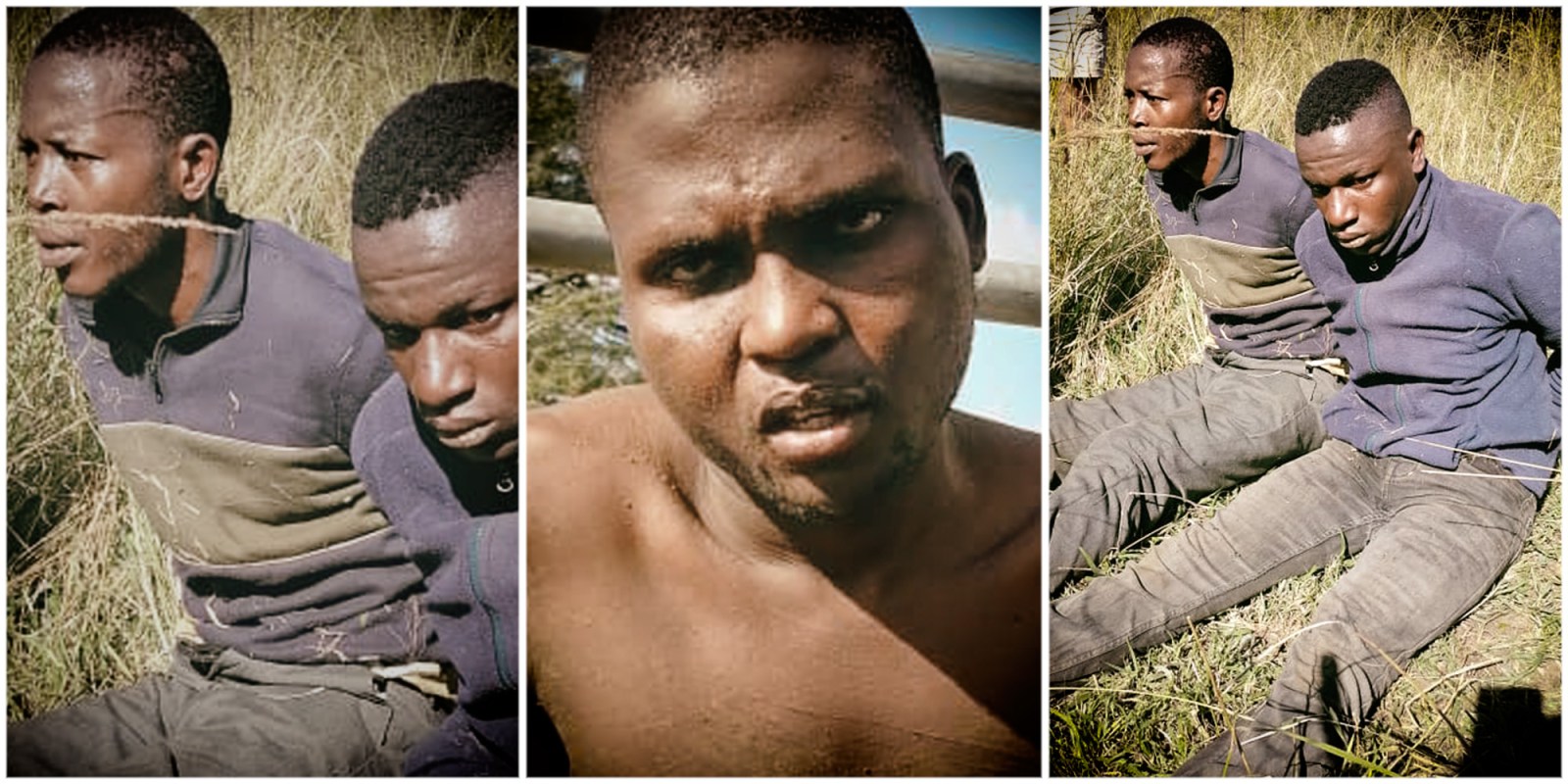 Centre: Alleged poacher Vusi Mdluli apparently ripped off his shirt ‘to blend with the bush’ after being spotted by cameras and a patrolling helicopter. According to Ezemvelo KZN Wildlife: ‘It is common for poachers to try to hide from the Ezemvelo chopper by removing their clothes.’ (Photos: Ezemvelo KZN Wildlife) | Suspects Sizwe Tivane and Samkele Sithole pictured shortly after their arrest in Hluhluwe-iMfolozi Park last week. (Photo: Ezemvelo KZN Wildlife)

Although all three men were caught before they could kill any rhinos, the death toll for the species has already reached 123 in KwaZulu-Natal in the first six months of this year.

Under public pressure for its recent failure to stem a renewed wave of rhino poaching, the Ezemvelo KZN Wildlife agency has announced the arrest of three suspects in the space of two days at its flagship Hluhluwe-iMfolozi Park.

Two alleged poachers drove down to the park from their homes in Mpumalanga and rented or borrowed a rural home just a stone’s throw from the boundary fence, to keep a close watch on rhino movements and field ranger patrols before entering the park.

A third suspect, from nearby Mtubatuba, tore off his shirt and tried to bolt when he spotted a patrol helicopter circling above him, but he was chased down by a K9 dog unit and arrested soon afterwards.

Although all three men were caught before they could kill any rhinos, the death toll for the species has already reached 123 in KwaZulu-Natal in the first six months of this year — mostly in the 97,000-hectare Hluhluwe-iMfolozi Park.

Ezemvelo has been in turmoil for more than a decade. Its last permanent chief executive resigned in 2017 after clashing with board members, and in 2020 the entire board was suspended following “prima facie allegations of maladministration” at the agency, which has an annual budget exceeding R1-billion.

Finally, after a two-year delay, the provincial MEC for environmental affairs, Ravi Pillay, announced the appointment of a new 11-member board on 6 June, although there has not been any word yet on the results of a forensic investigation into the affairs of the previous board members.

Some observers have likened the new board to a curate’s egg, as it includes ANC party stalwarts along with some new members with a sound track record in conservation or financial administration.

But to the disappointment of conservationists who had been urging the provincial government to appoint a nonpolitical team of professionals with a genuine interest in wildlife conservation, the new board will be headed by former provincial agriculture MEC and KZN legislature Speaker Lydia Johnson.

Logie Naidoo, a former deputy mayor of eThekwini who has more recently taken on a role as a stand-up comedian during retirement, has also been appointed to the board. Questions have also been raised about the appointment of the young ANC Moses Mabhida Region cadre Njabulo Maxwell Mtolo.

Balanced against these choices, however, the respected conservation and business sector leader Iain Ewing has been appointed as deputy chair of the board.

Notably, Ewing is the only member of the previous board to be reappointed — having resigned in protest in 2020 before his fellow board members were suspended.

Shortly before resigning from the former board two years ago, Ewing raised concern that he had not been “privy to matters of significant importance” during his time on board subcommittees.

“Even at major board level, we are not getting the necessary clarity on a number of very concerning issues and in some instances, I have gained the impression that there is a deliberate intent for this information not to be discussed at board meetings,” he said in his resignation letter.

Other members joining him on the new 11-member board are:

Though the new board has yet to hold its first meeting, it is understood that top of the agenda will be the appointment of a new, permanent chief executive officer to restore stability and morale after years of decline in a conservation agency that was once ranked among the best in the world.

Its predecessor, the Natal Parks Board, is credited with saving the white rhino from global extinction. Sadly, however, 2022 may yet go down on record as the worst year for rhino poaching in KZN, with 123 rhinos slaughtered in the first half of this year. The record is 222 killings in 2017.

Last month, the first part of a hitherto secret report on rhino poaching in KZN came to light after a Promotion of Access to Information Act request by the Democratic Alliance. The report exposed significant failures in rhino security at Ezemvelo’s rhino reserves.

Despite these challenges, Ezemvelo has just announced the arrests of the three would-be poachers before they could kill any rhinos.

Spokesperson Musa Mntambo said that Vusi Mdluli from the Mfekayi area in Mtubatuba was arrested on 6 June after his presence in the Hluhluwe-iMfolozi Park was picked up on camera.

“Rangers, assisted by K9, were deployed to track him. When he saw a chopper he decided to run and took off his T-shirt in an attempt to blend with the bush. Unfortunately, the dogs had already seen him and were on top of him before he could implement his escape plan. It is common for poachers to try to hide from the Ezemvelo chopper by removing their clothes.”

Mdluli appeared in court in Hlabisa the following day, 7 June, though Ezemvelo did not say whether he was granted bail. The next day, another two poachers were arrested in the park with assistance from the K9 unit.

“The two had recently travelled from Mpumalanga province and were staying in a house that is a stone’s throw away from HiP. The proximity of the house to the park provided the two with an advantage point [sic] to observe everything that was going on inside the park.

“They were not only able to monitor the field rangers on foot patrol but were also able to scan the movement of rhinos inside the park.

“Ezemvelo field rangers who were on the early morning foot patrol noticed footprints and decided to call the Ezemvelo K9 unit. The K9 unit began to follow the tracks, which led them near where the suspects were hiding.

“Unfortunately, the suspects heard the noises of the rangers approaching and decided to run in different directions. They left behind a bag and a few of their items on the ground. They, however, managed to run with their .375 rifle. A decision was immediately taken to call for a chopper and additional assistance from Wildlife College’s K9 unit. The Wildlife College K9 unit is currently providing training to Ezemvelo K9 unit at HiP.”

The two suspects, Sizwe Tivane and Samkele Sithole, both from Mpumalanga, were arrested in the afternoon. They were found with a .375 rifle. They appeared in court on Friday, 10 June and their case was postponed to 12 June.

“Our improved and random deployment of field rangers, as well as the presence of [the] SAPS inside HiP have made it difficult for would-be poachers to fully understand our movements. TheK9 unit is also proving to be a welcome addition to our fight against rhino poachers. I trust that these recent arrests will provide us with enough information to make more arrests,” said Ezemvelo’s acting CEO, Ntsikelelo Dlulane. DM/OBP