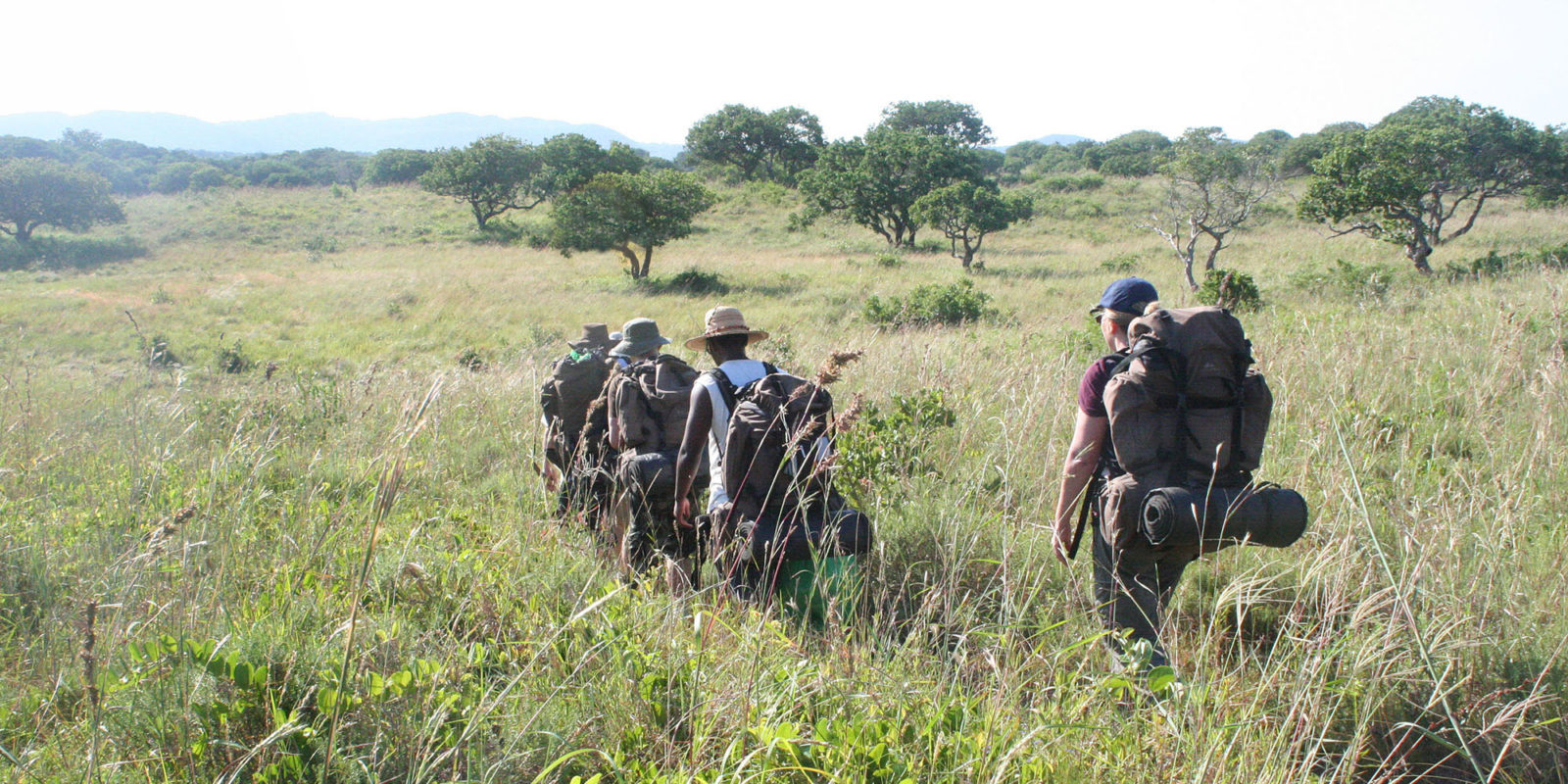 Ezemvelo KZN Wildlife's many legacies include setting aside wilderness areas where visitors can experience natural environments where no development is allowed (Photo: Tony Carnie)

The entire board of Ezemvelo KwaZulu-Natal Wildlife has been suspended, bringing into sharp focus the deep management problems within the entity that is responsible for 80 game reserves.

The former Natal Parks Board, the custodian of two of Africa’s oldest game reserves, was once rated among the world’s leading wildlife conservation organisations.

It chalked up a string of achievements which included saving the white rhino from global extinction and setting aside Africa’s first wilderness areas. During the 1960s it also pioneered new animal capture techniques that would help other conservation agencies to replenish depleted wildlife stocks across the continent.

Responsible for roughly 80 game reserves and nature reserves, including the flagship Hluhluwe-iMfolozi Park where a tiny remnant population of southern white rhinos was multiplied to restock Kruger National Park and other reserves in the last century, Ezemvelo has steadily lost its shine over the last decade or so following a series of scandals involving political appointments, forensic audits, funding cutbacks and leadership vacuums.

For the past four years, the organisation has been essentially rudderless, following the resignation of its last permanent CEO in September 2017 after a damning forensic investigation which revealed a failure by the board and executive to contain rocketing staff costs which currently swallow more than 80% of its conservation management budget.

Now, still without an experienced or permanent leader, Ezemvelo has been rocked by fresh controversy after the provincial government suspended the entire 12-member board – one of whom resigned four months ago after raising concerns that he and some of the other board members were being kept in the dark about “grave and very concerning issues”.

Board member Ian Ewing, who resigned, said there appeared to be a deliberate effort to ensure that some of these issues were not discussed at board meetings and he also raised concern about the continued exodus of highly trained, skilled and passionate staff, which further undermined the organisation’s morale.

The suspension of the board, announced last week by provincial MEC for Environmental Affairs Nomusa Dube-Ncube, means that the management and oversight of Ezemvelo – with an annual budget of more than R1 billion – has been left in the hands of the latest acting chief executive, Ntsiki Dlulane.

On his LinkedIn profile, Dlulane lists his qualifications as a diploma in construction management and quantity surveying from Mangosuthu University of Technology, a B.Tech degree in quantity surveying and a one-year “post-grad in business management” from the Management College of Southern Africa. He joined Ezemvelo in 2009 as a projects and partnerships manager and his Ezemvelo CV says he has been a member of the African Builders Association, the Foundation for African Business and Consumer Services, and that he held a previous leadership position in the Black Business Forum.

Six years ago, as head of Ezemvelo’s special projects unit, Dlulane played a central role in the ripping up and draining of a protected wetland in northern KZN with bulldozers, leading to major embarrassment for Ezemvelo and threats of criminal charges by the Green Scorpions environmental inspectorate.

It is understood that Ezemvelo was subsequently compelled to pay a significant portion of the wetland rehabilitation bill, but no investigation into Dlulane’s role was announced by Ezemvelo.

Earlier this year, the Sunday Tribune newspaper reported that Ezemvelo had hired six bodyguards for Dlulane at a cost of R226,000 per month after he received “serious threats” for allegedly cancelling a R22-million Ezemvelo construction contract.

Dlulane did not respond to questions from Daily Maverick on these alleged threats, the decision to hire several bodyguards or who had authorised the protection expenditure.

MEC Dube-Ncube’s office has also failed to respond to questions about this issue or the specific reasons for her decision to suspend the entire board “as a result of the prima facie allegations against the Board as a collective”.

In a statement last week, the MEC said she had called on Ravi Pillay, the provincial MEC for Finance, to order a forensic investigation and to also designate an appropriate accounting authority for Ezemvelo. In the interim, Dlulane would act as the accounting authority “to only exercise such duties as are absolutely crucial to the continued functioning of Ezemvelo”.

Ezemvelo, along with several other conservation bodies dependent on tourism income, has been hard hit by a major funding crunch during the Covid-19 lockdown, although it is understood that it recently received a significant injection of emergency funding from the provincial Treasury.

Outlining her reasons for suspending the entire board, Dube-Ncube made reference to “allegations of maladministration published by various media houses” and said she wanted to assure the public of her commitment to transparency and accountability.

“At this stage we wish not to cloud all processes, focusing on instituting this forensic investigation at Ezemvelo, with unnecessary comments in the media and other platforms,” she said

Nevertheless, questions have emerged over the extent of the latest probe into Ezemvelo’s financial affairs and the motives for suspending board members. Daily Maverick tried to contact the 11 suspended board members for their comment on the MEC’s decision to remove them all from office.

Those who elected not to comment, or who did not respond to phone and text queries, were board chairman William Mngoma, deputy chair Pat Lebenya-Ntanzi and fellow board members Diana Hoorzuk, Vusi Mvelase, Sipho Mtolo, Inkosi Shilo Mthembu and Thandeka Ntshangase.

However, board member Sihle Ndlovu expressed shock over the decision, noting that members had been trying to stabilise the organisation and appoint a permanent CEO for Ezemvelo following the resignation of Dr David Mabunda, nearly four years ago. Since then, there have been three acting CEOs.

Ndlovu, an accountant appointed to represent the interests of the farming industry, said it was vital for the stability of the organisation and the morale of Ezemvelo staff to have a permanent CEO, especially in the current financial environment when there were times when Ezemvelo had battled to pay staff – even before the Covid-19-related cash crunch.

Former board member Ian Ewing, who chairs the Ian Player Magqubu Ntombela Foundation and the Wilderness Leadership School, resigned from the board early in April, saying he was leaving with a heavy heart.

Ndlovu said, however, that he welcomed the investigation as an opportunity to “clean” and to restructure an organisation that was “bleeding” and in distress.

“But in terms of corruption…(that) must have happened before us… Let the MEC deal with the process and the culprits. My conscience is clear. I have a good record and I can’t throw it away.”

Board colleague Snegugu Ncube said: “The decision of the MEC to investigate any prima facie allegations against the board is most welcome and it is understood in the spirit of good governance which I remain fully committed to. The investigation can further be assured of my full co-operation where necessary.”

Thulisa Ndlela, a board member and former executive of the ANC Youth League’s Howard College campus committee, also welcomed the decision “in order to give space to an investigation into allegations of wrongdoing against the Board as a collective”.

“It has always been my considered view that the effort to fight wrongdoing and promote good governance in public institutions requires that any and every allegation be investigated and if wrongdoing is established, consequence management be enforced,” said Ndlela, whose own appointment to the board was questioned by provincial Treasury officials in 2017 due to his apparent lack of experience.

Board member Rob Haswell, who left the former Democratic Party to join the ANC in 1992, said his conscience was also clear. He had not been involved in any financial irregularities and had not chaired any committees.

By suspending the entire board, he said, “you get tarred with the same brush” and he was surprised that the MEC had raised “vague references to financial irregularities” rather than specific charges.

“I feel quite sad for the young professionals and highly competent people on the board, but if there are any individuals involved, they must face the consequences – but I’m at a loss to understand why we are all lumped into the same barrel of suspicion.”

“I have repeatedly pointed out that Ezemvelo is expending more than 80% of its budget on salaries and wages, which leaves precious little for any maintenance. There is also an urgent need to grow revenues. I joined the board 18 months ago and much store was placed on the need for commercialisation of resorts.”

Haswell said he believed that from a financial perspective, Ezemvelo is a “sinking ship”

Former board member Ian Ewing, who chairs the Ian Player Magqubu Ntombela Foundation and the Wilderness Leadership School, resigned from the board early in April, saying he was leaving with a heavy heart.

“However, it has become impossible for me to add value to Ezemvelo. As a Board member on the HR & Remunerations Committee and the Biodiversity & Conservation Sub-Committee, I have still not been privy to matters of significant importance that should be considered and decided on in these sub-committees and then, in turn, reported to the Board.

“Even at major Board level, we are not getting the necessary clarity on a number of very concerning issues and in some instances, I have gained the impression that there is a deliberate intent for this information not to be discussed at Board meetings.

“I further believe that there is an intentional disconnect in the critical information that flows between senior management and Ezemvelo at Board level and our stakeholders,” he said in his resignation letter.

“These are grave areas of concern and I have raised at almost every Board meeting my areas of concern regarding inter alia HR appointments, expenditure, tenders and procurement. Notwithstanding my repeated requests for my concerns to be acted upon, I have still not been provided with satisfactory explanations, nor has there been any accountability when it has been requested.

“My deep concern is for Ezemvelo, the entity itself, as we have had an exodus of highly trained, skilled and passionate individuals. While there are a number of Ezemvelo employees and Board members that I hold in the highest regard, it is very unfortunate to see the lack of positive morale.” DM