Navigating a network of artist studios in the centre of Joburg 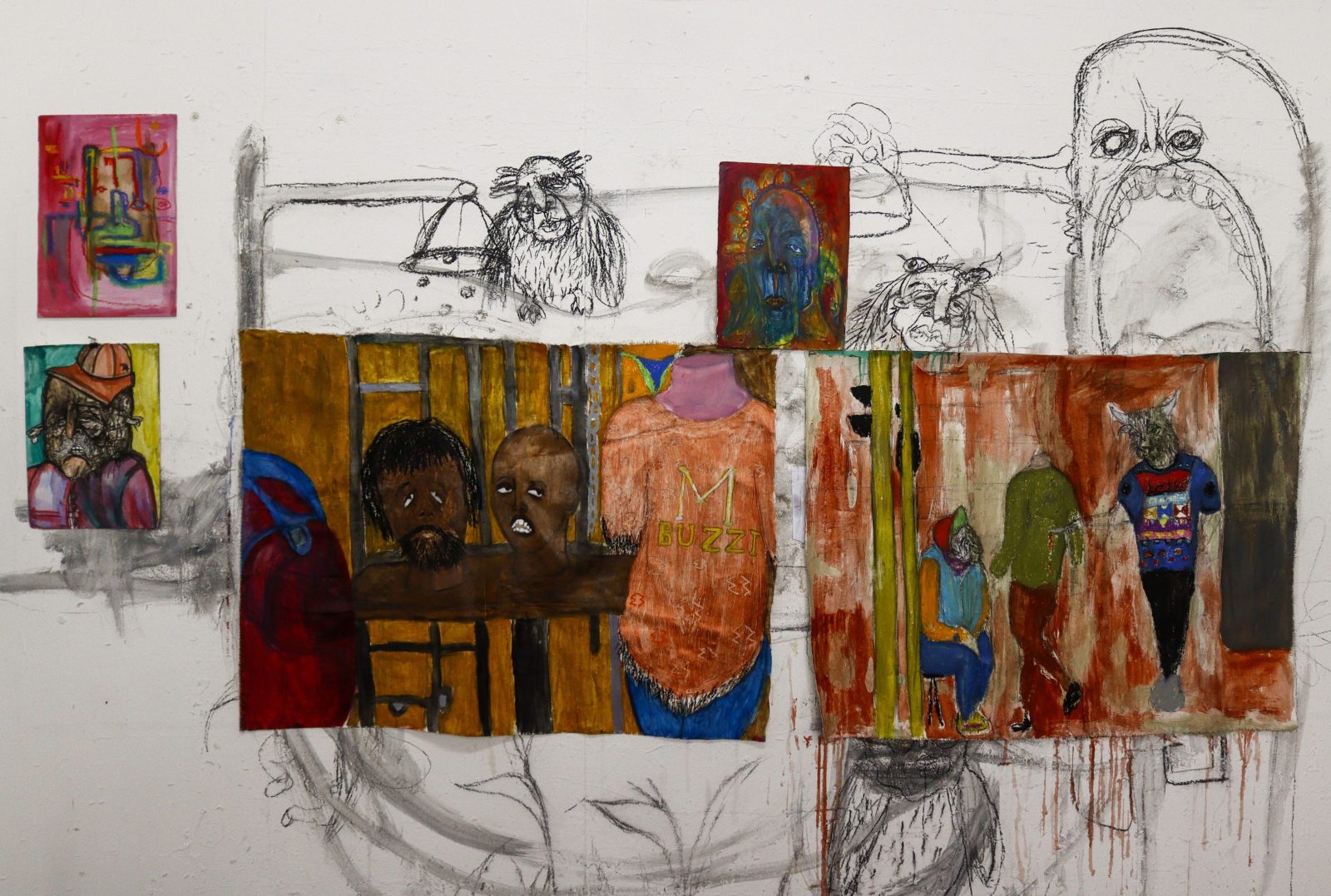 While Open Studios wasn’t trying to provide an alternative to Johannesburg’s art fairs and galleries, it was short-circuiting the conventional networks of viewing, buying and selling art and, in doing so, establishing a new audience base in the city. By opening up their spaces to the public, artists can sell their works right off the walls of the studio.

“Do you know what the next stop is?” asks the man with the camera around his neck as he steps onto the shuttle, idling on Doornfontein’s 5th street.

“Living Artist’s Emporium,” responds a passenger, without looking up from his phone.

“Is that at Victoria Yards?”

“It’s at The Tennis Club,” says someone seated at the back. “I used to go for lessons there when I was in school.”

“I used to party there,” says someone else.

I am eavesdropping on a group of small-talking strangers as we wait for the shuttle to take us to our next destination. It’s the last Sunday of May in Johannesburg and we’ve just finished touring the many artist studios of Ellis House. Before that, it was the crowded passageways of August House, home to more than 50 independent artists, most of whom had opened their workspaces and processes to the public as part of the Open Studios festival.

The first event of its scale to take place in the city, Open Studios identified the network of artist studios in the city – August House, the Bag Factory, Ellis House, Living Artists Emporium, Constitution Hill’s Transwerke Studios, Brixton’s Shade gallery and Victoria Yards – and opened them up to a viewing public for the weekend.

The event, which took place from 28 and 29 May, is run by the Meta Foundation, the non-profit arm of August House that bases its programming on the three key pillars of “the artist”, “the artwork” and “the audience”. It was free, too. All you needed to do was register online or at the venue itself in order to gain access to the buildings and make use of the shuttle service. As for the artists, opening their studios to the public meant opportunities to network, to unpack their process and, of course, to sell.

“The idea came about in order to build something as a community,” explains director of the Meta Foundation Sara Hallatt. “Covid made us all feel extremely isolated and I came to realise that many of us are doing great work in the city but our networks are small. By coming together, the aim was to build greater audiences for ourselves and our ongoing work, as well as hopefully bringing a new creative energy to the city.”

Open Studios was a welcome break from Johannesburg’s art fairs – ticketed events in the Sandton and Rosebank districts, increasingly modelled around vanity VIP programmes – and its established galleries, mostly based in the city’s northern suburbs. Even the Turbine Art Fair, which takes its name from Newtown’s Turbine Hall, vacated the building for greener pastures a few years back.

And while Open Studios wasn’t trying to provide an alternative to Johannesburg’s art fairs and galleries, it was short-circuiting the conventional networks of viewing, buying and selling art and, in doing so, establishing a new audience base in the city. By opening up their spaces to the public, artists can sell their works right off the walls of the studio.

The numbers are still being crunched from May’s event, but Hallatt explains that from a previous, scaled down, iteration, held in October 2020, 73% of the artists who participated in the event sold work between the values of R5,000 and R100,000. “Some of those sales were immediate – on the day – while others were finalised post the event, but [happened] because of the event,” she explains.

Open Studios is also a good way to gain an unfiltered or uncurated sense of the kind of work being produced in Johannesburg. Other than missing the shuttle to Charlie & Gerald’s Town Treasure – a result of getting too caught up in conversation at The Bag Factory – I managed to visit every venue on the programme over the two days of the festival.

On day one, I arrived at Constitution Hill’s striking art-deco Transwerke building early enough to find artist Thina Dube still adding prices to his work, welcoming people into his studio with a roll of masking tape in one hand and a pencil in the other.

Other artists, like Tshepo Sizwe Phokojoe, were already discussing their work with visitors, swapping numbers and Instagram handles. For the group of printmakers at The Arts Company, it was just another day in the studio and they were happy to talk viewers through their process as they worked.

In Bev Butkow’s studio space at the Bag Factory, populated by her distinctive multi-media entanglements, I heard about her decision to leave a career in accounting to pursue a career as an artist. Later, standing on the corner of Caroline and Chiswick streets in Brixton, I spoke with Shade gallery’s Tamzyn Botha about a mutual obsession with discarded snapshots of strangers from bygone eras, many of which can be found in Shade’s curated collection of reclaimed materials. On day two, at August House, Vivien Kohler unpacked his approach to a new installation he’s busy with, while, at Victoria Yards, Hannelie Coetzee explained that a work in progress – a large spider with metallic legs and a body of charred wood – came to her in a bad dream.

These incidental connections and conversations – a welcome alternative to the adjective-laden sloganeering you find in most exhibition statements and catalogues – are a part of the essence of Open Studios. They’re present in the shuttles to and from the venues, in the queue to grab coffee, or wandering around artists’ studios as they work. They’re present in the artworks, too.

At Ellis House, the work of Sam Nhlengethwa and Blessing Ngobeni, who have their studios at August House and Victoria Yards respectively, was on display in the foyer. In a small exhibition of works on paper at Victoria Yards, I found a piece by Mpho Machate whose work I’d first seen a few hours earlier at August House. Visual artists who moonlight as graffiti writers (or vice versa) exhibit their work in studio while their monikers, rendered in slick, stylised letters, occupy the wall just across the street.

Artists and their artworks echo throughout the informal network of venues and studios, and navigating the city like this – through its art and artists – has a way of drawing your attention to the built environment in novel ways. As Hallatt puts it, an event like Open Studios can help audiences to better appreciate and understand the complexity of the city.

“Many of the buildings or places that participated are in interesting spaces that once had another life in the city and have been repurposed by the creative community. I think we have a habit, in Johannesburg, of knocking down and rebuilding. Our event shows that repurposing architecture is a more viable, environmentally and financially friendly way of addressing some of the challenges we have in the city at large.”

Will there be another iteration of Open Studios? According to Hallatt, they’re already working on the next one. “At its earliest, it will be in October but, if not, then again in May next year. Our intention is to have this on the annual art events calendar.” DM/ML