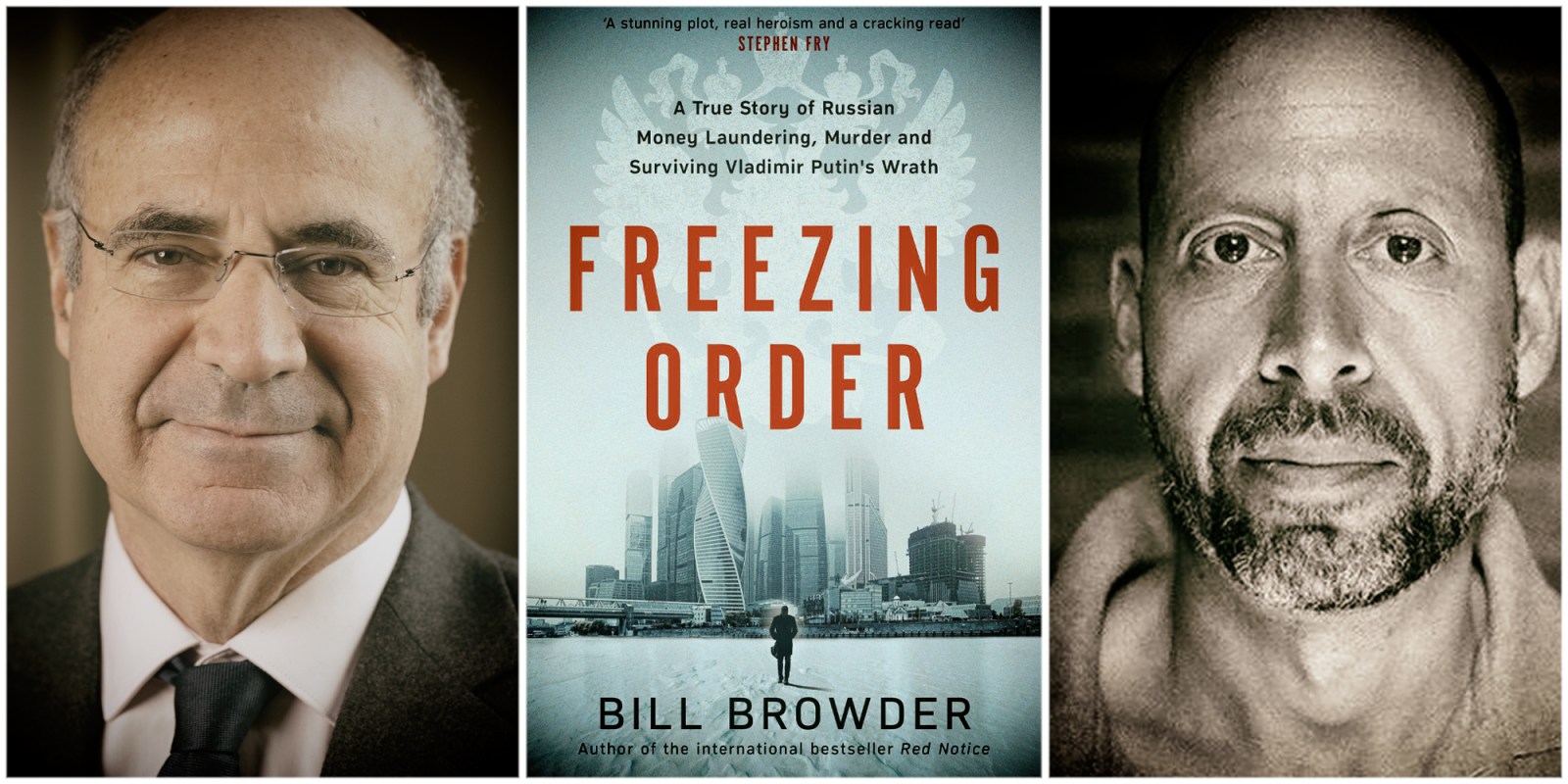 The Magnitsky Act, which imposes sanctions on brutal dictators and corrupt officials and businesspeople, has been adopted by 34 countries — but not South Africa, because of the government’s ‘shameful’ friendship with Russian President Vladimir Putin.

Bill Browder, the US-born British financier and political activist, says he has “run into a brick wall” trying to get Pretoria to pass a Magnitsky Act. Browder launched and successfully campaigned for the passing of the first Magnitsky Act in the US in 2013 to sanction Russian President Vladimir Putin and his cronies for their human rights abuses and corruption.

The legislation was named after Browder’s Russian lawyer, Sergei Magnitsky, who was beaten to death in a Russian prison in 2009 while investigating a $230-million tax refund scheme by government officials.

Browder described that saga in his 2015 book Red Notice — the Red Notice here being the Interpol notification to all countries put out at the request of Putin’s government that Browder was wanted in Russia.

Browder spoke in a Daily Maverick webinar on Wednesday about his new book, Freezing Order, which is in part a sequel to Red Notice. A bestseller in the US and many other countries including South Africa, it describes how he tracked down what had become of the $230-million that his friend Magnitsky had been killed for.

Browder said 34 countries — “most of the civilised world” — had so far passed Magnitsky acts, including the US, UK, Canada, Australia, the European Union (EU) and Norway.

Individual members of the EU were also starting to pass Magnitsky acts. They were currently being introduced in the Czech Republic, Ireland and Switzerland.

“So, it’s the kind of thing you expect in a normal, rule-of-law country. And I’ve tried getting a Magnitsky Act in South Africa and I’ve run into an absolute brick wall… no one in the governing party wants to talk to me,” he said.

Browder said he had never had that experience in other countries. And he had realised even more starkly since Russia invaded Ukraine that the reason was simply that: “South Africa is siding with Russia, not Ukraine.

“[There is] some strange historic feeling that the Soviets supported the African National Congress so now the government should align itself with a criminal enterprise, Putin’s regime. It’s completely unjustifiable.

“And I would say shameful… particularly shameful because you effectively have a genocide going on, a totally unjust situation where Russia is killing innocent civilians in Ukraine.”

Browder said the ANC’s friendship with Putin’s regime was also having a personal impact on him as he had fallen in love with South Africa on his first visit in 1996 and had bought a house in South Africa in 2001.

He had visited South Africa for a while after that, but after the Magnitsky Act was passed in the US, Putin had gone after him with several arrest warrants and he had consulted several people in South Africa including members of the government.

“And everybody told me: ‘Don’t come. If you come here you’ll be arrested.’ And so I haven’t been able to use my house in more than a decade because I’m afraid I’ll be arrested and handed over to the Russians if I come there.”

Essential to understanding Browder’s perception of Putin is that he believes the Russian leader is motivated entirely by greed and that all the justifications he offered for his actions — such as invading Ukraine to eliminate a neo-Nazi regime supposedly killing Russian speakers — are just pretexts.

He said he had calculated that Putin and his cronies had so far managed to steal about $1-trillion during the 22 years of his rule.

Browder said some people asked him how Putin could possibly be making money from his war against Ukraine. He explained that Putin had started the war to deflect the anger rising in Russia against his government for diverting so much state money away from public services.

Browder said corruption in Russia extended right through the society, from the lowliest traffic cop soliciting bribes to Putin at the top, and no one in government was working in the public interest.

He said corruption explained many of the setbacks the Russians had faced in the war in Ukraine. Corrupt military officers had sold soldiers’ rations and replaced them with dog food and even sold tanks to the Ukrainians for a fraction of their value.

Browder said his goal since Sergei Magnitsky was killed had been to find who got the $230-million he had been killed for.

His quest was greatly assisted by the fact that no data protection existed in Russia.

“You can go into a stall in the information market — a physical place — and say, ‘I want all the salary slips in Moscow, or bank account balances. And you can buy that information for not a lot of money, for five bucks, or 10 bucks or 50 bucks.”

But when the money trail went beyond Russian borders, it became harder to follow, because of data protection policies in most countries. However, Browder discovered Putin’s influence extended very far because of the vast amounts of money he could throw around.

Browder cited a veteran white-collar fraud attorney — ironically named John Moscow — who was working at the time for one of New York’s oldest, most prestigious firms, BakerHostetler. Browder had hired Moscow to help trace the missing $230-million and the attorney had come up with a great idea. He realised that whenever money moved between two Russian banks it went for a split second through a US correspondent bank.

That meant one could subpoena any of those US banks to hand over all the information about those dollar payments.

But, Browder said, one day, “Moscow ghosted us [cut off all communication]. It’s kind of weird to be ghosted by a lawyer you’re paying hundreds of dollars an hour to, but he ghosted us.”

So Browder hired a new lawyer who persuaded New York authorities to freeze and seize more than $2-million worth of New York property owned by one of the Russian gangsters who had received some of the $230-million.

Then Moscow had suddenly reappeared, defending the gangster against Browder’s seizure attempts. Browder said it was completely unacceptable for a lawyer to switch sides like that, but it had taken him three years of litigation to get Moscow removed from the case.

Browder said he found Western lawyers and others like them “who made conscious decisions to side with evil more reprehensible than the Russian gangsters they represented”, as the Russians were often more desperate.

Browder also described how some Western banks had colluded with the Russian gangsters in laundering the money.

He traced $200-million of the $230-million to a small Estonian branch of Denmark’s largest bank, Danske Bank. Browder said he had then worked with Danish journalists who had discovered that $8.4-billion of dirty money had been laundered through the same branch. And when Danske Bank itself had conducted its own investigation, it unearthed $232-billion of dirty money that had been laundered through its Estonian branch, which it then closed.

Daily Maverick journalist Richard Poplak, who mediated the webinar, asked Browder how he felt about Atul and Rajesh Gupta finally being arrested in Dubai this week — on a Red Notice issued by Interpol at Pretoria’s behest.

He welcomed the development, which he ascribed in part to the Gupta brothers having been sanctioned a few years ago by the US under the Global Magnitsky Act.

But he also cautioned: “Let’s not get too excited. I’ve seen this before.” Browder said the United Arab Emirates was notorious as a global haven for gangsters and there was a good chance that it could decide not to extradite the Guptas to South Africa, or after the ANC conference in December, Pretoria might decide to withdraw the extradition request. DM

If you want us to let you know about upcoming webinars, subscribe to our webinar newsletter.