George, Drakenstein and Stellenbosch municipalities have the best growth potential in the Western Cape, according to a report by the provincial Department of Environmental Affairs and Development Planning.

On Tuesday, the department presented its findings on the growth potential of towns to the provincial legislature’s Standing Committee on Agriculture, Environmental Affairs and Development Planning.

The Growth Potential Study (GPS) was carried out by the Department of Environmental Affairs and Development Planning. It serves as a tool to inform strategic objectives, policymaking and spatially targeted investment. The research was done in 2018 and published in 2020.

During the committee meeting, representatives from the department stressed that the information from the report was from 2018 and the next report would be made after the release of census data in 2022. 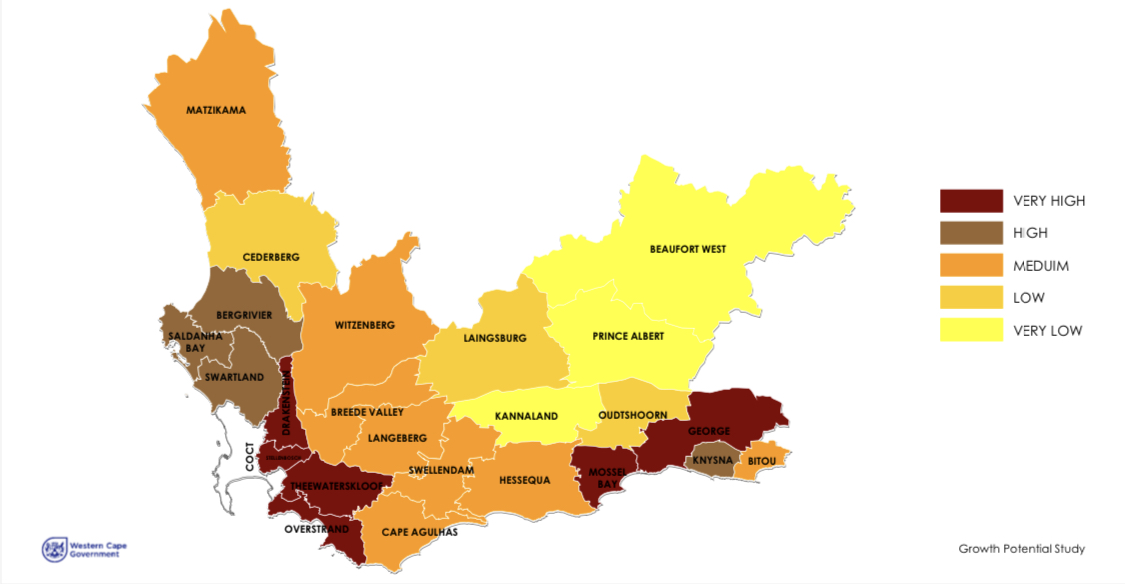 In determining the growth potential of towns, the study identifies five themes that are critical for economic growth:

In 2021, Daily Maverick reported how Beaufort West, Kannaland and Laingsburg were identified by the Auditor-General as needing “extra intervention and effort”.

Knysna and Bitou municipalities were the only two municipalities that dropped in the growth potential rankings, while Witzenberg Municipality made a jump from “very low” in 2013 to “medium” in 2018.

When asked to explain why a municipality like Knysna had dropped in rankings, Dylan Johnstone from the department said that during the period of 2013-2018, while infrastructure and economic development remained steady in Knysna, “institutional factors most likely caused a regress”. He did not elaborate.

During the meeting, legislature Deputy Speaker Beverley Ann Schäfer (standing in for another committee member) asked if political landscapes affected the rankings. Helena Jacobs from the department said that while she did not want to become entwined in politics or comments around audit outcomes, what she had observed was that bad audit outcomes were “not good for growth”. She said this was why it was so important for “us to understand management capacities” within municipalities.

The City of Cape Town as a metro does not feature in the report, which deals with only the 24 non-metro municipalities. DM