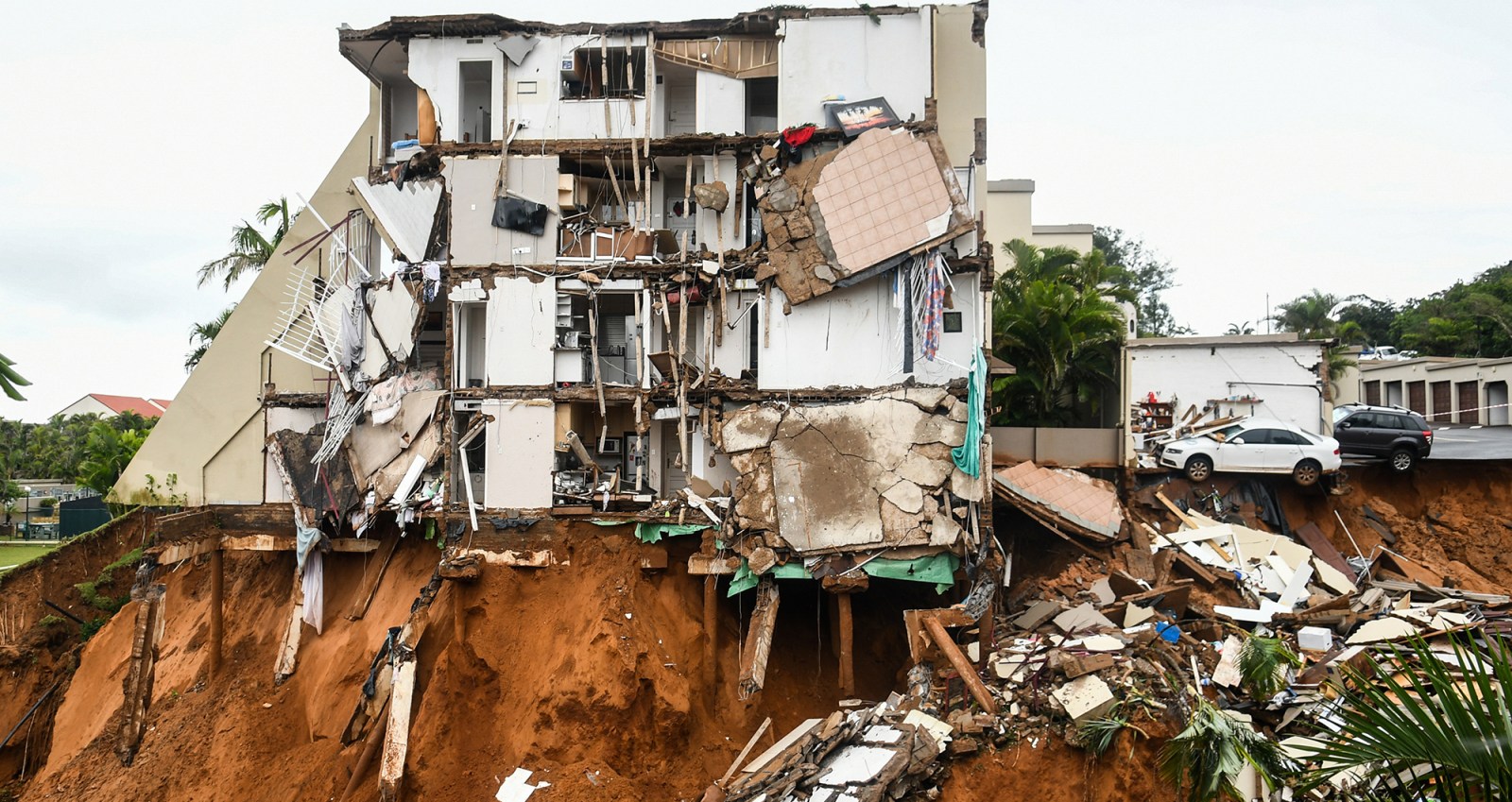 The possible role of several new, multimillion-rand developments in the destruction will form the nub of investigations, and if it is found that they contributed to the destruction, construction work will have to cease.

The eThekwini Municipality has said it expects to wrap up an investigation into the devastation caused by heavy rainfall in the North Coast village of Umdloti — a tourist attraction and prime real estate area — within a few days.

The possible role of several new, multimillion-rand developments in the destruction will form the nub of the investigations, and if it is found that they contributed to the destruction, construction work will have to cease.

Daily Maverick understands that this includes the Salta Sibaya residential lifestyle development, which some residents have blamed for the washing away of properties in massive mudslides.

In a rare instance of unity within the executive committee (Exco) during a sitting on Tuesday, Mayor Mxolisi Kaunda informed his peers that earlier, he had instructed the acting city manager, Musa Mbhele, and the deputy city manager for economic development, Philip Sithole, to accelerate the probe.

“We want them [the deputy city manager and city manager] to expedite and speed up a process of investigation, within a few days, on the causal factors of what has happened in Umdloti.

“If they discover that the new developments are the result of the damage that was incurred in that area, then they have got powers to stop that development, they must do that. But it can’t be a political decision,” said Kaunda.

Umdloti has felt the brunt of the record-setting April downpour and the storm and rains over the weekend. At the upmarket Surfside apartment complex, 26 of the 96 units were completely or partially destroyed as a result of flooding and mudslides. Possibly another dozen multimillion-rand properties nearby are likely to be condemned.

The damage is most marked along the short Bellamont Road, which ends in a cul-de-sac and sits just below the crest of a dune network that, under normal circumstances, offers residents breathtaking sea views.

The accusation, at least by some Umdloti residents, is that the developers of the as yet incomplete Salta Sibiya estate, situated at the top of the dune network, stripped the dune of most of its natural vegetation, which left vast tracts of red soil exposed.

When the heavy rains came, the soil turned into a destructive red sludge. The sludge allegedly then ran down the exposed dune network and overwhelmed the stormwater system, leading to massive erosion and damage that saw homes ripped apart.

“We take note that the communities are alleging that the new developments may be the causal factor of the damage incurred in the area,” said Kaunda.

“When you develop, you are given conditions which include that it must not interfere with the neighbouring community and the households around the area. Let’s allow our officials to do the work. We may be taken to court,” he said.

The developer of Salta Sibaya, Devmco Group, has denied liability, maintaining it adhered to all required regulations.

On a farm adjacent to Salta Sibaya lies the Balize Private Estate, which could also find itself the subject of an investigation. This estate is on a dune above the Umdloti waterworks which was completely washed out with silt, soil and debris on Saturday night.

While the May rainfall, which was classified as a Level 10 storm by the South African Weather Service, was in no way as severe as the deadly April deluge, the brunt was felt along the coastal belt in and near eThekwini.

A family in KwaMashu was evacuated because of a collapsed informal dwelling, while 190 Umlazi residents had to be moved to a local hall. Forty-four units at Waterways Retirement Village in Tongaat were evacuated and Westbrook Retirement Village also had to be evacuated. Parts of the M4 in the La Mercy area — where Premier Sihle Zikalala lives — also experienced a severe washaway, making it impossible to use.

“Before we invest millions and millions of public money into fixing damaged infrastructure, we will need to know how we got here and how we make sure that it is fixed for good. Lots of people have lost a lot of money in their homes, their possessions and their property values in that area. And I think we owe it to them to do all that we can to make sure that we get to the bottom of this situation.”

Official records in the aftermath of the April floods show that 435 people were killed throughout the province, more than 80 are still missing and the lives of more than 40,000 residents were “severely disrupted”. This is in large part due to 4,983 homes being destroyed and a further 8,310 partially damaged. Roads, water and electricity infrastructure were also severely damaged.

The estimated cost to repair the damage — public and private — without the May downpour being added to the tab, sits at R25-billion, with assessments still ongoing.

eThekwini Municipality said in a press statement late on Tuesday night that Kaunda would, on Wednesday, “hand over a site to a contractor that has been appointed to commence with the work of rebuilding the infrastructure that was damaged by the recent floods in the Umdloti area”.

The name of the contractor was not supplied. DM