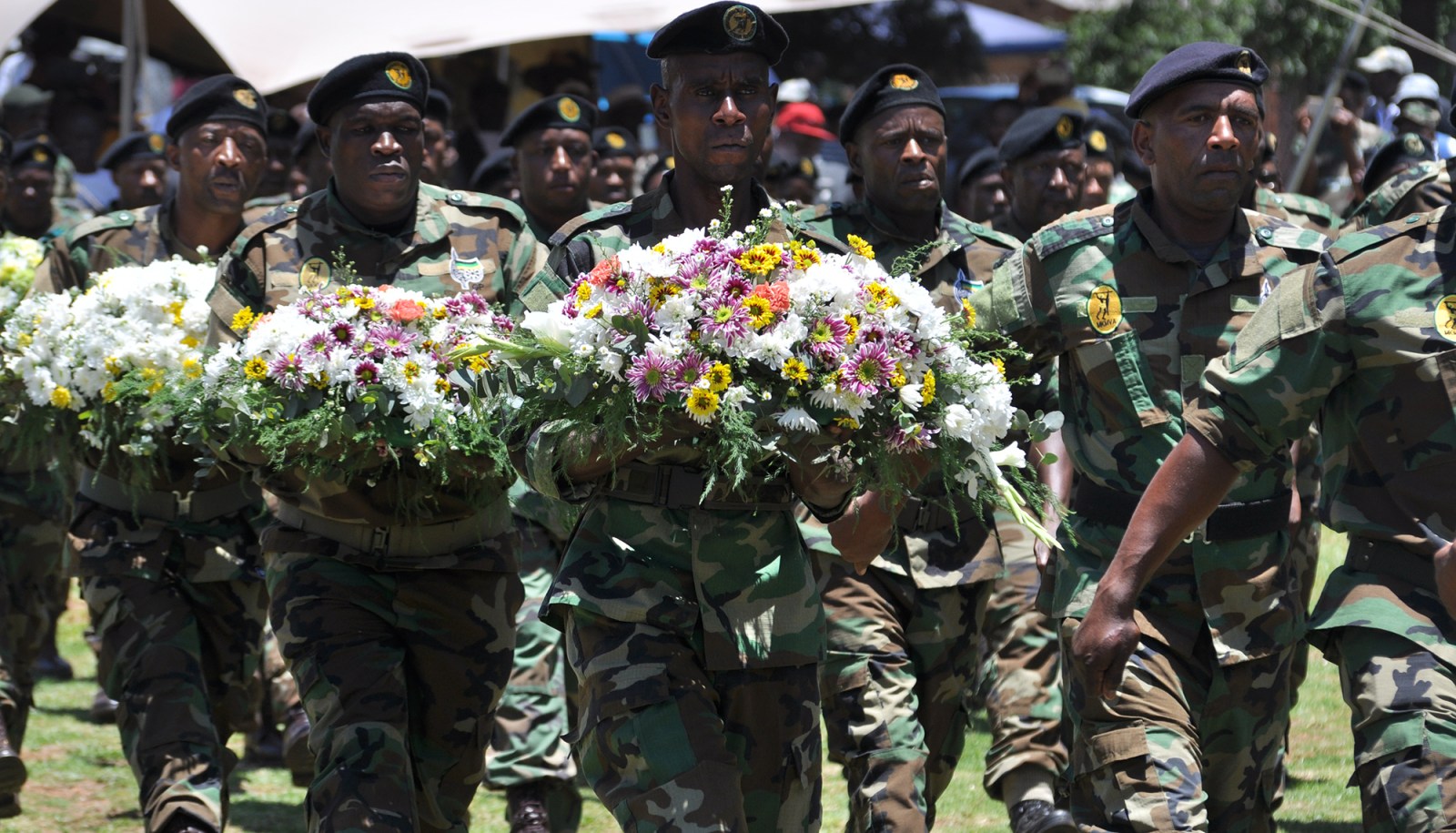 Flowers are carried at the 58th anniversary of Umkhonto weSizwe at the Walter Sisulu Square on 16 December 2019 in Johannesburg. (Photo: Gallo Images / Laird Forbes)

The Umkhonto WeSizwe Liberation War Veterans have settled their differences and announced a programme of renewal and dealing with the welfare of former MK combatants.

A media briefing on Sunday in Kempton Park, Gauteng, by the Umkhonto WeSizwe Liberation War Veterans (MKLWV), detailed the organisation’s plan to unite the ex-MK community after a conference held in East London.

The leadership was nominated by the MKLWV at a joint conference from 27 April to 1 May 2022 at the East London International Convention Centre.

“There were tasks of bringing the community of MK under one roof and that task has been done today,” said the ANC’s head of peace and security, David Mahlobo, at the media briefing held at the Premier Hotel in Kempton Park on 22 May 2022 to present the newly elected interim committee.

The interim committee was “mandated to unite, renew and deal with [the] welfare [of] the community of former and ex MK combatants”, said Mahlobo.

The leadership comes from various detachments and generations of the MKLWV including Luthuli, June 16, Moncada, Isandlwana Modinoge, Young Lions, SDU’S and Bani Molekwane.

At the briefing, Mahlobo said:

“The instruction to the new interim leadership by the ANC is that they unite the organisation, engage and ensure nobody is left behind. It is an interim structure because they bear the important task to carry out the Programme of Action resolved at the conference… and take full responsibility in their period of existence that is not more than two years.”

The interim committee has committed to be accountable, transparent and based on good governance, fulfilling the following objectives:

“From 1961, 16 December MK was formed as a military wing of the ANC. We are not ambiguous about it because we grew up in it… We are social reformers who are here to change the lives of our people. It was never about us, but about the liberation of our people from the bondage of apartheid and colonialism. Back in the day, we would carry weapons of war because we were at war, but then eventually understood our problems could be easily resolved politically,” said Mbulelo Musi, interim National Political Commissar of MK Liberation War Veterans.

Musi added; “Our humble understanding is that if in those times when it was about life and death we could resolve issues without shooting each other; it means going forth as MKVA we can still resolve our differences as we have them… we have been trained to do so.”

The briefing followed the East London conference of more than 500 delegates, organised by the department of military war veterans. The conference came after years of division and had the purpose of bringing everyone under the same roof.

There was some disappointment when former MK spokesperson Carl Niehaus tested positive for Covid-19 and could not attend. Some members also walked out, accusing ANC leaders of “hijacking” the former soldiers’ organisation.

Disgruntled former MK members such as Niehaus have challenged some conference resolutions, including the scope of the conference and the ultimate selection of the interim leadership.

Niehaus said he had gone to East London with the understanding that the gathering was going to be an elective conference, but had turned out to be a consultative conference.

Niehaus said delegates were told a list of names should be proposed to be presented to President Cyril Ramaphosa for a decision on who would constitute “a so-called interim leadership or task team” to lead the MK veterans.

“All of this is not only outrageous in its audacity and disrespect for us as MK veterans and senior cadres of the ANC, but it is also fundamentally against the democratic culture of the ANC and MK. We can never accept such a sham being dictated to us,” Niehaus said.

Meanwhile, the case against 53 military veterans who allegedly held ministers hostage last October for close to three hours, has been withdrawn. The National Prosecuting Authority’s Lumka Mahanjana confirmed last Tuesday that the case had been withdrawn after successful representations by the accused.

This week, the struggle veterans stepped up protests, urging their lawyers to proceed with a class action to compel the government to compensate them for their sacrifices in liberating the country from apartheid. DM