South Africa’s Russian connection, in a time of compl... 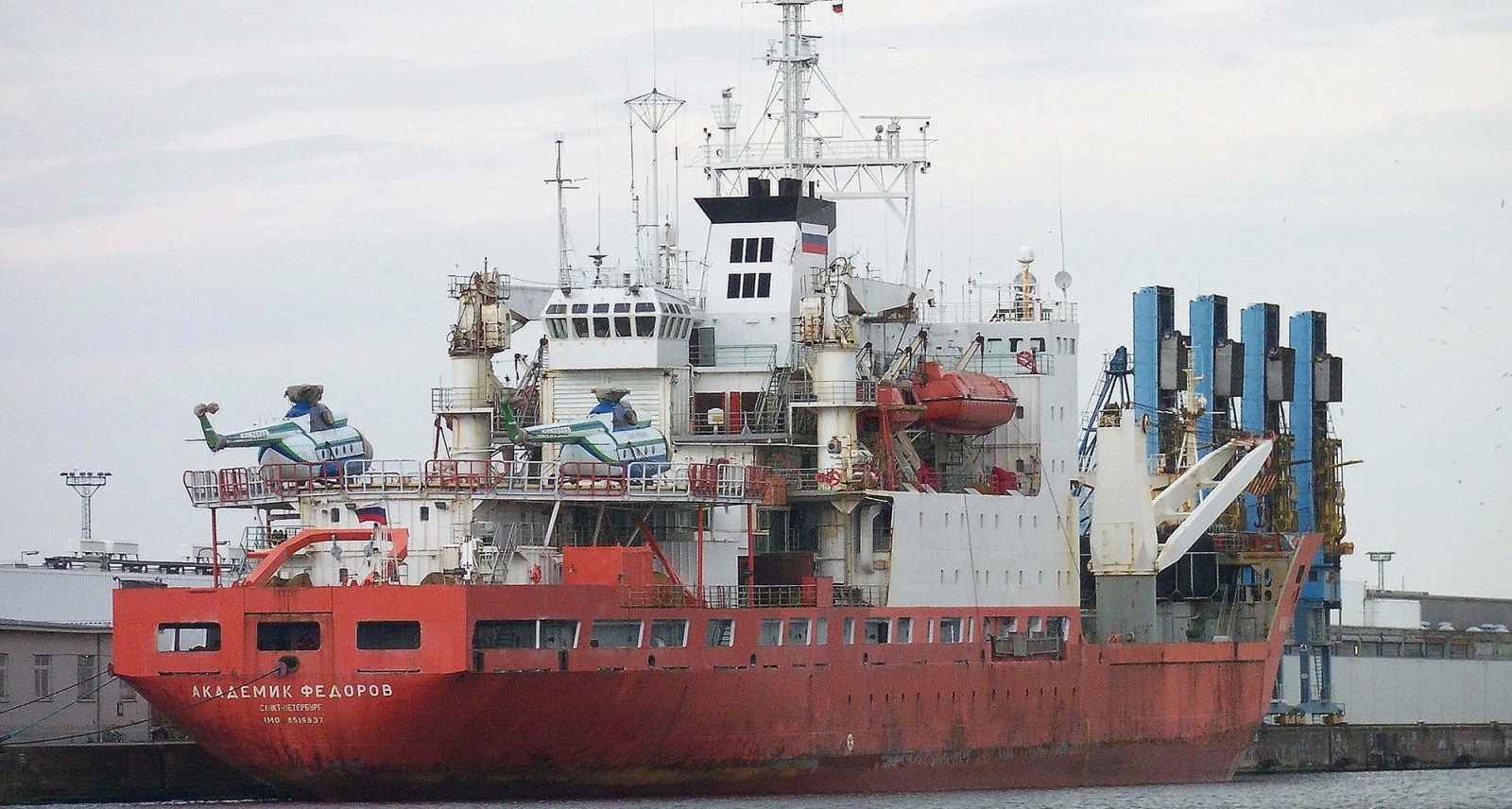 An occasional column based on glimpses of the goings-on at Cape Town port – and how politics and economics are caught between the devil and the deep blue sea.

The Russian flag hangs over the Cape Town Cruise Terminal. Strictly speaking, the white, blue and red stripes peek over the building roof from the Russian-flagged icebreaker Akademik Fedorov, which has been at anchor there since arriving on Wednesday after traversing Antarctica.

It’s the second Russian vessel that has docked at Cape Town port over the past month or so – and is more controversial than the cargo vessel Vasiliy Golovnin, which arrived in early April.

The Akademik Fedorov is a Russian polar research vessel amid the surveying of Antarctic oil and gas reserves that seems to be unfolding regardless of a ban, and which is set to feature at next week’s Antarctic Treaty summit in Berlin, Germany, according to Our Burning Planet writer Tiara Walters.

The Vasiliy Golovnin’s 4 April arrival – in the same berth at the Cape Town Cruise Terminal – coincided with Ukrainian Foreign Minister Dmytro Kuleba calling for the “most severe sanctions” yet against Russia and the seizure of sanctioned Russian oligarchs’ yachts.

To be clear: South Africa has no sanctions against Russia, and so nothing prevents any Russian vessel, cargo or other entity from arriving in the country.

But that’s really not the point. The European Union (EU), UK and US, among others, are closing loopholes in the sanctions regimen against Russian gas and crude oil, and are considering third party sanctions. Crucially, on 15 May, the EU’s renewed set of sanctions on Russia kicked in, supplying motivation to many to review operations so as to avoid falling foul of these.

Simply put, South Africa may well find itself in a deteriorating position at the end of such changed global trading circumstances, perhaps even incurring penalties from possible third party sanctions. If that sounds unfair, sure. But it is realpolitik in a globally connected world.

If South Africa wanted to influence a different outcome, a policy, or at least an official view on how best to deal with the potential impact of widening sanctions against Russia, should have been in the making by now.

That would seem important, given the levels of trade, particularly with the EU, and as South Africa battles to get economic growth and reconstruction out of the doldrums. Never mind the plan and social compacts. War-disrupted global supply lines are already costing South Africa’s citrus sector – Ukraine was a key market before the war – while a scarcity of wheat, sunflower oil and fertilisers is pushing up prices. Significantly.

Instead, domestic policy seems limited to proclaiming a non-aligned stance and calling for a negotiated ceasefire – while criticising the United Nations for failing over Russia’s war in Ukraine.

“The United Nations Security Council has failed the world, proving that it cannot be relied upon to preserve peace and security,” said International Relations Minister Naledi Pandor in her 12 May Budget Vote speech, before segueing into South Africa’s long-standing call for UN reforms.

That won’t do much for Ukraine, or South Africa.

The urgency of facing up to global geopolitics is best illustrated by the saga of the Russian crude oil onboard the Liberia-flagged Elandra Denali, and a couple of days behind, the Elandra Everest.

Both Liberia-flagged tankers’ signalled destination was Saldanha Bay port, on 15 and 17 May, respectively, according to two shipping tracking sites. That’s after taking on Russian crude oil in ship-to-ship transfers just off Gibraltar, according to Bloomberg reports.

The West Coast port is where the Strategic Fuel Fund and a private sector player run crude oil storage tank facilities. But Transnet’s Port Authority in Saldanha clearly said no “nominations” had been received – in other words, no arrivals at the crude oil terminals were booked, meaning no off-loading.

So the old maritime practice holds true – until the cargo is discharged, the journey is not over.

As it turned out, the Elandra Denali didn’t stop at Saldanha Bay port – not even for some fresh fish and chips – but chugged on. All the way to Fujairah in the United Arab Emirates (UAE). It would have been shorter to go through the Suez Canal to the Gulf state of UAE, as the crow flies.

The tankers Elandra Denali and Elandra Everest are operated by the Latvia-based LSC ship management firm contracted, among others, to the energy and commodity trader Vitol, according to Bloomberg.

On its website, Vitol says it shipped 367 tonnes of crude oil and products in 2020. LSC has “43 modern double hull tankers” under its technical management, according to its website.

Neither LSC nor Vitol responded to requests for comment, sent by email and online, on questions ranging from why Saldanha Bay was signalled as a destination to why the Elandra Denali and Elandra Everest would journey the long way around west Africa.

Bloomberg on 13 April quoted a Vitol spokesperson as saying that its Russia oil volumes would “diminish significantly in the second quarter as current term contractual obligations decline”, given existing contracts, and that the intention was to stop trade by the end of 2022.

By all accounts, it seems Russia, in search of money for its war-pressured national purse, has shifted its crude oil trade towards the East. This comes as EU plans earlier in May to ban EU-owned ships from transporting Russian crude oil to third countries were dropped because of opposition from Greece and Cypress until the G7 also agreed to such a measure, according to Bloomberg.

While not all EU countries have imposed sanctions – Hungary, Slovenia and the Czech Republic are among those pushing for a 2024 end to Russian crude oil and gas supplies – 26 counties have, according to Reuters, whose list shows that BP, Shell and TotalEnergies alongside commodity trader Trafigura have stopped buying Russian crude oil, while companies like miner Glencore are not renewing contracts.

As the war in Ukraine continues, with sanctions and an increasing scarcity of wheat and fertilisers – Ukraine provided both, also to Africa – it can be expected that shipping cargoes and routes will shift.

Already, the trend is increasing of vessels either not signalling a destination, or simply stating “for orders”.

That’s what happened with the Elandra Denali and Elandra Everest, signalling Saldanha Bay port, or SDB, as a destination, but then proceeding to Fujairah, UAE, while at least the Elandra Everest indicated its status as “order” on vessel tracking sites.

That UAE port, according to Reuters, has fast become popular as Russian crude oil and refined products shift from Europe, seeing a 125% spike of arrivals between April and May.

South Africa cannot ignore these geopolitical shifts – from trade to politics. Not when its largest trading partner is the EU and its member states, and investment is a key pillar of President Cyril Ramaphosa’s administration.

Back at Cape Town port, after two years of Covid-19 lockdown restrictions, 26 cruise liners are expected this season, generating about R100-million per port call, according to the Western Cape and Cape Town’s tourism, trade and investment promotion agency, Wesgro.

That means that once the Russian icebreaker Akademik Fedorov vacates its berth, potential political pickles give way to a busy money-spinning spot at the Cape Town Cruise Terminal. DM