South African lemon (plus apple, pear and table grape) exports to dry out as Russia’s war in Ukraine rages on 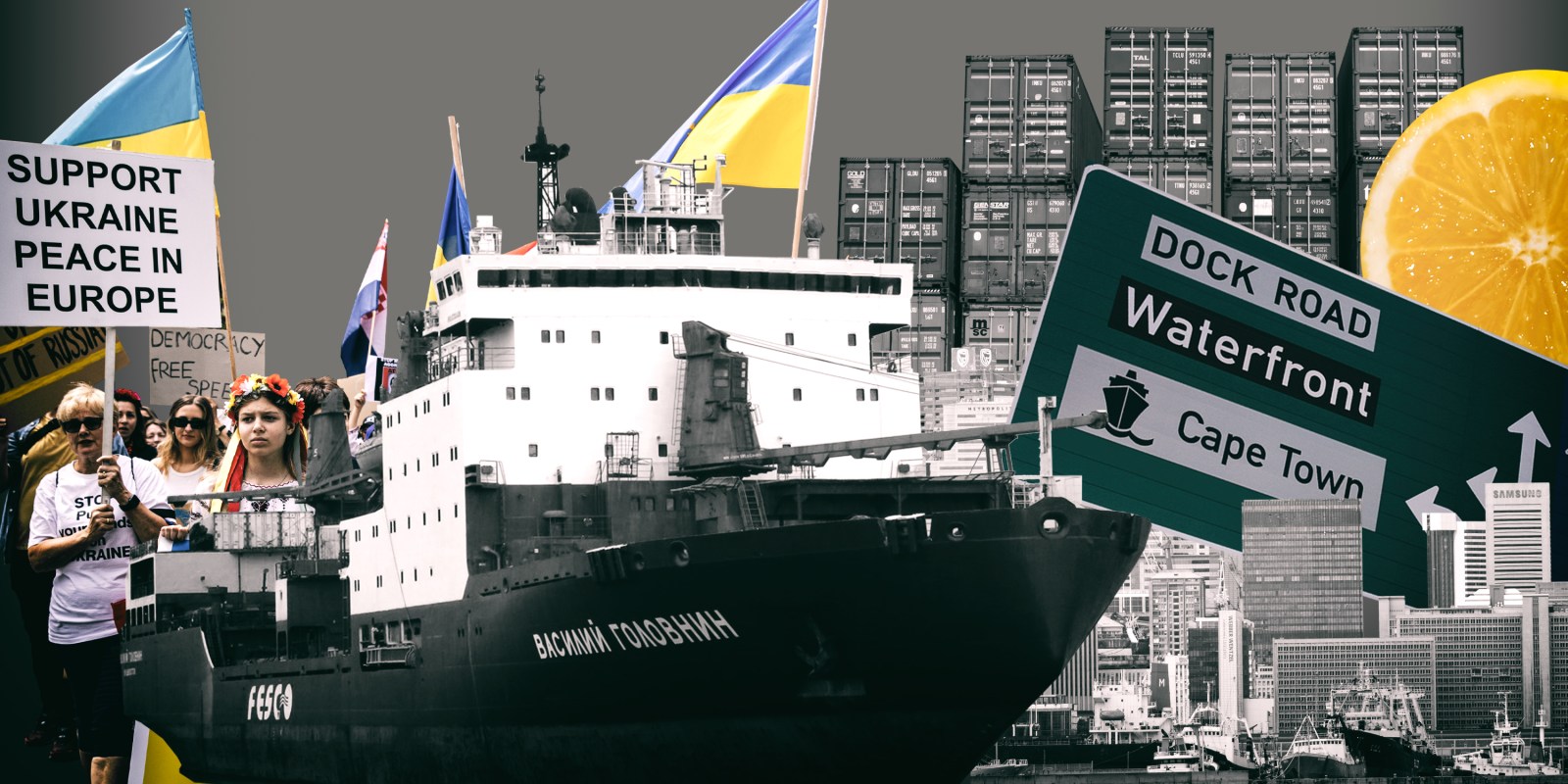 An occasional column based on glimpses of the goings-on at Cape Town harbour — and how politics and economics are caught between the devil and the deep blue sea.

The Russian-flagged vessel, Vasiliy Golovnin, moved into mooring at the Cape Town Cruise Terminal just as Ukrainian Foreign Minister Dmytro Kuleba called for the “most severe sanctions” yet against Russia in Warsaw.

“That’s not me asking,” Kuleba said in a televised briefing after meeting his British counterpart Liz Truss in the Polish capital on 4 April — “it’s the plea of the victims of rape, torture and killings, their relatives and the entire Ukrainian nation.”

Half measures were not enough any more — only the “most severe sanctions” from Nato and the European Union in the wake of dead civilians left lying in the streets of Bucha and elsewhere, while the bombardment of Mariupol continued.

“If you have doubts, reluctance or arguments about the need to keep doing business with Russia, go to Bucha first. Then talk to me,” said Kuleba after not mincing his words on how Russia’s war machinery is fuelled by trade.

South Africa has no sanctions against Russia. Its studied so-called neutrality has ensured the Ukraine war is described as a “conflict” and Russian actions as a “military intervention”, as International Relations Minister Naledi Pandor put it to the South African Heads of Mission Conference on Thursday. No mention of invasion, aggression or even potential war crimes.

And so the Vasiliy Golovnin, possibly named after Russian navigator and vice-admiral Vasily Mikhailovich Golovnin, remains peacefully berthed in Cape Town.  Unlike the super-luxury 70-metre yacht Tango, owned by Russian oligarch Viktor Vekselberg, which was seized in Palma de Mallorca, Spain, on Monday after a US forfeiture request.

South Africa is affected by Russia’s war in Ukraine. Not only by rising crude oil and gas prices, but also by the spiking costs of sunflower oil, wheat and fertiliser. And, crucially, also in exports.

That’s lemons specifically, and citrus generally, just as the season kicks off. Deciduous fruit such as apples, pears, figs and pomegranates are part of the Western Cape’s exports — mostly via Cape Town harbour — to Russia and Ukraine.

In 2021, Russia was the Western Cape’s fourth-largest citrus export market valued at R1.69-billion, according to figures released on Thursday by Wesgro, the Western Cape and Cape Town’s tourism, trade and investment promotion agency.

On the apple and pear front, according to Wesgro, Russia is the Western Cape’s second-largest export market valued at R936-million, getting one out of every 10 pears and apples.

According to Citrus Growers Association CEO Justin Chadwick’s “From the desk of the CEO” 25 March newsletter, “Although South African citrus exports to Ukraine over the past three years have been low, there is a significant upward trend in exports to that destination, most noticeably in lemons and valencia oranges. Unfortunately, the conflict in Ukraine has stopped any exports in 2022.”

South Africa’s citrus exports to Russia and Ukraine are “a hard 10% of the crop”, as one insider put it. With the war now in week five, those exports are potentially left high and dry.

Crucially, South Africa’s citrus sector employs about 140,000 people — from farmhands to export agents. With an estimated 10 dependents per worker, about 1.4 million people could be affected if the 2022 export season is dead in the water because of the Ukraine war.

The ship may have sailed, but Deputy Finance Minister David Masondo told Parliament in mid-March the search is on for “alternative markets” for those one-in-10 South African lemons that would have been destined for Ukraine and Russia.

“Government is committed to using all of the levers at our disposal to cushion South Africans from the effects of the rising cost of living and ensure that our economy withstands these turbulent times,” said the official statement of the 23 March Cabinet meeting — a Cabinet which declines to call what’s happening in Ukraine a “war”.

Even if alternate markets were found, it’s not a simple case of re-routing the citrus from Ukraine and Russia to elsewhere, as this could trigger an oversupply and a price crash. South Africa’s citrus industry could still be negatively affected.

Because of the Ukraine war, global container trade has been slashed by 2.8% while sanctions have halved container traffic at the Russian ports of St Petersburg, Vladivostok and Novorossiysk, according to a Financial Times report on research by the German-based Kiel Institute for the World Economy.

“Ukraine is practically cut off from international maritime trade. No large container ship has called at the country’s most important port, Odesa on the Black Sea, since the outbreak of war,” said the Kiel Institute indicators.

So, sanctions or not, South African lemons may yet reach at least Russia. But it’s not plain sailing; going against the increasingly tight sanctions against Russia may end up negatively impacting South Africa in turn. It’s too early to tell.

What is clear is that Cape Town port, which freights most, if not all, the Western Cape’s fruit and other exports, is part of global supply chains — and these remain under pressure.

Shipping costs have risen, as have disruptions at several congested European ports caused by, among other things, scanning for explosives. Long Beach, California, is far from hunky-dory, and the latest Covid-19 lockdown has left scores of vessels queuing at sea outside Shanghai.

That has knock-on effects for South Africa and Cape Town in particular, where high winds complicate matters further. On Thursday, eight container vessels remained at anchor outside port.

Last week, two days of on and offloading were missed due to strong winds, even as all hands on deck made up the numbers.

Recently 3,000 containers were shifted in a single day. It was a good day. It signals what is possible when running a tight ship. But concerns remain rife over equipment availability and maintenance.

Officially, Cape Town port has no congestion. According to Transnet Port Cape Town Terminals, trucks are supposed to be booked into the system introduced in September 2021. But aligning a potential 24-hour port operation with transport and logistics remains a work in progress.

One weekend in mid-March, trucks queued all along Duncan Road well past midnight, and resumed again around 4am from Thursday to Sunday when the queues dissipated by early evening.

Trucks, often with containers, sometimes park four deep overnight along the R27 that goes through Paarden Island towards Milnerton. Drivers have no access to ablution facilities.

And it is trucks that are the mainstay of transporting goods in and out of Cape Town port. Trains do run, but not that regularly or as frequently as needed to shift high volumes of goods and containers.

Transnet runs red diesel locomotives that push/pull open-top wagons — more than 20 the other day. Actual seagoing containers were spotted on Wednesday night, the precarious rail route nudging past a deep hole that will soon contain the foundations of another posh Waterfront office block — with the concrete base of an enormous crane on the other side. It’s extremely close quarters.

Transnet Port Cape Town Terminals says it will ensure its employees’ safety. How permission was obtained to effectively run a construction site across an active railway track remains unclear. But then other decisions are also opaque, including why Ngqura and Durban ports are picked for private partnerships, and not Cape Town.

It’s an itch that Western Cape Finance MEC David Maynier is set to continue to scratch, alongside a push to improve the efficiency of Cape Town port that is central to the Western Cape economy, from table grapes, apples, wine — and, yes, those citrus fruit and lemons.

With no end in sight to the war in Ukraine, it’s time to batten down the hatches. DM