BAD TO THE BONE 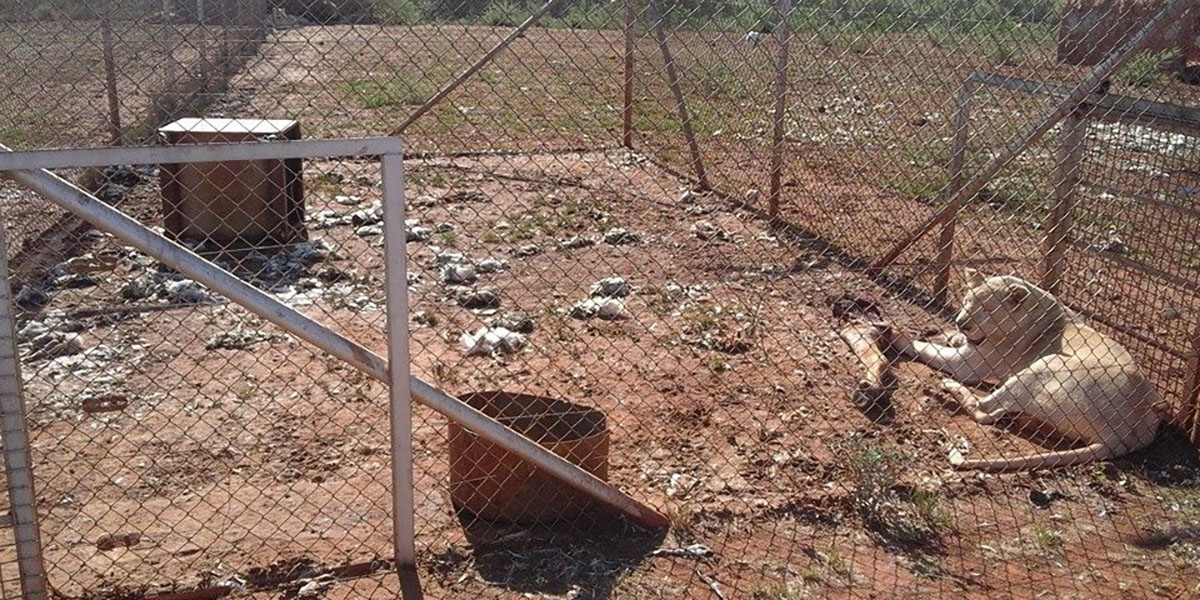 In South Africa, there are up to 8,000 lions being raised in nearly 400 commercial captive breeding facilities. (Photo: Supplied)

Zoonosis, where disease jumps from animals to humans, caused the Covid-19 pandemic. Apart from welfare concerns, the huge number of pathogens in caged and farmed lions is a time bomb waiting to explode.

In South Africa, up to 8,000 lions are being raised in nearly 400 commercial captive breeding facilities. Every now and then the NSPCA is called in by a concerned neighbour or a conservation organisation snaps some distressing pictures. There’s very little control and no scientific studies on the effect of permanently caging wild lions or holding them on commercial farms.

In trying to get a scientific handle on this widespread industry, the NGOs Blood Lions and World Animal Protection embarked on a global search for hard facts on captive lion welfare. The results are disturbing.

Using a novel method, six wildlife scientists reviewed terms related to negative behaviour and health across 91 global studies on lions in captivity. Most of these are related to disease and injury, followed by negative behaviour, mental stress and nutritional concerns. What concerned them was a virtual absence of studies on captive lions in South Africa, a reflection of the hostility of breeders to any interference from “outsiders”.

Lions are bred for tourism interactions like cub petting and voluntourism, trophy hunting or to harvest their body parts (mainly bones) for local and international traditional medicine practices. They’re kept for purely commercial, not conservation reasons.

South African legislation allows for the commercial captive breeding of lions under a patchwork of complex laws and regulations at national and provincial level.

Internationally, African lions are the only species of the Panthera genus listed in Appendix II of the Convention on International Trade of Endangered Species (CITES), allowing managed international commercial trade. South Africa is the only country permitted under these regulations to legally trade in lion bones, provided they are sourced from the captive-bred population.

The export of lion bones has been suspended in South Africa, but between 2007 and 2016 the country exported 70 tonnes to South-East Asia, peaking at more than 1,700 skeletons in 2016.

For many years, criticism and concern have focused on the negative animal welfare impacts and unregulated nature of the industry. When bones are the trade item, the condition of the lions they bear is irrelevant to breeders. Inspections of 95 lion farms during 2016-17 by the National Council of Societies for the Prevention of Cruelty to Animals (NSPCA) found that nearly half of the facilities were housing lions in substandard conditions.

Poor hygiene and inadequate food, the study found, most likely contributed to a broad spectrum of diseases and clinical symptoms, including autoimmune, gastrointestinal, respiratory, musculoskeletal and neurological conditions.

Nutrition-related concerns included anaemia, dehydration and nutrient deficiencies. This, say the authors, could lead to mechanical issues such as malformation and spinal cord degeneration. Dental decay was also a problem. In addition, raising lions in small captive populations can lead to inbreeding, which increases susceptibility to infectious diseases such as bovine tuberculosis.

The premature separation of mothers and cubs and the subsequent bottle-feeding of cubs on alternative milk formula that lacks essential amino acids, such as taurine, and is deficient in vitamin A, is also practised at commercial breeding facilities. The resulting nutritional deficiencies can compromise the immune system and leave animals more susceptible to pathogens.

Two lion cubs confiscated by the NSPCA from a breeder in North West in 2019 suffered from bacterial meningoencephalitis with long-term health implications, as well as the skin conditions mange, pyoderma and alopecia.

According to the study, there are anecdotal reports of “lion abattoirs” where lions are slaughtered by tranquillising and shooting them through the ear rather than the cranium to preserve the integrity of the skull for buyers.

The writers say that, following Minister Barbara Creecy’s intention to adopt the recommendations of her Department of Environment to end the commercial use of lions in South Africa, she should now focus attention on lion farms themselves.

“Increased transparency on the conditions provided at lion farms as well as access to these facilities would ensure proper animal welfare standards are continuously met and that relevant regulations are adhered to during the transition away from the current state of the industry.”

For the record, this is the list of conditions and diseases cited in the studies the report perused relating to lions in captivity. It’s not easy reading, but it tells a story that needs to be known.

Injury and disease include: