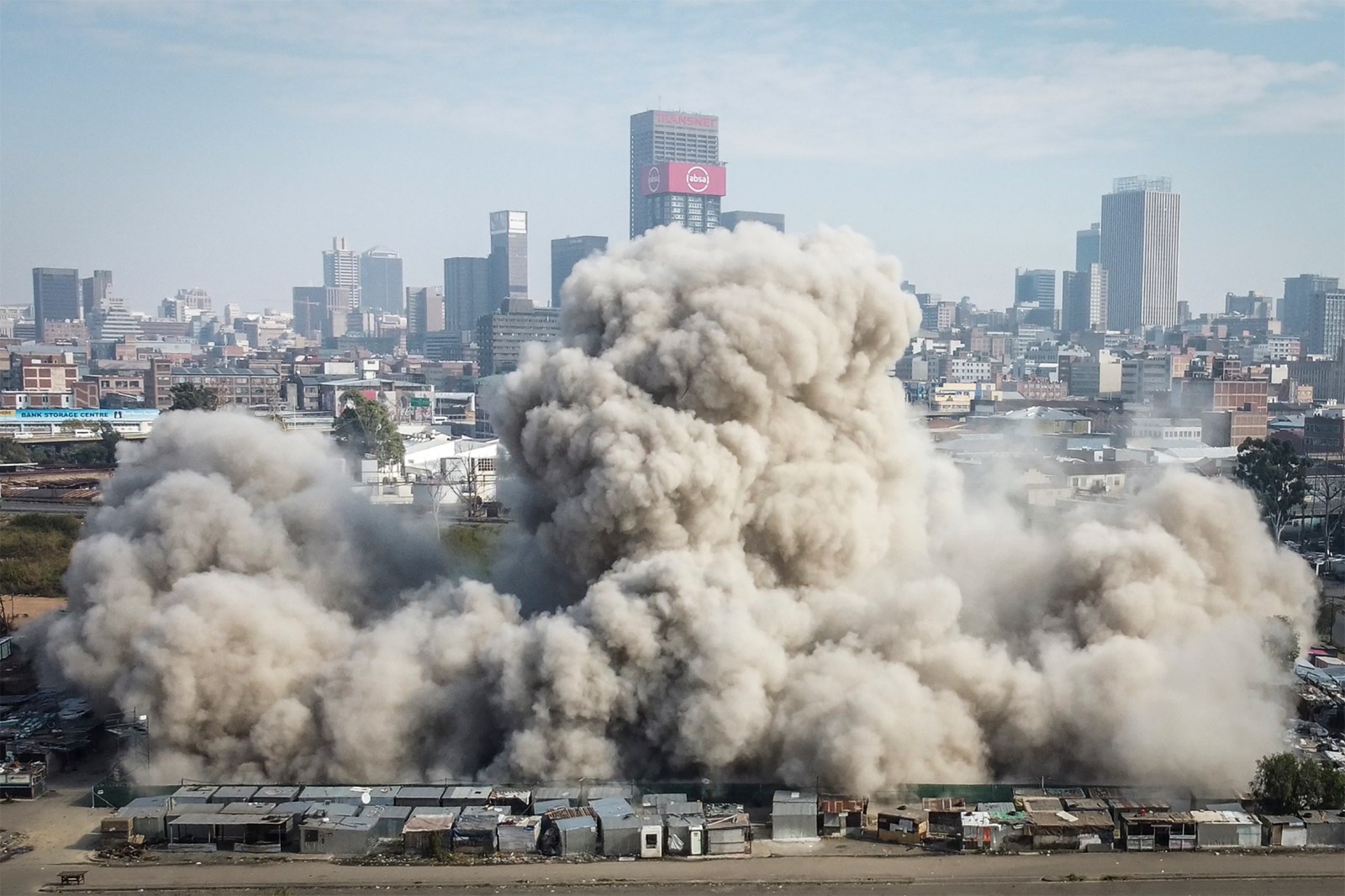 A screen grab from drone footage of Kaserne building after it was imploded on Sunday, 15 May 2022. (Photo: Shiraaz Mohamed)

"It's a crisis." Mayor Mpho Phalatse made the remark after the Kaserne building — the scene of deadly fires in 2021 — came crashing down as part of an ‘inner-city rejuvenation programme’.

The building was condemned in 2021 after three fires caused structural damage. The last fire, in April, claimed nine lives, including a family of three, as reported by Daily Maverick’s Bheki Simelane in “Living conditions in fire-ravaged Joburg CBD informal settlement ‘worse than hell’ ”.

It was decided to implode the building to make way for an expected 1,500 low-cost housing units. Phalatse says these mixed units are part of the inner city rejuvenation programme, in which the area will be developed into a township with amenities including an early childhood development centre and a health facility.

Minutes before the blast, Sne Khanyile of Phoenecian Group, the demolition firm hired by the housing department, gave the mayor, dignitaries and the media a rundown of the process, from a viewing point on the 49th floor of the Carlton Centre.

“The building may be four storeys with a basement [but] it will still take a whopping 783 non-electrical detonators and approximately 150kg of explosives to bring this beast down,” said the contracts manager.

It took four months to prepare the building, but it was reduced to a huge pile of rubble beneath a cloud of dust in just four seconds, after taxis and more than 1,500 shack dwellers within the 200m red zone of the building had been moved.

The company’s bulk earthworks division will now begin to break the rubble down further so it can be reused as a platform substrate for the next stage of the overall development of the site.

Johannesburg housing MMC Mlungisi Mabaso said: “If everything goes according to plan, we are hoping in the next financial year we will be able to bring in work that will be visible for everyone to see.” He also committed to providing electricity to the corrugated temporary structures to prevent illegal connections suspected to be the cause of the April fire.

Khethani Ntetha, a resident of the nearby informal settlement, expressed joy at the implosion: “I am feeling very well. This is minus one problem. I am very, very happy that they are going to provide us with houses. Things are going very slowly with this situation, but I will continue waiting.”

Another resident, Sandile Magwaza, whose shack is alongside the demolished building, says he will continue living in it until houses are made available for them. DM