Abahlali leader describes how Nokuthula Mabaso was shot 4 times in back, then in breast and stomach 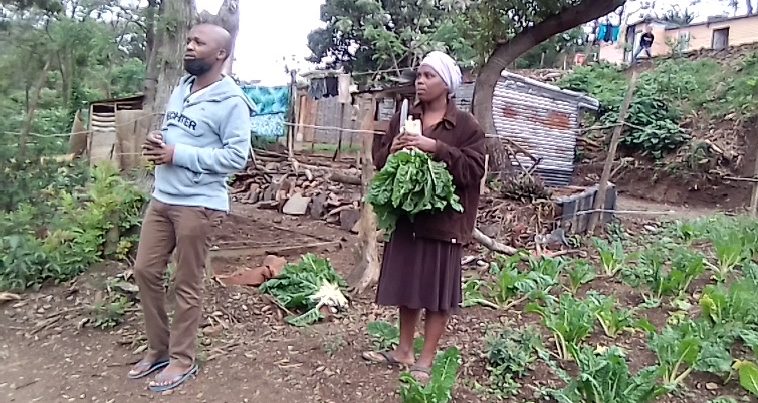 This picture shows Nokuthula Mabaso giving Ayanda Ngila some spinach from the communal garden at eKhenana for him to cook at the place of hiding after he and three others were released from prison where they had been held for six months before bogus murder charges brought against them were finally withdrawn. Ayanda was assassinated on 8 March 2022. Nokuthula was assassinated on 5 May 2022. (Photo: Abahlali Facebook)

Twenty-three members of Abahlali baseMjondolo have been killed over 17 years as a result of the politics of land occupations. But, vowed leader Thapelo Mohapi, ‘we are not going to retreat’.

On the eve of the memorial of slain Abahlali baseMjondolo leader Nokuthula Mabaso’s memorial, Abahlali general secretary Thapelo Mohapi started his talk on “Land Occupation and Politics” by asking everyone to observe a moment of silence to honour Mabaso. Mohapi is taking part in  The Forge’s talks on land in South Africa, which are scheduled to run throughout the month.

“It’s not easy to organise in KwaZulu-Natal not knowing whether or not you will come back; our families are praying every day that we will come back. We are constantly in hiding and our only crime is to fight for the land,” he said.

“We never thought that we would have to fight for what our parents were fighting for, Ayanda [Ngila] was very young, Nokuthula [Mabaso] was very young and the killings continue… we continue to die in the hands of the ANC… two ward councilors were convicted in 2015 and sentenced to life for killing Thuli [Ndlovu]. Thuli was shot seven times in front of her children. When we got there her two-year-old child was crawling in a pool of her blood and did not know what was happening. Mabaso’s child still thinks she’s just in hospital and coming back. We never thought there are people this cruel to kill a mother in the manner they did.”

Mohapi described the eKhanana commune where Ngila and Mabaso were recently shot dead as “a hope” for Abahlali and an example of what communism should be. He lamented, however, that bloodshed was the order of the day for those who live there as a result of members and leaders of the ANC who work with the police, planning the killings of people eKhenana who are using the land communally.

“Mabaso was a woman like any other in South Africa. She was shot four times in the back and to show it was a hit they turned her over and shot two other bullets into her, one in the breast the other in the stomach… those who killed Mabaso knew what they were doing, they did not want to leave her alive. Her cellphone was taken by the gunmen because they wanted information from her. We have informed police but they do not listen to us… she is just a shack dweller and so her life is not as valued, her dignity does not count in the eyes of government, we understand that we are alone as Abahlali.”

He told those in attendance that the fight for land has been steeped in blood because it is very rare for the police and the anti-land invasion security unit to not shoot and kill people to ensure land occupations do not occur.

Mohapi said land should not be privatised and owned only by certain individuals who thought they were “superior to others”. Which is why Abahlali was working on its own ways of establishing its autonomy and sustaining communities using land so that people do not “go to sleep on an empty stomach”.

Mohapi told the audience that one of the things that encouraged Abahlali’s struggle is the courage of its members: “We had thought the community would give up after the killings of the past two months but they didn’t.”

He said the price of land in KwaZulu-Natal was politics and people paid for it in their blood. He recounted an incident in the Ekukhanyeni informal settlement where, before people had even begun occupying the land, a young man was shot in the back of his head as he ran from the City of eThekwini’s anti-land invasion unit. To date no one has been charged for the killing, he added.

According to Mohapi the eKhenana land is contested because the ANC wants to commercialise it, whereas the community wants it to be communal in order for them to sustain themselves with a community garden which everyone has a hand in tending while the harvest is shared. “When you go to the eKhenana community hall there is a writing which says ‘Steve Biko lives’. When Ayanda Ngila was killed he was wearing a T-shirt with a Steve Biko that said: ‘It’s better to die for an idea that will live than to live for an idea that will die.’” This, he explained, demonstrated the ideology behind the killings in eKhenana.

Mohapi asserted that people living outside of the commune saw this way of life as a threat and that if the idea grows the ANC will not be able to canvass votes from people by bringing food parcels, promising to build houses and giving people electricity and water. “The ANC sees informal settlements as banks for votes and make promises they won’t fulfil. But if people can feed and look after themselves, have their own water and electricity and garden providing food for themselves… then the ANC has no place to come and lie to the people and make empty promises.”

Mohapi said Abahlali is building power of the impoverished from below and that it was not a movement that exercised power from the top down. “We are not going to retreat. At the general assembly over the weekend people said they would rather die than submit to the corruption of the government of the ANC.

“After the floods families still haven’t found their loved ones, people in informal settlements have been washed away, there is an eight-year-old still not found, bodies are found as people are walking along river streams yet there are people seeing an opportunity to make money out of people’s pain. When activists like us say this is not right we are killed for exposing government corruption.

“When we went out to give food parcels, people were fighting over food. I asked myself if this is the South Africa of the 21st century where people have to fight for food. We must occupy land because the government of the day has failed us… even if we know we are facing the barrel of the gun.